Houston Astros
The Astros have essentially been in limbo since the 2009 season. After the retirements of Jeff Bagwell and Craig Biggio, the “Killer B’s” were no longer, and the Astros lacked not only an identity, but overall talent as well. After a couple seasons of stagnancy, new owner Jim Crane completely revamped his front office, the most important change coming at general manager. Crane hired Jeff Luhnow to the position with a single request: Get us back in contention. With the hiring of Luhnow, Crane brought in a man who didn’t care to keep up with appearances. The plan was to do his best to insure the Astros would be ready to win by 2017, essentially, a 5 year rebuild. In an interview with si.com, Luhnow commented on how little winning meant in the early stages of the rebuild: “When you’re in 2017, you don’t really care that much about whether you lost 98 or 107 in 2012. You care about how close we are to winning a championship in 2017.” After wild success as the head of the St. Louis analytics department, this is the attitude Lunhow brought to the Houston organization. It didn’t matter how ugly things got, just as long as the ends justified the means. Lunhow inherited a team after the 2011 season that only managed to win 56 games, and that also had one the worst rated farm systems in all of baseball. However, Lunhow and his team, a group you would expect on the cover of The Wall Street Journal rather than at the head of a baseball organization, completely turned around the downward spiral that was the Houston Astros. Today, Houston has a farm system that has produced impact players at the major league level with more waiting in the wings. However, the success hasn’t been appreciated by all, especially a few disgruntled former Astros that saw Lunhow’s analytical approach as dehumanizing. One player in particular, former Astro’s starter Bud Norris, has been outspoken against Houston’s analytically based system. Whether it’s popular or not, Houston currently leads the AL West and is tied for the most wins in the American League.

Dee Gordon
After spending the last few seasons bouncing around the Dodgers’ organization and solidifying himself as an everyday second baseman, Dee Gordon was traded

to the Marlins this past offseason, an offseason that saw the Marlins seemingly aiming at a playoff run. At the time, the move seemed to be a bit confusing, mainly because Gordon quite simply hadn’t played much better than replacement level to this point in his career. Gordon has made the Marlins’ front office look great, to this point at least, as he currently leads the National League in Wins Above Replacement. Although his defense has improved, his offensive explosion has boosted him to the top of the leaderboards. Gordon’s peripherals don’t favor an extended run of success however, as he currently has a whopping .466 batting average on balls in play (BABIP), and also has one of the lowest hard hit rates among major league regulars. Unless Gordon is suddenly able to develop some occasional power to go along with his 20% infield hit rate, his success in the long term is unlikely to continue.

Boston Red Sox
After following up their emotional 2013 World Series Championship with an extremely disappointing 2014 campaign, Boston spent much of this past offseason trying to make it back in to contention. After spending big money on their offense, the biggest signings being Hanley Ramirez and Pablo Sandoval, it 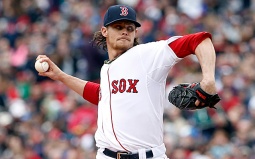 seemed like Boston’s pitching staff would simply have to coast along as the offense did a majority of the heavy lifting. Unfortunately for Boston, the pitching staff has been a living nightmare, and the offense hasn’t been consistent enough to keep them afloat. According to Fan Graphs, the offense has a weighted runs created plus (wRC+) of 89 this year, a statistic that tries to quantify the amount of runs a player has created for his team normalized for the era. The league average for wRC+ is 100, so Boston has actually been 11% worse than league average at creating runs to this point in the season. However, if the Boston offense has been inconsistent, then the pitching has been simply atrocious. Boston currently holds the 7th worst Fielding Independent Pitching average (FIP) in the major leagues. Their FIP of 4.41 has actually outperformed their team ERA of 5.05, so the defense isn’t helping either. If Boston has any hope of turning this season around, it’s safe to say that their production needs to increase in all facets of the game.

Chase Utley:
When it comes to baseball, as with all sports, the inevitable takes place, and the aging curve begins to take its’ toll. After a peak in the late twenties, most players begin to steadily decline until they decide to call it quits and ride off into the sunset. This season, Chase Utley has seen decline in the truest sense and currently looks like a shell of the player he was even just a season ago. Just last season, Utley posted a WAR (Wins Above Replacement) of 4.5 which was 7th among second basemen and generally considered All Star Level. This season has seen his value plummet, as he has been the worst second basemen in the league so far, accumulating -1.0 WAR. At this point, it would actually benefit the Phillies to be playing a replacement level player off their bench or from the minors. Although he currently has hit in to some bad luck posting a BABIP of .118, his abysmal hard hit rate shows that he quite simply isn’t hitting the ball as hard as he used to. Although it’s early in the season, it appears that Utley may be closer to riding off in the sunset than it seemed, which as a Braves fan makes me happy, but as baseball fan, makes me sad to see one of the best second basemen of his generation fall to this level.

One response to “MLB Hits and Misses”