If You Catch My Draft

With the baseball season in full swing, the Rule 4 draft is quickly approaching. Although it doesn’t get the same publicity (or viewership) as other major sports drafts, the MLB draft is one of the more interesting to dissect. Aside from the occasional phenom like Bryce Harper, there are very few times you can look at a draft class and say for sure that a player is going to make a huge impact on a franchise. Some people would even argue that it’s a crapshoot because it’s impossible to project how an 18 year old will develop, or how they will adjust to the major leagues. The scouts in baseball have to put in a lot more hard work, and they are often projecting how players will develop for years to come before they ever get a chance to make an impact at the major league level. If there is one theme to this draft class, it’s the abundance of middle infielders, and the lack of pitchers. Here are ten of the top players that will be drafted, with the abundance of middle infielders being heavily represented on my list. My list takes into account where I think the player will go and is not necessarily based on who I believe to be the best player.

Swanson seems to have it all. A great defender at short to go with a great bat. Projects to hit for power, however, with that power comes the tendency to often swing and miss. He has great on base tendencies and certainly projects well as an above average everyday shortstop. Swanson has starred in the toughest collegiate baseball conference, and he seems to be on the fast track to the major leagues.

2. Dillon Tate: RHP, UC Santa Barbara
Tate is a work in progress, and just went through his first season as a starter at the collegiate level. He offers an array of pitches, but his fastball and slider are the only ones developed enough to be considered “plus” at this point. Although most college pitchers are taken because of their major league readiness, Tate certainly has some work to do before he ascends to the majors. He may have the best upside amongst pitchers in this draft, but we will more than likely have to wait to see him pitch at the major league level.

3. Brendan Rodgers: SS, Lake Mary High School, Florida
Rodgers has good size for the position at 6’1”, and the upside is tantalizing. He is a great defensive player and certainly projects to stay at short rather than being moved to second or third. Based on his size and room for improved power, Rodgers has been compared to Troy Tulowitzi, but he’s a bit smaller than Tulo. There have been questions about Rodgers’ bat speed, however, he has played against some of the toughest high school pitchers and thrived, and is probably be the best prospect in this year’s class.

4. Alex Bregman: SS, Louisiana State University (LSU)
Bregman is smallish and probably doesn’t stay at short. He is a great pure hitter who will get on base, and if he moves to second, he will be a great everyday player. Scouts rave about his work ethic, and that translates well for a player that will have to adjust to a new position.

5. Daz Cameron: OF, Eagles Landing High School, Georgia
Daz, like several other players in this draft, is the child of a former MLB player. Although he doesn’t boast the same physical prowess of his father, Cameron is great natural athlete that has a great shot to stay in center. He has above average speed and projects to be an above average hitter.

6. Garret Whitley: OF, Niskayuna High School, New York
Whitley is a natural athlete that has the potential to develop above average power. He has dazzled against his competition in central New York, where he hasn’t really been challenged by overwhelming talent. Whitley will have to adjust going forward, and his hit tool definitely is a work in progress.

7. Tyler Stephenson: C, Kennesaw Mountain High School, Georgia
Georgia is always a hotbed for high school baseball talent, and Stephenson is the second Georgian to make my list. He has the raw tools, including a great arm behind the plate to go with his great power. The rest of his defensive tools are behind his arm, and high school catchers are often difficult to project. There have been multiple rumblings that Stephenson may go at one to the Diamondbacks, and that speaks to the amount of raw talent he possesses behind the plate. 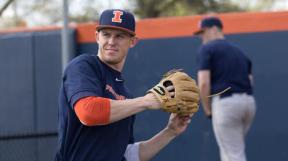 Although Jay has been used as reliever this year by the Illini, scouts seem to project him to be in the middle of a major league rotation. Jay flashes four pitches, and as long as he continues to develop his repertoire, he will be able to compete and work his way forward despite his small frame. Left handed pitchers are always a sexy pick, and I wouldn’t be surprised to see Jay taken in the top five.

9. Mike Matuella: RHP, Duke
After undergoing Tommy John surgery, Matuella was quickly taken from the top of many draft boards. Matuella will probably end up going late in the first round, however before his surgery, he was proving to be a great prospect. If he can recover, he has great upside, and may in fact end up making a GM and his scouts look extremely smart for taking a chance on him.

10. Kevin Newman: SS, Arizona
After doing research, I have seen Newman all over the place in draft rankings. He has a great bat and projects to be great hitter whether he stays at short or is moved to second. Newman is hard to strike out and has room to develop a little power. I like the bat and think that having a consistently good hitter like Newman at a defensive position like shortstop is promising.