Beanpot Meltdown: What the Hell is Going on in Boston? 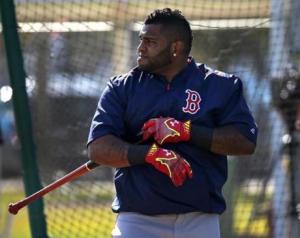 Pablo Sandoval signed a 5yr/$95 million contract with the Boston Red Sox this past offseason. He is hitting .270 through 59 games as of Friday. Barry Chin/Boston Globe Staff

The Red Sox are an AL worst, 29-39 and have had a flurry of activity around the team recently. This week the Red Sox starting 3rd baseman Pablo Sandoval was benched for liking some Instagram posts mid-game. When asked by it by the media Sandoval simply stated that he “did it while he was in the bathroom”. Even more interesting, during a recent media encounter the face of the franchise David Ortiz was asked if he would be willing to waive his trade clause. He responded by saying, “No chance, this is the team I’ll be with for the rest of my career”. Which is a good thing if you’re a Red Sox fan, but how did it get to his point? 2 years removed from your 3rd World Series since breaking the curse and you have a 100 million dollar player on the john playing with his phone and now reporters are insinuating that the player that’s been the face of your franchise for the past 11 years wants out of town. In the words of the great Vince Lombardi, “What the hell’s going on out there?!”

In my best examination, this season is a result of the miseries of last season. Coming off the most improbable World Series run maybe ever, the Red Sox lost a player that has been a staple to the start of the lineup for many years in Jacoby Ellsbury. On December 4th 2013 Ellsbury signed a 7 year, 153 million dollar deal with the New York Yankees. I’m not saying that people were expecting Jacoby to stay on the team but for him to pull a wanna-be Johnny Damon and leave the Sox and go play centerfield for the Yankees hurt a little. Fast forward to the middle of last season and the Sox are battling injuries all over the lineup, they knew it was time to make a change. So on August 1st 2014 the Red Sox pulled the trigger on a blockbuster deal that sent Ace of the staff Jon Lester to the Oakland Athletics in return for Outfielder Yoenis Cespedes, which at the time was a masterful trade. Yoenis had 2 years left on his deal and Jon Lester was clearly jonesing to come back to the Red Sox after the contract year was over.

A magician somewhere once said “Not everything is as it appears to be”. The Red Sox flipped Cespedes for right handed pitcher Rick Porcello. Not too far after that Lester narrowed his 2 team search down to the Chicago Cubs and the Boston Red Sox and in a matter of hours after that he was signed to play the next 6 years of his career in the Windy City. The gamble of trading Lester’s value away and expecting him to come back bit the Red Sox bigger and a lot harder than most expected.

So how did the Red Sox recover from having this well thought out methodical plan blow up in their face? They didn’t. They have all the money in the world to spend and they replaced an Ace pitcher with Wade Miley who started the season with a 1-4 record (has since recovered to 6-6) and has a 4.88 ERA. Miley’s biggest win of the season came against manager John Farrell in a screaming match after the Baltimore Orioles completed a 3 game sweep of the Red Sox.

Just 2 weeks ago the Red Sox and GM Ben Cherington relived Juan Nieves of his duties as pitching coach. Nieves, just 2 seasons ago had the Red Sox at a 3.67 starting pitcher ERA, which was good enough for 6th in the league. This season the Sox started out with an ERA of 5.54 which is good enough to have them as the worst pitching team in the American League. 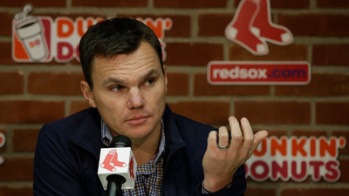 So here we are with Ben Cherington looking for scapegoats amongst his own clubhouse which, believe it or not, creates turmoil and an unfit work environment for the rest of the employees. How is it fair that Nieves lost his job because Cherington was unable to bring in a number 1 starter for a team that has fans that expect to compete for a World Series every year? Ben Cherington thought he could cover up his inability to bring in a suitable number one pitcher by paying a handful of hitters such as Sandoval (5 years, $95 milion) and Hanley Ramirez (4 years, $88 million) to come in and make Fenway park a home run derby every night. Now that this Sandoval news is out there and the clubhouse looks like a mess, I predict it’s only a matter of time until Cherington finds another person to fall on a sword for him, John Farrell. A man who was able to rally a team full of cast off and journeymen (such as Johnny Gomes, Shane Victorino and Mike Napoli to name a few) to not only go from worst to first in the AL East but to win the World Series. When the hammer comes down on John Farrell there will be a lot of disgruntled Red Sox fans just as there will be fans that say he never should’ve been the manager of the team. When stories like that break, the feelings are felt don’t let anyone fool you. This wasn’t John Farrell’s fault. As the dog days of summer come upon us and summer turns into fall and the pennant races start heating up weekly with less and less Red Sox buzz, the team in Boston is going to become a circus act. And there’s no one else the Red Sox fans have to blame but Ben Cherington.