With the NBA Draft fast approaching (Thursday at 7:30 pm on ESPN), Hard Foul Sports writer Steve Stich shares his ideas of how the 1st round will go. 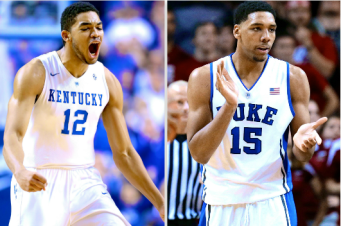 1. Minnesota Timberwolves: Karl-Anthony Towns, PF/C, Kentucky
Karl-Anthony Towns should be an easy selection for Flip Saunders and the Timberwolves to make. Towns can shoot the ball from beyond the paint and also protect the rim, two things that separate him from Okafor for the number one selection.

Minnesota should have a good young core for the foreseeable future with Andrew Wiggins, Towns, Ricky Rubio, and Zach LaVine. The Timberwolves could quickly become known as Lob City 2.0 with all of these athletes they will have at their disposal.

2. Los Angeles Lakers: Jahlil Okafor, C, Duke
There have been rumblings that the Lakers have become enamored by Kristaps Porzingis and D’Angelo Russell, but at the end of the day, Okafor will be the most likely selection. The Lakers are known for having dominant big men, and Okafor has the ability to average 20 and 10 in this league. Many wonder if Okafor has the ability to play in the new fast paced NBA, but his ability to score with his back to the basket is rare to see in today’s game and should not be overlooked.

3. Philadelphia 76ers: D’Angelo Russell, PG, Ohio State
General manager Sam Hinkie is always a wildcard on draft night. He may try to trade back and gain more assets because that’s what he seems to like to do. However, the talent that Russell has is too hard to pass up. Even with the latest news about Joel Embiid’s health problems, the 76ers should take the best player available on the board, and the best guard in this draft class.

4. New York Knicks: Kristaps Porzingis, PF, CB Sevilla
The Knicks are hoping that one of the three names above, fall to them here at pick four. A trade here is very possible, but if they make a selection here, Porzingis makes sense. No other player has generated as much buzz as Porzingis has in the last few weeks, and he could end up being the most skilled player in this draft class. Phil Jackson may deem that his potential is too much to pass up.

5. Orlando Magic: Justise Winslow, SF, Duke
Winslow has the ability to defend multiple positions, while also possessing the ability to be an effective slasher and finisher in the NBA. If he can improve his jump shot, then he could become an all-star. If the Magic re-sign Tobias Harris, then they could have a nice young core group of players in Winslow, Harris, Elfrid Payton, Victor Oladipo, and Nikola Vucevic.

6. Sacramento Kings: Emmanuel Mudiay, PG, Guangdong Southern Tigers
Mudiay slides a little here, but he should fall no further than sixth. The Kings already have Darren Collison, who did a nice job for them last year, but the upside of Mudiay is too great to pass up. Had he gone to SMU instead of playing in China this past year, it is possible that we could have been talking about Mudiay in contention for the number one overall pick instead of number six.

7. Denver Nuggets: Mario Hezonja, SF, FC Barcelona
Hezonja may be the most confident/cocky player to come into the NBA in a long time. ESPN’s Chad Ford has compared Hezonja’s attitude to Kobe Bryant, something that new coach Mike Malone would welcome. His athleticism and shooting ability should possibly have him going higher in the draft, but since he played overseas, he slides to number seven.

8. Detroit Pistons: Stanley Johnson, SF, Arizona
Coming into the season, it was possible that Johnson would be a top five pick. The Pistons need depth at the small forward position and gladly take Johnson. A potential lock-down defender Johnson can come in immediately and help coach Stan Van Gundy try to get the Pistons back into the playoffs.

9. Charlotte Hornets: Willie Cauley-Stein, C, Kentucky
While Charlotte desperately needs perimeter shooting, the defensive ability of Stein is too much to overlook. He can play alongside Al Jefferson, and defend any position on a pick and roll. Stein could go earlier if a team like the Boston Celtics decides to trade up and select him.

10. Miami Heat: Sam Dekker, SF, Wisconsin
Luol Deng has the ability to be a free agent, and may leave if he can secure a longer term deal. If that’s the case, then Dekker has the potential to come in and replace some of his production. Devin Booker is another possibility here to add more shooting.

11. Indiana Pacers: Myles Turner, C, Texas
Turner has the ability to protect the rim while also able to shoot from deep. He underperformed a little in his freshman season at Texas, but all the tools are there for him to succeed for the Pacers. If Turner develops into the player that the Pacers hope he can, then he could replace Roy Hibbert in another year when he will be a free agent.

12. Utah Jazz: Frank Kaminsky, PF, Wisconsin
Kaminsky provides a proven stretch four, something they do not currently have. He can come in and help space the floor, and hit shots to take some scoring pressure off of Gordon Hayward and Derrick Favors.

13. Phoenix Suns: Devin Booker, SG, Kentucky
Booker may be the best shooter in this draft class. He has the ability to go higher than 13, but the Suns gladly take him to help create more space for Eric Bledsoe to operate in the lane. Cameron Payne and Trey Lyles could also be in play here for the Suns.

14. Oklahoma City Thunder: Cameron Payne, PG, Murray State
Payne did not garner as much attention as other college players because he went to Murray State. He was one of the best scoring guards in all of college basketball last season. The Thunder are in a positon to sit back and take the best player available here, because they will not have much cap room to operate in free agency.