How could a dynamic forward such as Evander Kane be stuck in the shadows during the summer of 2015? Tim Murray made a bold move on February 11th which reminded fans that the general manager is on a different side of the spectrum of dithering Darcy Regier, the GM he is replacing. The new general manager proved his uncanny ability to take risk that has a high payout. Tim Murray states his willingness to enhance the role of the former Winnipeg star turned outcast:

Despite the positive news, Kane’s incompatibility during his time with the Jets is something all Sabres fans should be aware of for next year.

Below are four key factors that played a role in Kane’s escort out of Winnipeg: 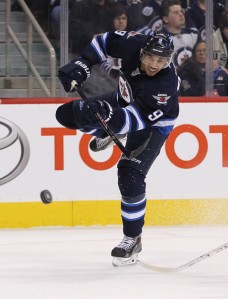 When scanning past statistics Evander appears to be a player that has fallen out of relevancy after a contract year. Kane was never able to put up numbers that reflected a player who had reached the 30 goal mark in 2011-2012. His 2013-2014 campaign was far off, he fell short of the 20 goal (19) mark and only put up 41 points in a full season. Tim Murray and other general managers were aware of his position on the trade block due to his status as a lineup reject. Murray likely competed with other bottom feeding teams that had hopes of securing a favorable spot in the McEichel sweepstakes.

A season in review proves that Kane’s injury and departure came with little regret from the Winnipeg front office. For Buffalo it’s a trade that shelved an athlete with a tremendous work ethic who will be hungry to get back on the ice and brought in an addition to help solidify the defense in getting D Zack Bogosian. The trade also lightened the overflowing prospect pool, swapping Joel Armia and Brendan Lemieux for NHL players that can contribute immediately. Most onlookers forget that you can only sign a limited number of draft picks. Kane is a roster piece that plays through injury, shells out roster leading hits, and has a monstrous workout regimen. He is a man you want on the roster, his example is one that the young squad can feed from. Referring back to statistics only, Kane’s recent plateau does not bode well for his current contract status but Sabres fans should have high hopes that he will work hard for a future payout. On the opposite end Stafford and Myers were able to make contributions to a Winnipeg team that serves as inspiration to current basement dwelling teams. The Jets were able to complete a playoff push that impressed and satisfied long deprived fans.

Evander is a young guy that represents the upcoming generation. He has built a brand founded on cheeky comments, social media accounts promoting his high society status, and a lifestyle that would make anyone jealous. His unique attitude and gameplay is in my opinion very comparable to a refined Patrick Kaleta but with talent and scoring touch. Moving on, Zach Bogosian has a defensive prowess that will land him in an anchor role on the Buffalo blue line. Zach and Evander are top five picks that have an enhanced amount of league seniority compared to the two prospects dealt to Winnipeg. Joel Armia is among a talent pool which received high praise from Sabres scouts and Rochester American followers. Lemieux had a cold stance against Buffalo since being drafted, he never welcomed a chance to begin his career in this area. Both of the former Jets will play a key role in this upcoming 15 – 16 campaign which begins with a 7pm puck drop in Pegulaville Thursday, October 8.