Patrick Kane: What We Know So Far

Don’t push me off of the podium too quickly. It may not be news directly affecting the Buffalo Sabres organization. However, it adds to a growing list of poor behavior from prominent NHL team leaders and could have added impact on Ryan O’Reilly’s league punishment. He remains at the forefront of bad offseason press stemming from the Eastern Conference. Now Patrick Kane has decided to represent the Western Conference. With Kane entering the scene it’s wise for Buffalo and Chicago fans to prepare for the Commissioner’s hammer. I could see Gary Bettman dealing a harsh, maximized suspension or fine to those that brought a poor image to the league during offseason to go along with any legal ramifications. On August 6, 2015 two law enforcement sources told The Buffalo News that Patrick Kane was being investigated by Hamburg police for an alleged rape incident. This incident was alleged to have occurred between the dates of Saturday August 1, 2015 – Sunday, August 2, 2015.

Kane takes on the persona of a glorified civilian during his offseason. He is a New York state homeowner, beer league hockey enthusiast, golfer, and a frequent night club presence. Seasoned university attendees, graduates, and other Buffalo residents have had encounters with the high profile athlete. He takes advantage of his status in the Queen city, accepting any complimentary drink or favor thrown his way by an admirer. It’s not rare find the professional athlete nodding to the beat of an urban playlist standing on VIP seating with both hands occupied by a mixed drink.

Kane signed an 8 year 84,000,000 contract with the Chicago Blackhawks that is set to begin in the upcoming 2015 – 2016 NHL season. He is one of the highest paid players in the national hockey league along with his teammate Jonathon Toews. Kane and Toews pull in a higher annual salary than Sidney Crosby, the two forwards are out earned by Predators defenseman Shea Weber. 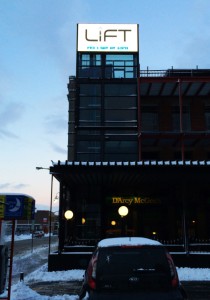 Mark Croce (Buffalo Sky Bar owner) and several employees noticed the Blackhawks forward on the top story of the downtown club with a young woman (Image via ulrichsigns.com)

Skybar owner Mark Croce provided a timeline of the events that occurred in his downtown club during the early nightfall stages of Sunday morning. He and several employees noticed the Blackhawks forward on the top story of the downtown club with a young woman. He went on to say that the woman appeared to be very attached to Kane throughout a majority of the night. Patrick and three of his friends took advantage of the late weekend closing time and left the Franklin Street bar at 3 in the morning with the woman and her friend (observed by Croce). Kane lives approximately 20 minutes from Downtown Buffalo in his large lake house located on Lakeshore Road in the town of Hamburg. Buffalo News sources have claimed a woman in her late twenties to have been invited for a private party at the lake house. Upon arrival Kane allegedly followed the victim into a room where he preceded to rape her. The alleged sexual attacked occurred at 4 a.m. less than an hour after returning home from Downtown. Buffalo News law enforcement sources said the woman used a cellphone to call a relative that came and picked her up from Kane’s property. The victim was later delivered to a hospital where a rape kit was performed. The results and lab testing can take up to two months of thorough examining before being released to the public.

Other quotes and notes that play into this ongoing investigation:

My outside advice to the victim: Call that family member at an earlier point and time.

My outside advice to the accused: Have a grasp on your personal image. At 26 years old you should always account for family members, loved ones, your girlfriend, and those that can be influenced by fame. Develop a better off-ice relationship with Chicago teammates in order to mature into a more focused athlete.

This advice goes without saying that we do not know the actions that occurred during the cab ride or at other stages of the night. A majority of the facts that maintain a framework for this story have a status of alleged and are not all proven. Could it have been prearranged that she would be dropped off at her place of residency before Kane and his crew made way to Hamburg? Was the victim not in a sound state of mind during a moment that required stern and direct conversation? Quite possibly. This is a pressing matter, further news will impact the lives of those tied into this story.