Intro to The Hard Foul 32

In recent weeks I’ve called the Bills quarterback situation putrid, crappy, craptastic, a pupu platter  and myriad other names that would disappoint my mother. To summarize: it’s bad guys. I don’t think a single Bills fan would disagree. But is it the worst in the league? That’s a question more up for debate. When sifting through the bottom of the QB barrel there are definitely a lot of bad QBs out there. We placed the Bills last because A) Even though Matt Cassel is a “veteran”, he hasn’t performed well or done any real winning since 2010, B) EJ Manuel, while he’s only had 14 career starts, the vast majority of his games have been very bad with him only topping out at mediocre in the others, and C) Tyrod Taylor is a complete unknown but the track record for QBs taken in the 6th round (except for that Brady fellow) is pretty bad. As of right now Matt Cassel is the presumptive favorite to start Week 1 so let’s dig a little deeper.

The conversation around Cassel focuses on two seasons, 2008 and 2010. The only reason anyone outside of football junkies knows who Matt Cassel is because of the 2008 season, when he was thrown to the wolves having to step in for Tom Brady who was injured on the first play of the year. Cassel was completely unproven, hadn’t started a game in any of his 4 years as a pro or his 4 years at USC either, but he performed admirably. He had what would turn out to be his career highs in both passer rating, 63.4, and yards per attempt at 7.2. In 2010, his second year as full time starter in Kansas City, Cassel made a pro bowl and had 27 TDs to only 7 interceptions while leading his team to the playoffs. Any proponent of Cassel as a viable NFL starter will use these two seasons as proof that he can be effective in the league. Hell I know I have. But all it takes is picking up a stat sheet to see that those two seasons are more anomalies than proof of anything.

Matt Cassel hasn’t started more than 9 games in a season since 2010. Matt Cassel has cracked a 60% completion percentage only two times in his career, in 2008 and in 2013 when he started 6 games for an injured Christian Ponder. Matt Cassel has thrown for better than 7 yards per attempt only twice in a season, also 2008 and 2013. Since 2010 his average quarterback rating in a season is an incredibly average 72.7. Cassel has lost starting jobs to legendary QBs such as Brady Quinn and Christian Ponder in recent years. Even when you go back to his two relatively great seasons, his success can be easily explained away. In the ’10 season Cassel was supported by the top running game in the league, which not only helps an offense move the chains but softens any passing defense when a coordinator is focused on stopping the run. And even with that going in his favor he couldn’t complete more than 60% of his passes. In ’08 Cassel played objectively well, but when you put it into the context of being the quarterback of an offense with a stellar offensive line and throwing to peak Randy Moss and Wes Welker, it’s a pretty special circumstance. Never mind these two seasons were 7 and 5 years ago respectively.

Even Cassel’s big intangible he offers, his experience, isn’t what it seems. He’s started 71 games in his career, less than 4 and half seasons worth of starts. So to summarize, Matt Cassel is a career backup that has been bad to mediocre for the past 5 years that has only slightly more experience starting football games than Andy Dalton. Perhaps Cassel working with a very talented Bills skill group can be made serviceable. But at 33 years old, Cassel is on the downside of his career with little chance for improvement. What you see is what you get. And what you see is very mediocre.

On the outset of Bills training camp, I had hoped that EJ Manuel had improved enough to make himself the clear cut starter. I wanted it to happen. I wanted the 1st round pick to not be a waste. After getting pulled after week 4 last year the hope was that he would take that time and better prepare in the offseason and come back more fired up and motivated than ever. Maybe he did better prepare, maybe he was fired up. Early reports from Bills training camp say that doesn’t matter. Much like his career, EJ has been up and down in training camp, with the downs being atrocious and the ups not being very high. I’ve always felt bad for Manuel. He was never talented enough to live up to being a 1st round quarterback, and whether he ever had a chance at succeed in the league, the burden placed on him by his draft spot was too much. Maybe he makes this team as a backup, but it wouldn’t shock me to see him cut before the start of the season. 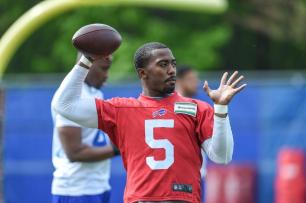 That leaves Tyrod Taylor as the wild card in this QB situation. He has the benefit of having the least  playing time under his belt, throwing only 27 passes in 4 seasons  on the Ravens. That lack of experience works in his advantage with Bills coaches and fans hoping that he’s going to figure it out going into his 5th season. From what I’ve seen of him it appears that he has a strong arm that isn’t very accurate and he’s very athletic but has no pocket presence. Now I understand that he’s not had much opportunity for playing time, but he’s been getting coaching right? He’s been practicing right? I’m not going to hold my breath that a 6th round draft pick is somehow going to figure it out in year 5. But if he does, Tyrod is the only opportunity for the Bills to get above average QB play this season. It might be worth risking letting Taylor find his way at the position if the return is a young, athletic, playmaking quarterback.

The first impression Geno Smith made as an NFL player was not a good one. Geno had expected to be drafted in the first round of the 2013 draft, having been ranked by most analysts as the top quarterback in his class. Some reports had Geno believing that he would be drafted 1st overall. He was not. In fact he was not drafted at all in the first round, and his entire nightmare of a day was caught on camera as he sat in the NFL Draft Green Room as the lone propect undrafted. He threw a tantrum after being embarrassed on ESPN, fired his agent and said he wasn’t going back to the draft for the second round before finally being convinced that he should return. When Smith was finally drafted at pick 39 to the Jets, he put on a determined face and said the whole situation would motivate him. And if you look at his career so far I think it has in both positive and negative ways.

While Geno was a bit of a gun slinger on his way to setting records in college at West Virginia, typically you’ll see young QBs temper themselves entering the league to prevent turnovers. Geno did nothing of the sort, and I think the draft day incident has alot to do with it. Geno is always going for it, always leaving nothing on the table and it reflects in his play. He forces the ball into coverage ALOT, which is something the best QBs do quite a bit; they trust their playmakers, arm strength and accuracy to throw receivers open. Unfortunately for Geno he’s not the most accurate QB out there; through 29 career starts Smith has a completion percentage of 57.5,  ranking near the bottom of the league in that time span. The these two factors combine to make Geno a boom or bust type of quarterback. When he’s feeling it Smith performs well; he has 12 starts with a QB rating of over 80. But when he’s off he’s very bad; see 9 starts with a rating under 60, including the stink bomb of all stink bombs, a 2 for 8 performance where he threw for 5 yards and 3 interceptions last year against Buffalo. Geno is not as bad in totality as you would think, with more than a third of his games being good to very good. However the bad games are SO bad that it distracts you from any perceived positives you can take from the good ones.

Turnovers have plagued Smith throughout his career (New York Post)

Geno’s defining quality as a quarterback is that you can’t define him. He’s so erratic that any it’s hard to have any confidence in him from week to week. He’s what’s known as a high variance player; the highs can be promising, the lows are spectacularly low. But if you take a step back, a player with as much variance as Geno entering his third season offers more promise than someone who’s been middling and is more of a defined product. At least when a player is aggressive there’s a chance he can learn to mitigate mistakes and can become a consistent playmaker at quarterback. Now Geno did finish last year strong, playing what might have been the best game of his career in week 17 against Miami. 20/25, 358 yards passing for a gaudy 14.3 yards per attempt, 3 TD and no picks is nothing to sneeze at. Jets fans have to hope that’s the kind of game Geno can build on; pushing the down the field with accuracy.

Of course that hope took a bit of hit when news broke that Geno would be out 6-10 weeks after getting his jaw broken by a teammate in an altercation about money Geno owed. While a strange incident, it does say a bit about how his Jets teammates regard him and how he conducts himself. Quarterbacks have to be the leader of a team, no matter how much experience they have or even how good they are. Because so much of the burden of if a team will succeed or not flows through him, the rest of the team has to respect him or at least believe in him. After initial reports that Geno had been sucker punched, Jets star Darrelle Revis did not try to protect Geno, being quoted as saying “It takes two to tango.” You don’t want to read too much into an individual incident, but I find it hard to imagine players like Russell Wilson, Aaron Rodgers or Peyton Manning finding themselves in situations like this or more importantly, their teammates not being incredibly pissed that someone hit their starting quarterback.

For the on the field component of this incident, this takes Geno off the field at a crucial time in his career. The Jets need to put the Geno Smith experiment to rest no matter what the outcome. They need answers. Now based on the timeline I’d expect Smith to miss anywhere from 2 to 6 games, while Ryan Fitzpatrick fills in. With Fitz what you see is what you get, he’s a smart player (did you know he went to Harvard?) that plays hard, but he has a pop gun arm that forces him into some bad mistakes. The perception is that Fitz’s consistency makes him the better QB for the Jets than Geno’s erratic nature. Personally I think Geno needs to play, he’s the only QB capable of the kind of play that can get the Jets to the playoffs this season. Him becoming more consistent is only wishful thinking however, and from what we’ve seen so far it’s hard to imagine either one of these gentlemen leading a team to a Super Bowl in 2015.