Is Robin Lehner the Sabres Goaltender of the Future?

Robin Lehner has a lot to live up to this upcoming hockey season. This amount of pressure can make or break a young goaltender. Lehner has been given the opportunity to prove himself as a starting caliber goalie during an anticipated Buffalo Sabres season. Now that all pieces appear to be in place fans expect nothing less than constant improvement. It’s clear that Tim Murray took a leap of faith in order to bring in the 24 year old goaltender from Ottawa’s saturated goaltending pool. The trade took place on June 26, when the Senators moved Lehner and forward David Legwand to the Sabres for the No. 21 pick in the 2015 NHL Draft. This spurred a lot of inside scrutiny, Buffalo fans took notice of the other goalies moved at a cheaper price. Rangers’ goaltender Cam Talbot went to the Edmonton Oilers for the amount of 57th, 79th and a 184th pick. The point moves back to trusting in Tim Murray. He served as a former assistant to the GM beneath his uncle Bryan Murray during his days in Ottawa. Tim Murray gravitated towards his former position making use of scouting reports and time well spent analyzing this goaltender. The Sabres general manger showed no remorse, “He’s a talented, big, strong young man who is just scratching the surface. Hopefully, we can bring the best out of him.” 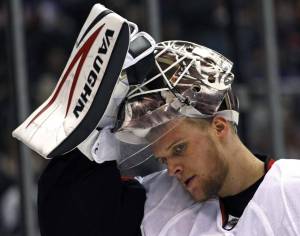 Lehner is approaching the second year of the three-year contract signed with Ottawa on July 31, 2013. He is guaranteed 2.25M for each of the next two seasons that will likely be spent with the Buffalo Sabres. His contract situation bodes very well for Buffalo, allowing him to prove himself. If he plays anywhere similar to his record setting performance against St Louis on February 4th the Sabres will have made a very successful trade. He faced over 50 shots in an action filled game and emerged victorious in a 5-4 shootout win. Lehner is a large butterfly style goaltender at a height of 6’ 3’’ and a weight of 225 lbs. When he slides into his deflection stance he takes up a very large portion of the net. He does very well against the initial shot, he is patient and strikes using quick instincts. There is a popular video on YouTube that displays another facet of his game. A pile up in front of the net leads to a battle between himself and the opposing Syracuse Crunch goaltender Riku Helenius. This is everything fans want out of a goaltender. Lehner has that Buffalo grit despite hailing from Gothenburg, Sweden and understands the pivoting point he has reached in his career. Lehner’s stance between the pipes will prevent guys like current LA King and former Bruin winger Milan Lucic from attempting any questionable hits near his crease.

“My rule has been, if I see the other goalie goes out to the corner, my team is a man down,” said Lehner. “That’s what happened in my fight in the AHL too. I was into it and Helenius came down because it was 6-against-5. It wasn’t even numbers. Then you go. (Photo Credit: Ottawa Sun)

Moving onto the warning signs, Lehner spent 30 games sitting out with a concussion during the previous season. His aggressive attitude has triggered ejections from a few minor league hockey games. He plays on the highs and lows of hockey games, and his inability to keep calm can lead him to do  some hotheaded things. Lehner’s injury absence led to the rise of the Hamburglar, free agent goalie Andrew Hammond who went on an insane winning streak to get Ottawa into the playoffs last season.  Concussions are no joke in the sport of ice hockey, players can move at a speed of 18 miles per hour. The rush to the goal crease can be of the most dangerous spot located on the ice. The fact that Robin has a past riddled with concussions indicates his next occurrence could bench him for even more than 30 games.

The only side of Lehner’s game that is visibly lacking is his control of the rebound. A majority of his highlights are initial deflections. This first shot is typically accepted into an awaiting glove or deflected out of harm’s way towards a corner. This is an area that a majority of goaltenders struggle with, it’s an aspect of the position that separates the elite from the great. Robin’s father played an important role in coaching his son and elite goaltender Henrik Lundqvist. Michael Lehner has a vast background in martial arts. He converted stances and attacks into goaltending angles and defensive slides. This fact bodes well for the fans that hope Robin can rise to the status of an NHL caliber starting goaltender.