UB and Justin Moss: Does the Punishment Match the Crime? 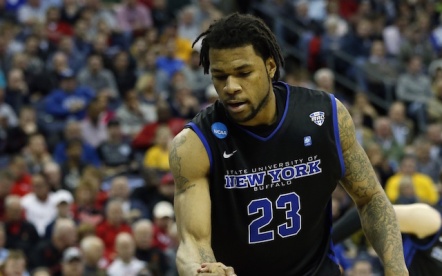 Justin Moss will no longer be attending the University at Buffalo (CBSSports.com)

Justin Moss, reigning MAC player of the year, and star forward for the University at Buffalo basketball team was dismissed from the university today. This is a sentence I thought I would never have to write.

I am not here in minimalize the act of theft, nor am I here to act as a faux-moralist and defend the university. Most importantly, I am certainly not here to talk about basketball. Justin Moss is one of best people I have had the pleasure of spending time with in my time at UB. He is one of the people I would least suspect to be expelled from school. He is a good student, with only two classes standing between him and graduation. Though some will now argue this point, Justin was a great ambassador for the University. He remained humble through all the success, and kept a level head despite all the awards and honors that came his way.  It’s easy to look at this story at face value and point the finger at Moss, which may be justified. Theft is not a good thing, and Justin will tell you that himself.

With all of the horrible news stories that come out, day after day, of athletes being let off the hook for domestic violence, assault, DUI’s and skating free with minimal punishment, it appears the exact opposite is happening in this situation. Sure, Moss was on probation for a very minor incident previously. Keep in mind that this is the same university that withholds privileges for an unpaid $10 parking ticket. The punishment does not fit the crime. The university that I attend, am involved in, and support lost a lot of my respect this afternoon.

Again, this is not about basketball, as there are much bigger issues at hand here. Let’s not try and fool ourselves here; the University at Buffalo came down harshly on Justin Moss because he is an athlete. It has been obvious to me that the school does not value its athletic department as much as it should. So when the opportunity arose, they decided to take a shot at a prominent figure to set an example. Dismissing Justin from the basketball team is a completely, entirely, separate situation compared to expelling a senior with 6 credits needed to graduated. It would be understandable, even justified, to remove Moss from the basketball team. He made two mistakes, and those mistakes cannot go unrecognized. But to remove a person from the school for a minor theft is an embarrassing way for the university to try to make an example out of someone.

One response to “UB and Justin Moss: Does the Punishment Match the Crime?”