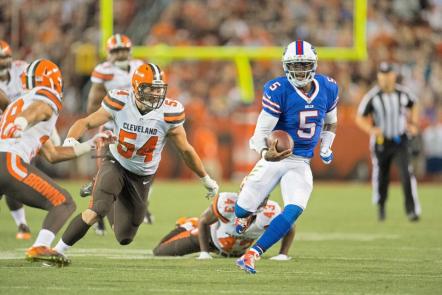 Tyrod Taylor has come a long way to reach this point. (BuffaloBills.com)

When Rex Ryan acquired Tyrod Taylor from the Baltimore Ravens this off season, most Bills fans had no idea what to think. You may have seen his highlights at Virginia Tech but after 4 years sitting behind Joe Flacco in Baltimore, it had been a long time since Tyrod had made an impact on the field. So, for most, Tyrod was just a 6th round pick that hadn’t played in a long time.

Bills fans have now discovered he is so much more than that. The newly minted Bills starter has shown flashes of being a very capable quarterback. But this didn’t come out of nowhere. In 2011, ESPN produced a series of documentaries about Cam Newton, Jake Locker and Tyrod Taylor going through the draft process called Three For the Show. Below are each of Tyrod’s segments edited together courtesy of Vimeo user VTPhreak. Watch him go through the ups and downs of the draft process, and learn how he became the player who will be starting on opening day for the Buffalo Bills. (Video after the jump.)