I couldn’t help but have a smile on my face as the “Sabre Dance” played on WGR Sport Radio on Monday evening. The Sabres were finally back in action on a fresh sheet of ice at the Excel Energy Center in St. Paul, Minnesota. The Sabres trumped the Wild by a score of 3 – 2 despite the several prominent forwards missing from Buffalo’s lineup. Fans listening via radio or receiving updates must have been displeased by the fact that this preseason game went untelevised.

It’s a rare realization, preseason is now interesting this year, there are so many new things to analyze about this team. The theme of the preseason opener was music to any Buffalo fan’s ears. 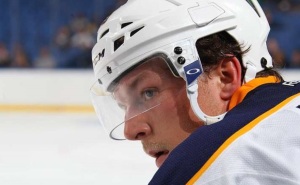 The Buffalo Sabres have a very strong showing in a thrilling preseason opener at the Excel Energy Center in Minnesota (Photo Credit: Bill Wippert)

The coming out party for Jack Eichel raged on! The young forward arguably scored two goals in the later stages of the third period. Eichel’s first point of the game was on a redirected shot that hit the body of Matt Moulson and found the back of the twine. The two preseason assistant captains displayed the chemistry that had been developed inside of the Moulson residence. Eichel’s second goal gave the Sabres their first lead of the night, he deked once and flicked a shot through the legs of Darcy Kuemper. This is the type of progress (preseason or not) confirms the special skill-set he brings to this young roster.

.@BuffaloSabres @jack_eichel11 shows off the silky mitts with this smooth backhander. http://t.co/zRGassweio

The second most interesting line pairing featured Buffalo’s 51st overall selection in the 2015 NHL Entry Draft: Brendan Guhle. The young prospect was paired with Mark Pysyk, a player that trudged through an underserving year with the Rochester Americans. The 18 year old Guhle showed a lot of confidence playing against the frontloaded Minnesota Wild roster. Minnesota coaches aimed to please fans by awarding heavy minutes to stars like Parise, Koivu, and Pominville. Guhle had no fear during the offensive attack in the 3 on 3 overtime that followed regulation. He threw multiple shots at the net and certainly had fun with the new addition to the NHL game format.

When regulation time expired the Sabre’s bench zoomed to congratulate goaltender Nathan Lieuwen but were quickly waved away. The Wild had the awkward final say of the night when Zach Parise scored in the mandated 3 on 3 overtime.

Lieuwen relieved starter Chad Johnson early in the third period and closed the game out. Johnson took care of removing the question mark hanging above his forehead saving 15 of the 17 Minnesota shots. The vacancy at the backup goaltender spot is an area to keep an eye on as this preseason wages on. A reminder that Lehner has faced his share of concussions, the back-up spot will be a critical decision for Bylsma.

The Sabres managed to come away victorious due to the squad’s determination in the early stages of the game. Nicolas Deslauriers snapped home a pass from Marcus Foligno which quickly answered Jared Spurgeon’s opening game goal. This achievement is one that matters most to a player likely uncertain about his role in the upcoming season. It’s evident that Bylsma is pushing this team to its maximum capacity. Eichel commented before the game that this was the fourth consecutive day of work for both himself and his teammates. If this team can continue to put their noses to the grindstone they will be one of the more prepared teams coming out of camp.

The Sabres take on the Ottawa Senators from the First Niagara Center this Wednesday, September 23rd with a 7 p.m. puck drop. 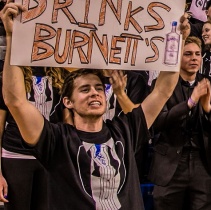