Week 2, where the survival pools thin out, and fantasy owners panic. The Bills are 1-1 after a very anticlimactic game versus the Patriots. All the hype and excitement for the game faded away right around 1:30 Eastern Time. The Bills came out strong and then went into complete self destruction mode. I have some thoughts on that and other things that happened around the NFL this week.

3 Things That Stood Out About the Bills: 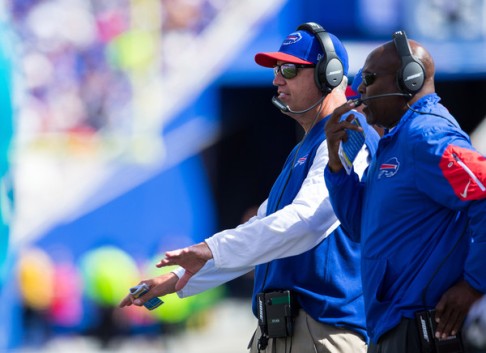 All the talking that the Bills did blew up in their face. The defense came out flat and had no answers for Tom Brady’s 466 yards 3 touchdowns and 105.6 passer rating. They should focus more on their assignments and I think that comes from the coaching.

2.) Tyrod Has to Be Better in the Pocket

Getting sacked 8 times is absolutely unacceptable in the NFL. The Patriots defense was viewed as weak in the week leading up to the game and they came to rock. Tyrod averaged 3.03 seconds to throw everytime he dropped back. That was the longest in the NFL. After back to back weeks of seeing great QBs it’s easy to say that holding on to the ball too long causes many problems for the offense such as 8 sacks and 3 INTs. Hopefully this week the coaches work on cleaning up his awareness up as well as his confidence. 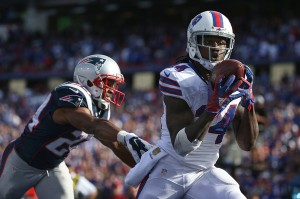 On the positive side of things, they still managed to make the game a fight at the end. Whether it was the Patriots letting up (they threw on 4th down late in the fourth, so I don’t think they let up) or it was the Bills just feeling comfortable with facing defeat and playing pressure free, they were able to get the offense moving for the first time since the opening drive. The defense picked it up by finally breaking free and getting to Brady causing a strip-sack fumble recovery which put the offense in good field position. By the time the 2 minute warning came around the Bills were looking like they had a good chance to make some noise. And in Buffalo, if you’re not going to win at least make it exciting.

Around The NFL: 3 Things That Stood Out:

They played 2 important conference games in the first 2 weeks and came out flat. This week they did it in a special way.   The Cowboys who had already lost Dez Bryant a week earlier, had their QB Tony Romo suffer a broken collarbone this week. So now a Chip Kelly team is playing vs a divisional team without its top 2 players, and Dallas somehow wins?? Chip Kelly is on the hot seat this year and he’s doing himself zero favors. The fans in Philly get weary easily so I suggest he treads lightly. It probably won’t help that Demarco left practice this week with a hamstring issue and Kiko Alonso has another major knee injury. But hey LeSean McCoy is looking healthy in Buffalo!!

This week Johnny Manziel started for the Cleveland Browns. Outcome? Cleveland beat the Tennessee Titans 28-14. Manziel passed for 172 yards and 2 touchdowns. How does the prestigious Cleveland Browns organization reward him? By starting Josh McCown this week. No not the guy from the Verizon commercials. Mike Pettine is looking to become a statistic in Cleveland with these kind of moves. Biggest loser in all of this? Travis Benjamin, who had 6 catches for 204 yards and 3 Touchdowns with Manziel as QB. Sorry Browns fans I know your pain.

3.) The Jaguars are Blooming a Little Early

Blake Bortles looks like he’s coming into his own early as a QB. It’s only 2 weeks in I know, but he looked very professional versus a very good defense this week vs Miami. His favorite target?  Allen Robinson, who has been targeted 19 times for 7 catches, 182 yards and 2 touchdowns. This team has potential, and just wait until Julius Thomas comes back. Look for this team to step up in what is seemingly a weak AFC South.

Darby had a good outing against the best quarterback to ever play the game. He had 2 pass break-ups to raise his total to 4 on the year and he still sits on 1 interception on the year.

Last week he was on an offensive line that didn’t allow a sack. This week 8 is the amount of sacks they allowed past them and even though they are not completely responsible for all of them PFF has John Miller responsible for 2.5 sacks which is a lot. He is a rookie so he does have a ceiling but he has a lot of room for improvement.

Another touchdown this week for Karlos. He is definitely blowing me away in his first 2 games as a Bill. His season totals are now 76 yards on only 12 carries and leads the team with 2 rushing touchdowns. He also looked very good in run blocking, he is leading this rookie class in a very positive way.

Richie Incognito graded out as the best player for the Bills again on Sunday according to PFF. Which is really surprising because he hasn’t played in over a year.

Their penalties skyrocketed up to 14 more this week for 140 yards. Season total currently sits at 25 for 253 yards!!! They have to clean that up, that’s unacceptable.

With Tyrod you need to have an understanding of what is going on. His “fantasy stats” aren’t bad but his in-depth stats aren’t pretty. On 3rd down on Sunday Tyrod was 2-5, 8 yards, 2 INTs, and 4 sacks. That’s not what you would like to have coming from your starting QB. His total QBR was 32.6; an average score would be 50. He held onto the ball too long, a league high 3.03 seconds per pass. From my diagnosis from All-22 Tyrod is having a difficult time throwing from the pocket. It might be due to him being 6’1 which is considered small for a NFL QB. His touchdowns this past Sunday were all from roll outs, the Watkins touchdown was with a huge drop back which put him right on the edge of the pocket.

It’s also affecting him when he throws to the middle of the field. As you see on 2 of his INTs that since he is pressured and uncomfortable in the pocket, Taylor throws the ball too high which lead to turnovers. Tyrod’s season stats are:   437 yards, 4 TDs  3 Ints, 75.5 completion %. He is also 0-1* as a Bills starting QB.

The Bills have another divisional game this week against the Miami Dolphins. The Dolphins will be a tough test for the Bills, don’t get fooled by their loss to Jacksonville, Miami is definitely a Wild Card threat. This is the first time Richie Incognito goes back to the team that cut him as fallout from BullyGate. I wouldn’t say that this week is a must win for the Bills but if they want to show the league that they are better than what they showed last week they better come out swinging. I think LeSean McCoy has a great week and I think a little Miami heat might be all he needs to feel good again.

This entry was posted in NFL, zackelsharif and tagged bills, buffalo, nfl, zackelsharif. Bookmark the permalink.