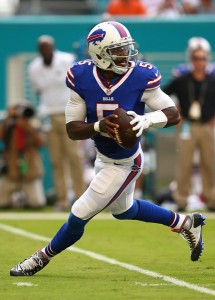 Tyrod Taylor had a masterful performance on Sunday (Getty Images)

The home opener for the Miami Dolphins in their 50th anniversary season could not have gone worse, getting completely dominated in all facets of the game. It was an extremely encouraging sign seeing the Bills bounce back as emphatically as they did on both sides of the ball. The biggest question mark coming into the week was how the Bills would respond after the thrashing doled out by the Patriots in week 2. Thankfully, any fears of a potential hangover were put to rest Sunday in South Florida. Here are 3 takeaways from Sunday’s game:

Taylor bounced back from a shaky outing against New England where he was often times indecisive and inaccurate with his throws. Tyrod started the game out on fire leading two well executed touchdown drives to set a tone early. Beyond hitting his passes at a 75% clip for 277 yards and 3 touchdowns, it’s the way Taylor rebounded from last week that was particularly impressive. The Patriots forced Taylor to beat them with his arm by taking away all the short throws and dump-offs which resulted in the offense going stagnant for the majority of the game. But on Sunday, Taylor showed opposing defensive coordinators that this game plan will not always be successful. Taylor hit on multiple throws down the field, showing teams that he can beat them as a runner and more importantly with his arm. Once again, it’s good to see that Tyrod’s first instinct isn’t to scramble when he leaves the pocket but rather to keep his eyes downfield and make a throw. The most successful example of this was the 38 yard touchdown to Chris Hogan in the 4th quarter. 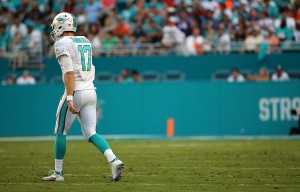 Hughes lived up to his big contract in a big way on Sunday as he was living in the backfield all day. This one won’t show up on the box score but Hughes was the best player on both sides of the ball, playing a massive part in creating turnovers and pressuring Ryan Tannehill. The Dolphins swiss-cheese offensive line will be having nightmares of the Bills defensive line, but Jerry Hughes may have done enough on Sunday to force Dolphins offensive coordinator Bill Lazor to check into a psych ward. Hughes has been the best lineman on the Bills so far this season, and further extended that lead on Sunday. Pro Football Focus, a site I respect very much, is notorious for giving Jerry Hughes negative grades despite being disruptive every game. On Sunday, they gave Hughes a +5.1, highest on the Bills, so he must have been pretty damn good. 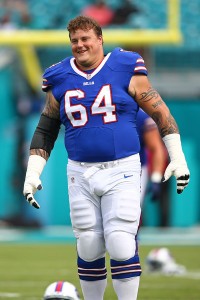 I have been as critical as anyone about the Bills offensive line, largely because I think it’s the only thing that can hold the offense back. Against the Dolphins the offensive line held up beautifully against the pass rush for the most part. The line did not allow a sack, and left Tyrod seemingly infinite time in the pocket to throw. Richie Incognito continued his hot start to the season against his former team, performing well in just about every aspect he could. It’s always difficult to grade out offensive lineman, but Incognito looks fantastic both run blocking and pass blocking. The most notorious play from the former Dolphin was on Karlos Williams 40 yard TD, when he pulled from his LG position and flattened Jelani Jenkins. Strictly opinion: Cordy Glenn should be moved to guard next year. He hasn’t been a liability, but he struggles mightily with speed rushers like Chandler Jones and Oliver Vernon and that has been evident the last few games. That’s just me being nit-picky, however. Tough to complain about the offensive line at all after Sunday.

The Bills will welcome the New York Giants to Orchard Park next Sunday as 6 point favorites. The Giants arguably should be 3-0 sans a few mind blowing clock management decisions, so they cannot be taken lightly. With that being said, Buffalo is a substantially better team than the Giants they’ll be hosting and needs to take care of business at home. Eli Manning is notoriously hot and cold, Odell Beckham is a special talent that will more likely than not draw coverage from Stephon Gilmore, and Victor Cruz will be making his season debut after returning from knee surgery. The Giants offense is certainly capable of putting points on the board, depending on which Eli Manning shows up but the Bills have a clear advantage on this front. Defensively, there is nothing particularly unique about what the Giants do. They have two formidable corners in Prince Amukamara and Dominque Rodgers-Cromartie, though the later of the two is in question for Sunday’s matchup. With LeSean McCoy more likely than not sitting out, Karlos Williams will have to bear the load, which he is certainly capable of doing.