Mike Pettine is being let down by his staff (AP Photo).

When you’re an NFL head coach with no prior experience other than being a coordinator for a few years, the most important thing you can do is hire an experienced, reliable staff.

You need a really good staff to guide you through problems in the locker room, on the practice field, and when it comes to scheme. You can’t be all things to all people and you can’t be in every position room at once. At the end of the day, your 53-man roster isn’t going to ultimately respond to your coaching. They’re responding to your staff’s coaching.

Mike Pettine’s staff is letting him down big-time. It started when OL coach Andy Moeller lost his job because of an alleged drunken domestic violence incident. It continued when Jim O’Neil took on far more responsibility on the defensive side of the ball, and made that side look like a “scout team” — in Pettine’s own words — against a team like the Oakland Raiders. It’s highlighted by John DeFillippo changing the running scheme (even though he publicly claims it’s the same) and struggling mightily in his first ever season calling plays in the NFL.

Moreover, and even more concerning, is that Pettine and the coordinators don’t even seem to be on the same page. Take Thursday’s press conferences in Berea:

Pettine had this to say about SS Donte Whitner: “Donte Whitner is a competitive guy and he’d be the first to tell you he needs to play more consistently.”

His defensive coordinator, Jim O’Neil, followed up with this: “Donte Whitner isn’t getting old fast. We’re going to roll with Donte, guys. He’s one of our best players.”

O’Neil had a particularly rough press conference from his land of total denial. He thinks the Browns’ defense can “still be a cornerstone of this team,” and he says that less than five days after the Browns gave up 300+ passing yards to a 2nd-year QB, 100+ receiving yards to a rookie WR, and more than 150 yards on the ground. He said these things after Mike Pettine publicly scolded his players for failing to put their “words into actions,” as they talked big and played cheap. 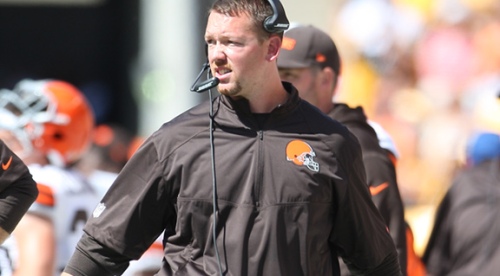 No, Jim O’Neil, it’s not OK to cover NFL wide receivers with backup linebackers in the redzone. (Getty Images)

O’Neil also thinks the Browns are being hurt by “1 or 2 big plays.” He says the defense is being consistent for “28 or 29 plays” but being hurt by “1 or 2 plays.” Which totally makes sense if you flat-out ignore the fact that Oakland had five – FIVE! — drives of more than 75 yards against his “cornerstone” defense.

He also says “the foundation of our scheme is the foundation of our scheme. It’s been very successful against the run and the pass.” Well, I hate to break this news to O’Neil, but since he and Pettine have been away from Rex Ryan, his defenses have been 28th and 32nd against the run. That doesn’t count this year, where they’ll leading the polls for 32nd again. I wouldn’t call that “very successful,” but that’s just me.

Then, there’s the offensive side of the ball. I don’t need to drone on and on about this, I’ll just let Dustin Fox’s tweet speak for itself. When you can’t beat the Oakland Raiders 11-on-10 from the 1-yard-line, you’re not very good. When you’re 11-on-10 and make ZERO adjustments to spread an already thin defense, instead opting to stick with your called run up the middle, you’re even worse.

#Browns got stopped here. 3rd & Goal from the 1. Raiders had 10 guys on the field. pic.twitter.com/VfoFfogzHa

The Browns are fluctuating between power run blocking and the zone scheme that was really successful last year. They’re using each on a game-by-game basis, totally ignoring the fact that the Browns are incapable of power blocking. They can’t do it. They’re also, you know, pretty good in the zone scheme. But hey, play away from your strengths, right?

For all the flack that Kyle Shanahan took for leaving at the end of last season, he was probably the single-most important reason the Browns were at one point 7-4 last year. They were not winning on talent. They were winning purely on scheme. It made everybody look good – the offense, the front office staff, and the head coach. Now, he’s gone. The head coach looks like belongs back in Eastern Pennsylvania high school football, and his coordinators are the reason for it.

Mike Pettine told his players to quit talking big until they can back it up. He should relay that message to his staff, as well.

This entry was posted in adambennett, Cleveland. Bookmark the permalink.