A New Way to Attack: The Inverted Winger

New soccer writer Stefan Hanley will be writing about all parts of The Beautiful Game from team and player profiles to on field play and tactics. Here’s his first piece for Hard Foul Sports on how the game is changing tactically. 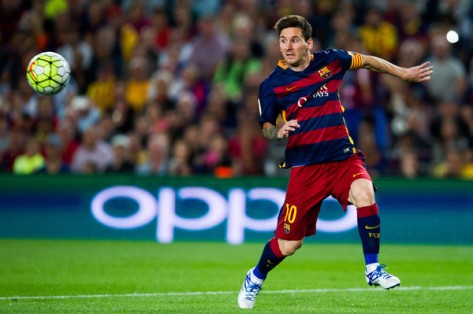 Soccer has changed more in the last decade than in the four that preceded it. With growing importance placed on athleticism, and the lucrative rewards that come with European qualification, the stakes have never been higher for players, coaches, owners, and of course, fans.

Gone are the days of throwing your best eleven out there and trying to score one more than the opponent. Match film, massive scouting networks, and superior tactical awareness have all contributed to a game that’s far more cerebral than it used to be. That’s a tough pill to swallow for a lot of ex-players and pundits, particularly in England, some of whom just cannot seem to accept that their coaching methods and philosophies are outdated, and in every sense, outstripped by the Continental method (which the US is beginning to implement at a grass roots level). Of course, the reaction from these dinosaurs is not to adapt, but to automatically revert to the “everyone else must be wrong” ideology.

Specific changes in the game can be isolated, analyzed, and discussed (the false 9, the two CDM set), but enthusiasts must realize how they all interact with each other to create a complete set of tactics. Changes aren’t arbitrary – they are a reaction to stimuli brought on by opposition tactics. They work, they become vogue, they are adapted across the board, and the game goes through another revolution.

One such tactic is the ‘Inverted Winger’ scheme. In case you’re new to the game, here’s a brief explanation of what that means – traditionally, a winger lingers out by the touchline, stretching the width of the field and creating space for teammates by occupying the full back. In days gone by, a speedy, not always technically gifted winger would glide past said full back, get to the byline, and put in a quality cross for a striker to head the ball past a helpless keeper. Sounds pretty simple right? But here’s that interaction point making an appearance – this tactic relies on the winger being twice the athlete of the defender. That’s no longer the case.

Before the early 2000s, the primary role of the full back was to defend crosses, stay back on attacking set pieces, and barely advance beyond the halfway line going forward. Players like Cafu and Roberto Carlos were revered because they were the exception, not the rule. Physically, most full backs were smaller, and often the least athletic players on the field. Now, they are powerhouses at the top level, able to get back and forward for 90 minutes, tackle, jump, cross, and pass. They’ve become a hybrid of defenders and wingers. Strong, quick, and technical. Think Dani Alves, Marcelo, Alaba, Ivanovic, Coleman et al. That’s the new full back. They spend just as much time in the opponent’s final third as their own. 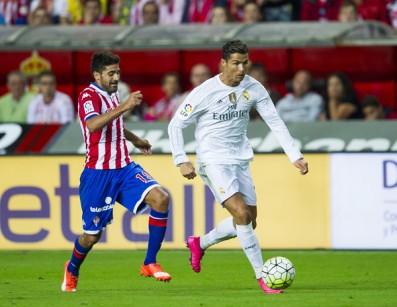 But what does that mean for the traditional winger? To put it simply, it means they are dying out. The way they play is just surplus to requirements for most teams in the top leagues. Back to the main topic – inverted wingers. Rather than get the ball, beat a defender, and put in a cross (which is all in all a low percentage look), they are positioned on the wing counter intuitive to their footedness (left footers on right wing, right on left). Need an example? Arjen Robben, Lionel Messi, and Cristiano Ronaldo. Ring any bells? Before they were moved to a more central position, Messi and Ronaldo played the textbook role of an inverted winger; receiving the ball out wide, cutting inside across the 18 yard box, and shooting or passing to a better placed teammate. Unstoppable for the longest time. Now, the evolution of the 4-2-3-1 formation (below) allows teams to deploy two deep lying midfielders to clog the central space. It doesn’t always work, but it’s better than giving Lionel Messi a free run at your two lumbering center backs. 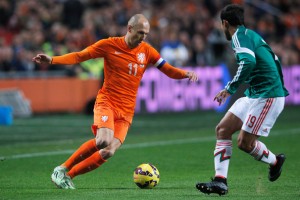 Having athletic, attacking full backs almost forces the use of inverted wingers, and we’ll outline that below with some graphics. But first, let’s imagine the scenario without the adjustment. Take two traditional wingers, and add two attacking fullbacks on their team. Now add another element to the game forced by the emergence of attacking fullbacks; wingers who track back instead of hanging out at the other end of the field.

That means there are 4 players (a winger and fullback on one team defending a winger and fullback on the other) occupying a tiny space of the field. It’s pretty difficult to do anything with the ball when things are so tight. That said, there are still traditional, lazy wingers, and that frees up space, but most coaches just won’t stand for a player leaving his full back out to dry like that, and more often than not, an attacking fullback will be defended by a winger who comes back to help out. Let’s take a look at that exact scenario. 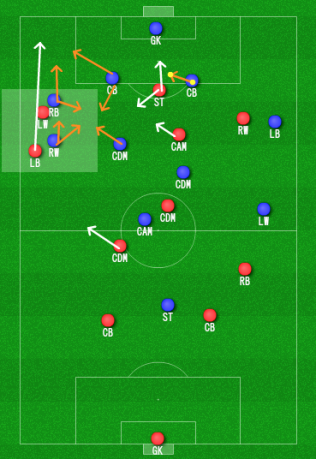 The left winger (LW) has received the ball out wide. His attack minded full back is on his horse, ready to bomb past him, get the ball, and put in a cross. But, look how many players are now in and around that square of space. There are no angles to play with. Whatever happens, there’s a legion of defenders closing in. If the winger tries to go himself, the RB goes with him, with the RW as security incase he tries to cut inside or cut back to his own LB, AND the CB and CDM can slide over to cut him off if he squirms through. If he somehow beats the RB, the CB can cut over to the byline to cover a cross, with the recovering RB as his insurance. If the attacking LW hands off to his LB, the same scenarios play out. They are simply too close together, and they’ve left it too late to carve out space to operate in.

Now let’s look at what happens with inverted wingers who like to cut inside instead of hit the byline. 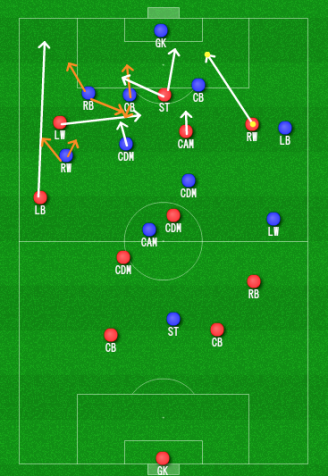 If he starts moving inward early, he acts as a black hole for defenders. There are so many possible actions he can take, and each one brings it’s own adjustments from the defense. As he cuts in, the RW and RB will both gravitate towards him. It’s only natural. But, they’ll hedge their bets, because the LB is bombing on outside. Either they get too tight and he can release his full back to turn the corner on the RB/put in a cross to three attacking players arriving late, or they hedge too far and he’s broken that first line of defense. Next, the CB and CDM will try to close the pincers on him. Again, margins are fine. If the center back comes too tight, the LW can slip in the advancing CAM, or play a neat little through ball to the ST, either for a shot or to cut it back, again to the advancing CDM. If the far CB tries to adjust to prevent either outcome, a little dink across or through to his RW, and it’s another shot on goal. With a semi-competent passer, good things are going to happen, and let’s face it, these inverted wingers are usually handy in possession. Here’s an outline of the options he has when he cuts in on his strong foot. He can shoot, or pick out one of three passes to his teammates, depending on how the defenders react. It’s a recipe for goals. 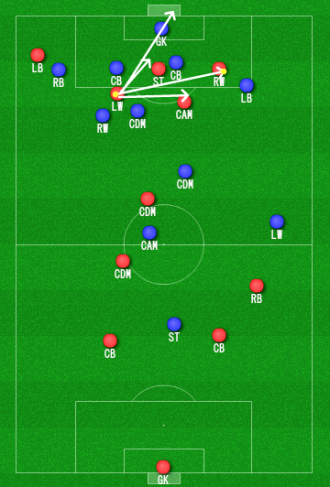 Look at this graphic, and see how the winger cutting inside slices up that tight little cluster of players from the traditional winger graphic and gives you two separate ones to play with. For the attacking fullback, it’s most likely going to end up a one-on-one, instead of a 2 vs 4 battle royale, and while the LW is still surrounded with players, he’s far less isolated, supported by three attack minded players not more than ten yards away and with positional advantage on the defenders. 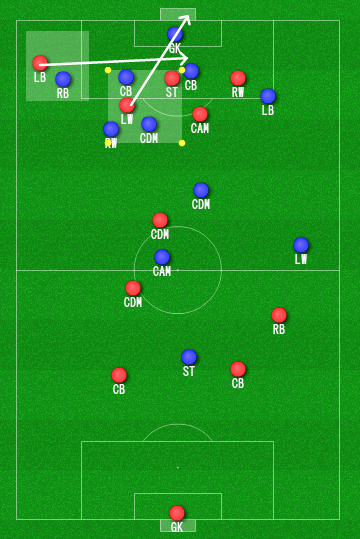 Of course, some formations are set up differently, and some teams will set up with an extremely narrow midfield with the goal of choking superior midfielders inside and letting their full backs counter attack freely. Others will run with a totally defensive mindset, forbidding their full backs to advance at all. However, the rise of the inverted winger shows how many teams in Europe’s top leagues deploy the tactic, and until attacking geniuses are shackled by a defence that can adapt rapidly, it looks like it’s here to stay.