Whew. Somehow, someway, the Buffalo Bills managed to find their way out of Nashville with a victory. Things started off slowly for the Bills once again, but on the heels of some brilliant plays by Tyrod Taylor and some exceptionally strong second half defense, the Bills squeaked out a 14-13 win.

In two consecutive weeks the Bills have struggled to get their feet underneath them during the first half of the game. Tyrod Taylor struggled mightily against the Titans for the first half of the game, accumulating only 51 total yards of offense.  Halfway through the third quarter Taylor had only 52 yards, and the Bills offense appeared to be dead in the water. Eventually, Tyrod would flip a switch (we’ll get there later) and turn the game around. The Bills didn’t get much production from any skill position players to help Tyrod out in the first half, and barely got any in the second half either. Despite the fact that Buffalo pulled a win out of thin air, there’s still a lot of work that needs to be done to improve the Bills offense, especially in the first half of games. There isn’t much of a running game to speak of now, which could be at the root of the problem. The assumed return of Watkins next week should help alleviate some pressure across the entire offense, and hopefully Karlos Williams will be ready to go next week, as well.

There stood the Bills, halfway through the third quarter, entirely lifeless.  Taylor proceeded to take it upon himself to change the game, and boy did he ever do so. All of a sudden, it felt like watching a 2010 Virginia Tech game where Tyrod used his speed and athleticism to take over the game. Finishing the game with 76 yards rushing and a touchdown is only part of the story for Taylor’s afternoon. He took the game over when the Bills needed it most, and that is something the Bills haven’t had in two decades. It was not an electric day in the box score for Taylor’s stats through the air, in the slightest, but he made a tremendous throw to Chris Hogan down the sideline that would eventually set up the go ahead score. While it is worrisome that Taylor has started poorly in two consecutive weeks, I believe it is more valuable to look at the outcome of today’s game as an indicator. Being able to take over and close out a game (with the help of the defense) is immensely valuable, especially on a team that figures to be playing a lot of close games.

3) Gilmore and the Defense: 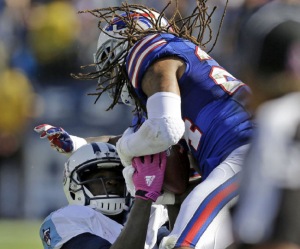 Flashback two years ago and Stephon Gilmore was public enemy number one in Buffalo. Gilmore was, ludicrously, coined as the scapegoat for just about everything wrong with the defense on any particular day. Mercifully, the naysayers and WGR 550 callers have been silenced. Stephon Gilmore has stepped his game up even further this year, and is playing at an exceptionally high level. Recording the game-clinching interception of Marcus Mariota was the cap on a day where Gilmore was the best player on the field. The defense as a whole looked tremendous overall, also. Mario Williams provided pass rush on the edge all day, while Marcell Dareus provided in on the interior. Ronald Darby, once again, continued his bid towards Defensive Rookie of the Year. In a first half where the game could have spiraled out of control, the Bills defense put their nose to the grindstone and allowed only 170 yards and 10 points, despite being on the field for majority of the half. The domination continued into the second half, securing the Bills victory. Tyrod Taylor might get the game ball, but he should at least take the defense out to dinner.

The 5-0 Cincinnati Bengals come to Orchard Park next Sunday, in what should be a heavy hitting matchup. These aren’t your fathers Bungles, and even YOUR Bungles. This Cincinnati team finally looks to be the contender we’ve thought they’d be for a few years. Andy Dalton has started the season more red-hot than his hair, and the offense is clicking on all cylinders. The defense has proven to be susceptible to big plays, which hopefully plays into the Bills hands with the hopeful return of Watkins and Williams to the offense. On offense, the Bills have their work cut out for them trying to contain a lot of viable weapons that Andy Dalton has at his disposal. AJ Green is a proven commodity, of course, however beyond Green comes a reliable second and third receiver in Marvin Jones and Mohammed Sanu. Tight end Tyler Eifert has finally stayed healthy, and is showing what the Bengals saw when they selected him in the first round. A two-headed-monster at running back features Jeremy Hill and Gio Bernard. Matchup wise, it’s not going to be easy for the Bills to completely contain the offense, especially if the coaching staff implements a quicker passing game, which is the only way to beat the Bills. Pass rush will be key, as usual, to disrupting Dalton and the big play potential that he presents. The Bills cannot afford to come out flat in this one, or the Bengals will make them pay more than the Titans and Giants have.

This entry was posted in mattharing, NFL and tagged bills, mattharing, nfl. Bookmark the permalink.