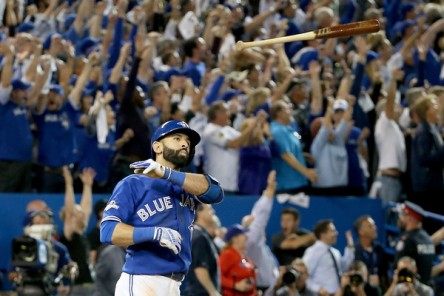 The Toronto Blue Jays have not won a playoff home game since 1993. That all changed tonight. The people of Toronto witnessed history tonight as their Jays came back from a 3-2 hole and overcame one of the craziest plays anyone has seen. The Rangers got Cole Hamels for a game like this, and he came through until his defense let him down.

In the top of the 7th inning, with Shin-Soo Choo up to bat and and Rougned Odor on third base, Russell Martin was set to throw the ball back to relief pitcher Aaron Sanchez when the ball hit Choo’s hand and rolled down the third base line. Thanks to Odor’s heads up base running, the up and coming second basemen scored on the play. Home plate umpire Dale Scott raised his arms as to call a dead ball. Rangers manager Jeff Bannister came out and had a discussion with Scott who then awarded Odor home. That led to John Gibbons coming out and putting the game under protest.

Who gets the RBI? #rangers #bluejays #alds https://t.co/pqI4zsNlcD

What happened next should never ever happen at a sporting event. Blue Jays fans began throwing beer cans onto the field. Fans up in the 500 level began throwing their cans and were hitting fans sitting beneath them. Act like you have been there before….oh wait, they haven’t in a very long time.

In the bottom of the 7th inning after the Rangers made 3 errors which led to the exit of Hamels, Jose Bautista stepped up to bat and provided us fans with the best pimp job in quite some time. Bautista’s home run gave the Jays a 6-3 lead and they never looked back. 20 year old Roberto Osuna picked up the five out save, striking out four Rangers and pumping 97 consistently.

The greatest bat flip in the history of earth. @JoeyBats19 https://t.co/EkdMynWIZ6 #ComeTogether

Did anyone see Drake at the game?

This entry was posted in brianwolf, MLB and tagged brianwolf, mlb. Bookmark the permalink.