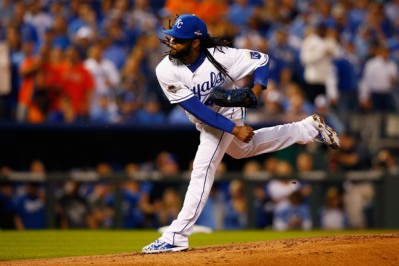 How will Johnny Cueto and the Royals pitching staff handle the Blue Jays firepower? (Getty Images)

With the decisive and  dramatic division series decided, the stage is set for an international battle in the ALCS. The Blue Birds from north of the border will come across the threshold between our countries to meet the Royals in Missouri to start what is sure to be one hell of a matchup. The Blue Jays brawn and bat flips will matchup with Ned Yost and his affinity for small ball. This matchup, despite the Royals World Series appearance last year, is one of the freshest and most exciting in years. Both of these teams have gone through an extended drought without a championship, therefore providing a hunger from each fan base. Of course this has been a postseason filled with teams that have long been absent from the postseason, so going forward other plotlines will emerge and take precedence.

Starting with the Jays, one pivotal question may be whether the offense can dominate and dismantle the Royals pitching staff. Save for an 8 run outpouring in game 4 and the sloppiest defensive inning I remember, the Jays offense has yet to show how great it can be. Of course 5 games is a small sample size, but the postseason is essentially a series of small sample sizes. The Jays will need to find the stroke that has seemingly eluded them to this point. Looking past the offense, another key cog for Toronto is David Price. Price was knocked around after starting game 1 of the ALDS, and was also hit hard in a wasted relief appearance in game 4. Price will have to come in the series and set the tone on the mound. The Blue Jays traded for what they thought was a bona fide ace, and Price will have to prove that he is one of the Jays want to get off to a hot start in this series.

Looking at the Royals, for me their question marks start with the man calling the shots rather than the teams itself. Ned Yost has often been depicted as a poor manager, and that is most certainly the case. His use of the bullpen and use of Alcides Escobar in the leadoff spot are just a couple of examples of how he has mismanaged his team. So for me one of the questions becomes whether or not Yost will be willing to adjust his managerial style and philosophy if he finds his back against a wall. Also, will he make changes in the lineup (swapping Alex Gordon and Escobar in the lineup perhaps) that will inevitably make the lineup stronger? Another question mark for this team is whether or not they will be able to keep up with the Jays high octane offense. Although they didn’t show it a ton in the division series, the Blue Jays offense is capable of putting up runs in bunches. The Royals aren’t quite built the same way, and they rely on small ball in order to put runs on the board. There is quite a disparity in power between the teams as the Jays hit nearly 100 home runs more than the Royals, and slugged nearly 50 points higher. If they aren’t able to hold the Jays in check, the Royals may find it difficult to manufacture enough runs to come back in a game.

Essentially I think this series will end up coming down to the team with the better offense. The Jays have an elite offense with a manager that does less to hurt his team’s chances. I think the Royals roster is balanced enough to make this an interesting series, and this series can absolutely go either way. In the end however, I think the Jays take care of business in 6 games and make it back to the World Series for the first time since Joe Carter’s walk off blast in ‘93.