Despite the efforts of two teams with a wealth of postseason experience, talent and youth prevailed in the National League Division Series’. Two teams that have been known by their fan bases as ‘lovable losers’ prepare to faceoff as the Amazin Mets get set to take on the team from the North Side of Chicago: the Cubs. Back in April it seemed in unfathomable that these two teams would meet in the NLCS, but to say each team hasn’t changed since then would be vastly incorrect. The Mets added to their pitching depth, calling up some of their young arms and also added some much needed offense in the form of Yoenis Cespedes. The Cubbies have grown as a team, going from a roster of young raw talent, to a balanced roster that has shown they are ready for the limelight. Their pitching staff has been anchored by John Lester and the late blooming vet Jake Arrieta. With each team coming into their own in the second half of the season, their early season matchups in which the Cubs went 7-0 are worthless in terms of any value in predicting what might happen. 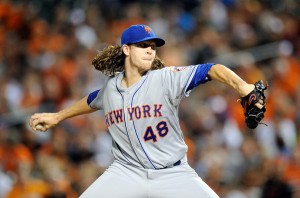 The Mets have maybe been the most surprising team this year, not only making the postseason but also dethroning a team in the Nationals that many thought would compete for a World Series. The most obvious reason for that is the incredible wealth of young pitching that the Mets have displayed over the past couple of seasons. Even with Zack Wheeler out, the Mets at times had 4 dominant young pitchers in their rotation, with the oldest being Matt Harvey. The Mets finished the season 7th in pitching WAR, and if not for injuries and early season bullpen issues they probably would have finished higher. The question mark for this team is whether or not they can get consistent contributions from their offense. The Mets were able to score enough to get past the Dodgers, although that isn’t saying much because the Dodgers have been an offensively challenged team for much of the second half. Now the Mets have to try and outscore a team that can put up runs in bunches, and happens to have a pretty solid pitching staff themselves. Daniel Murphy’s power surge is an anomaly, and the rest of the offense has to step up and produce.

For the Cubs, this season has been an affirmation to the job done by the front office of Theo Epstein and Jed Hoyer. After coming to Chicago, both of these men were looking to do exactly what they did in Boston: rebuild a team and bring a championship to a city that has been “cursed.” This season has shown that rebuild is over, and now all that remains is that World Series title that just a couple of seasons ago seemed like an impossibility to Cubs fans. This team is very good, and don’t let their third place finish fool you. Even though they finished behind the Cardinals and Pirates, there was a general feeling that the Cardinals had outperformed themselves, and that the Cubs may have actually been the best team in the division when it was all said and done. And that seems to be the case, after the Cubs beat the Pirates in the Wild Card game and dispatched of the Cards in the Division Series. The Cubs pitching has been incredible this season, as they ranked 1st on fangraphs.com in pitching WAR. A lot of that has to do with Arrieta, but it also has a lot to do with the solid contributions they have gotten from the entire staff. The Cubs also ranked 4th in WAR for position players, which speaks to the incredible balance Joe Maddon has gotten from his team. If there is a weakness for this team, it is definitely the middle relief and setup roles from their bullpen. This postseason the Cubs have been getting high leverage outs from the likes of Trevor Cahill (who was released by the Braves, 30th in total WAR for pitchers) and Fernando Rodney. Although they both seemed to be revitalized when joining the Cubs, it’s hard to imagine that they are completely different pitchers than they were just a couple of months ago.

Overall, neither of these teams has any glaring issues that might put them behind the 8 ball. Both teams have great pitching staffs, and although the Mets might not be as good offensively, they certainly have enough to push across some runs for their dominant staff. For me, this series may almost be a toss up. In a series that is this evenly matched, it’s a safe bet to go with the manager that is less likely to make mistakes to hurt his team. In this case that man is clearly Joe Maddon, as he may be the best manager in baseball, and Terry Collins has had a history of making questionable decisions. In the end I think the Cubbies will clinch their first pennant in 70+ years, and they will do it in 7 games. From there I suppose anything is possible, even if you’re a beaten down Cubs fan.