In a sport that is known for its randomness and unpredictability, it is sometimes hard to say that baseball surprises us. That’s not to say that some outcomes don’t seem random, but it’s just that there’s a tendency to brush those outcomes off to the nature of the sport. Randomness like Joe Mauer’s 28 home runs in 2009, or the dominance of Oliver Perez in 2004 when he accumulated 4.6 WAR for the Pirates. Baseball is random, and most of the time, that doesn’t surprise. However, this season has been exceptionally random, especially considering the pool of postseason teams. And as we come to the proverbial crescendo, the unpredictability of baseball has been particularly highlighted with our final two.

The Royals, although representing the AL in the series for the second straight year, seemed to be pegged as an underdog from the start. Many experts and fans alike assumed the Tigers would dominate the AL Central. Even after the season-long dominance by the Royals, many picked them to lose to the upstart Astros in the ALDS. And, once in the ALCS, many picked the Royals to be out-slugged by the Blue Jays. Yet, here we are, with the Royals once again four simple outs away from their first World Series since 1985. Maybe this group is better than people think. They have won despite deficiencies by their de facto ace Johnny Cueto, and in spite of the lack of respect they have gotten throughout the season. The Royals have simply been extremely consistent for the entire season.

For the Royals, there are a few keys to success that will allow them to continue to prove the critics wrong and bring a World Series championship to a Missouri city not named St. Louis. The first key is whether Cueto can match up with the Mets’ assortment of young aces. No matter where he starts for KC, Cueto is still the key for this pitching staff. Looking at the stats this starting staff has posted in a SSS, it’s somewhat incredible to think that they have made it this far. Cueto epitomizes that sentiment, as he currently is sitting battered and bruised with a postseason ERA north of 7.50. Aside from Cueto, the Royals need to get a lot more out of a starting staff that hasn’t found much consistency thus far in the postseason. Another key for me is one I harped on in the ALCS: the management style of Ned Yost. This time, however, I am here to praise him (somewhat). Yost proved in the ALCS, even if he was late at times, that he was in fact willing to use his best relievers in situations where he normally wouldn’t have them slotted in. That isn’t to say he hasn’t made mistakes (I still hate the way he sets up his lineup), however he seems to be a little more apt to a different approach this go around. Also, Yost hasn’t been as bunt-happy as he has been in the past, with his team only having two successful sacrifices to this point in the postseason (I don’t have the data on failed attempts). In a National League environment, this may change, but Yost has done a better job of allowing his hitters to hit, rather than giving away a free out.

For the Mets, the keys are pretty straightforward. Terry Collins needs to do his best to make sure his young pitchers aren’t exposed. There were a couple games to this point in the postseason, where Collins left a pitcher that was struggling in the game rather than pulling him and going with a fresh arm. Although the games in which he did this never really came back to haunt him, leaving a pitcher in a game in which he is struggling is a dangerous gamble, especially for a young pitcher who may be more likely to lose confidence with a lopsided inning. Maybe Terry knows his staff well enough to know when they are just shaky rather than flat out laboring. But when you get down to the World Series, sometimes it’s better to not take chances. Moving past Collins, the other key for the Mets is Daniel Murphy. Murphy has gone from the default second baseman for the Mets to etching his name in Met and MLB postseason lore. Murphy has been incredible, and who knows if it might continue into the World Series. However, the rational and analytical mind that I have tells me that it is much more probable than not that Murphy doesn’t continue this incredible run he’s been on. So from there, the Mets need to find some extra production behind him, and the two key hitters in the lineup for me are David Wright and Lucas Duda. The Mets have had a pretty good formula thus far, with Curtis Granderson getting on and either Murphy or Cespedes getting him in. At some point the Mets are going to need production from either Duda or Wright. Duda looked to be turning things around with a breakout performance in Game 4 of the NLCS. Wright hasn’t been too much of a factor to this point, and he would certainly be a welcomed cog if he can contribute in the Fall Classic. 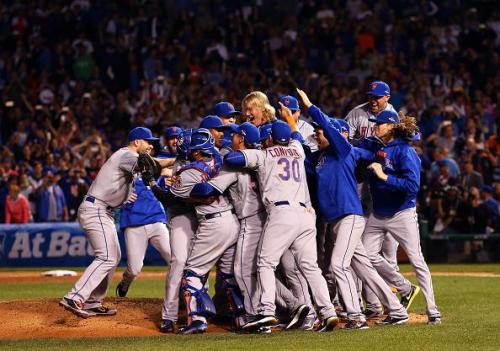 I suppose that making a pick is pointless, especially considering how off base I was with my picks in the Championship Series’. However, my inner egotist believes I may in some way have an idea of what might happen, so I suppose a pick couldn’t hurt. After picking against both these teams in the previous round, I feel a little weary about my pick. The Royals are the return AL Champs that are looking to take a championship that they probably believe should be their second straight. I love the depth of the Royals lineup, which includes one of my personal favorite players in Ben Zobrist. This lineup produces a lot of contact, and actually led the league in batting average against pitches 95+ MPH with a .284 mark. Still, I believe in my heart of hearts that the old adage remains true, and pitching does in fact win championships. In that case, the obvious pick is the New York Metropolitans, and I believe they will win in five games. My pick for World Series MVP is Matt Harvey, who will pitch brilliantly in both games one and five in route to the Mets’ championship.

This entry was posted in cruzserrano, MLB. Bookmark the permalink.