Josh McCown winces in pain during the Browns’ 34-20 loss to the Cardinals in Cleveland on Sunday. (NEOMG Photo)

CLEVELAND — So there the Browns were, after forcing another Arizona turnover, up 20-7 with the ball and 1:20 on the clock in the 2nd quarter. They were deep in their own territory, but they’d also moved the ball up and down the field at will in the first half.

The 2-5 Browns had a chance to score again and put even more pressure on the Cardinals heading into halftime. Plus, the Browns got the ball to start the 3rd quarter. The offense was clicking, Josh McCown was in rhythm, and there was a real chance to take a three-possession lead into the locker room.

What did head coach Mike Pettine elect to do? Play not to lose, of course.

Taking a page out of the Pat Shurmur Game Management Handbook, Pettine elected to run the ball three times, forcing the Cardinals to burn their timeouts. The Browns went 3-and-out, the Cardinals got the ball back, they marched into Browns territory, kicked a field goal, and all of the sudden what could have been a 21-point lead evaporated into a 10-point advantage at the half. 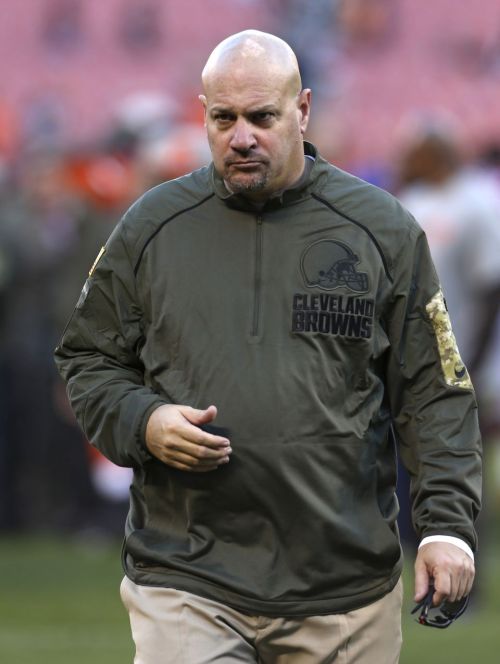 Mike Pettine walks off the field after losing the 10th of his last 12 games as Browns coach. (AP Photo)

You know the rest of the story.

The Browns went 3-and-out to start the second half, the Cardinals took over and immediately scored a touchdown, and the game was really over at that point.

When you’re 2-5, what exactly do you have to lose? Well, not really anything, but Pettine continues to coach like a man scared of it. The game was lost when he sat on the ball at the end of the half. It sucked all of the momentum out of the stadium, and gift-wrapped it straight to the Cardinals. It was a clear signal to his players – especially on offense – that no matter how well they’d played, Pettine didn’t trust them to do it again. He’d rather take the safe route, even sacrificing more points, than trust in his guys.

Now you know why the Browns are 2-6. The offense didn’t score from that point forward. Coincidence? Nah. Not at all.

The Browns are at a dangerous point, not only in the season, but in Jimmy Haslam’s ownership. Media members and fans alike are calling for the team to “blow things up” once again. In reality, that’s about the last thing that any fan who’s been loyal to this franchise wants to hear. Cleveland has “blown it up” time-in and time-out, only to yield the same disappointing results over and over again.

That said, anyone with a football pulse understands that Ray Farmer isn’t the long-term answer at general manager. The Browns have more cap space than just about any team in the league, Farmer has had two offseasons to fill the roster with capable talent, and yet Cleveland has one of the most undermanned rosters in the NFL. He tried to get way too cute, both in the draft and free agency, and it bombed. Big time. $9 million guaranteed to Dwayne Bowe? That was smart. Justin Gilbert, Johnny Manziel, Danny Shelton and Cam Erving with your four first round picks in the last two years? Good luck selling that one when you’re trying to get another job.

The same knowledgeable fans also understand that Pettine has failed to change the culture. This is a team that’s been playing not to lose for years. Quite frankly, it doesn’t matter that “we’re close,” in Pettine’s words. We were close in Shurmur’s two years here. We were even closer in Eric Mangini’s final season, when we beat New Orleans and New England in successive games and took a significant step forward. We were close in 2007, when Romeo Crennel went 10-6 and was fired just a year later. We’ve led the league in “being close” since 1999.

There are those who argue that Pettine has done all he can with a roster devoid of talent. I’d agree with that, to an extent. But I’d also ask the following question: What area of the Browns has improved from the time that he came here to now? If we’re being honest, the defense has significantly worsened, our offensive line has played poorly, we’re not generating any kind of a pass rush, and our run offense is the worst in the league. We’re passing the ball better. But that’s about it.

Why is this a critical juncture in Haslam’s ownership? The majority of the fan base is already tired and fed up with both Farmer and Pettine. In fact, in our twitter poll conducted last night and voted on by more than 500 fans, nearly 9-in-10 want Farmer fired, and more than 7-and-10 concede that Pettine isn’t the answer as our head coach.

Do you think the Browns should fire Ray Farmer?

Do you think Mike Pettine is the right coach for the Browns long-term?

What’s worse is the Browns have a team president that has dramatically raised ticket prices, only to make loyal, deserving fans watch one of the most boring products in the NFL. Several people contend that this is one of the worst periods ever for Browns fans, including local media member Bruce Drennan, who contends that in his 30+ years in Cleveland, this is “by far the worst time to be a Cleveland Browns fan.”

The league’s most loyal and passionate fan base deserves better. And if the team has to “blow it up” again to give them that, so be it.