So I threw this question out on twitter this morning: Has anyone who played for Mike Pettine last year and is still playing for the Browns this year made an improvement from year one to year two?

The obvious answer is yes, there’s some player that’s improved somewhere. Travis Benjamin and Gary Barnidge are two examples of that. But if we dive deep into the roster, and look at every player who was in Cleveland last year and still playing for the Browns this year, which ones improved and which ones have regressed? Well, let’s find out:

Johnny Manziel: Manziel is the only QB still on the roster from last year’s team. He’s seen limited game action this year, but he is 1-0 as a starter, beating Tennessee in the Browns’ home opener. That said, Pettine steadfastly refuses to play him, even though playoffs are out of reach and the organization needs to find out what they have in the 2nd year QB.
The Verdict: Who Knows? You can’t say he’s regressed, and you also can’t say he’s improved, since he’s sitting on the bench and Pettine would rather play Josh McCown on a stretcher than Manziel.

Johnny Manziel can’t get out of the shadows (NEOMG Photo)

Isaiah Crowell: Last year, Crowell averaged 4.1 yards per carry and scored eight touchdowns. Through the halfway point this season, Crowell’s YPC is down to 3.2, and he’s only scored once.
The Verdict: Regressed 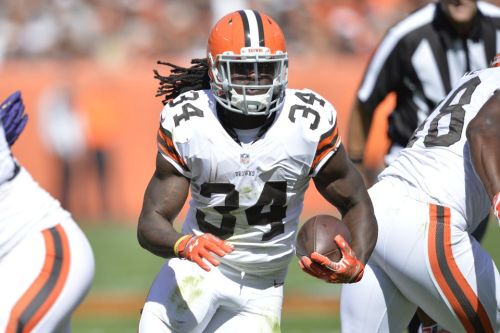 Isaiah Crowell had a great rookie season. He’s following it up with a bad second year. (AP)

Travis Benjamin: Benjamin is one of two players Pettine can say has significantly improved during his tenure. Last year, Benjamin was plagued with significant issues in the return game, and didn’t make a huge impact as a receiver. This season, he’s become a real deep-threat at the position, he’s Josh McCown’s No. 1 target, and he’s been stellar in the return game.
The Verdict: Improved 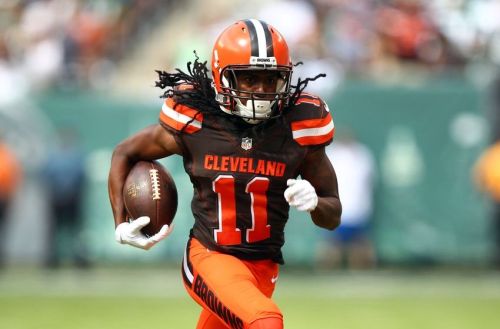 Travis Benjamin is having a great year for the Browns (AP)

Andrew Hawkins: Hawkins had 63 catches for more than 800 yards last year. This year, he’s been pretty invisible, catching just 20 balls for 200 yards at the halfway point.
The Verdict: Regressed

Taylor Gabriel: In his rookie season last year, Gabriel had 36 catches for 621 yards and a TD. This year, he’s on pace for more catches (23 through eight games), but far less yardage (194 through eight games). He has yet to catch a TD pass.
The Verdict: The Same

Gary Barnidge: This is a no-brainer. He’s improved arguably more than anyone else. The coaching staff (and mainly Barnidge) certainly deserves credit for his production.
The Verdict: Improved

Gary Barnidge has emerged as one of the top TEs in the NFL, to everyone’s surprise (AP)

Jim Dray: Statistically, he had more production last year, but we’ll be nice and say he’s about the same player.
The Verdict: The Same

We’ll do this as a group. According to PFF, the Browns had the 6th best offensive line in the NFL last year. They updated their rankings through five weeks of this season, and they actually IMPROVED to third.

That said, the Browns are on pace to give up more sacks this season than last, and they’re now the worst rushing offense in the league through eight games this year (when they were one of the best through eight games last year). The worst part is that they’ve been healthy.

Mack and Bitonio have certainly regressed. Thomas is playing well, minus the occasional false start or holding penalty. Schwartz has improved, while Greco has remained the same. As a group, though, they’re not getting the job done.

The Browns’ offensive line has taken a step back (Bleacher Report)

John Hughes: He’s on pace for more tackles and already has 1.5 sacks when he didn’t record one last year, so we’ll say he’s improved.
The Verdict: Improved

Jamie Meder: He’s improved, mostly because he’s been thrust into a larger role after the release of Phil Taylor.
The Verdict: Improved

Paul Kruger: I don’t need stats to tell you he’s significantly regressed. The coaching staff is telling you that themselves by playing him way less and using him in a different role than a pass rusher.
The Verdict: Regressed

Armonty Bryant: Bryant is Pettine’s success story on defense. He’s been great this year, with 22 tackles, 3.5 sacks and two forced fumbles at the halfway point. The coaching staff deserves praise for his improvement.
The Verdict: Improved

Karlos Dansby: Dansby is on pace to meet his stat production from last year if he would have played in all 16 games last year instead of just 12. The only difference being is he has more INTs and scored a defensive TD this season. So we’ll say he’s improved. A little.
The Verdict: Improved

Christian Kirksey: His stats are basically the same as his rookie season, which in-and-of itself is a concern when a player isn’t making an improvement from his rookie year to his second season.
The Verdict: The Same

Craig Robertson: Craig Robertson is a contender for one of the players who’ve regressed the most on the defensive side of the ball. He’s been really poor this year, and he wasn’t really very good last year.
The Verdict: Regressed

Barkevious Mingo: I don’t really need to write anything about this one, right?
The Verdict: Regressed

Scott Solomon: He’s been hurt, so who knows.
The Verdict: The Same

Joe Haden: He went from an all-pro to an oft-injured 4th string caliber CB. Speaks for itself.
The Verdict: Regressed 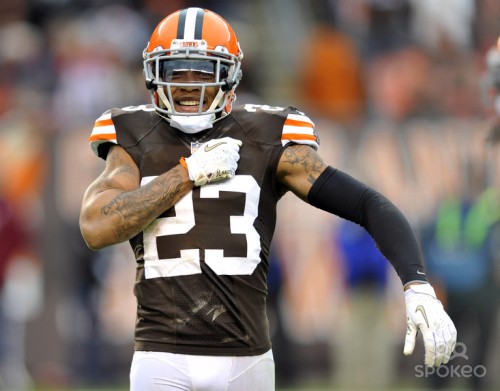 Joe Haden is having his worst season as a Brown (AP)

K’Waun Williams: One of the few bright spots in the secondary. K’Waun (minus the recurring concussions) is very quietly having a nice season.
The Verdict: Improved

Justin Gilbert: Two things: 1.) Gilbert actually played last year, and he played a great game against Indy. 2.) Gilbert is not playing this year.
The Verdict: Regressed

Johnson Bademosi: Johnson struggles at corner or safety. He’s good on special teams. That was the case last year, and it’s still the case this year.
The Verdict: The Same

Pierre Desir: Desir has improved. He’s the only one in the secondary who can say that. Again, most of his improvement is because he’s been thrust into a bigger role.
The Verdict: Improved

Tashaun Gipson: His production has declined from last season, although you could say that last season is about as good as it gets for anyone at his position.
The Verdict: Regressed

Jordan Poyer: He’s improved, but mostly because he’s been thrust into a bigger role.
The Verdict: Improved

Minus the offensive line, who we counted as a group, there are 27 returning players from last year’s team receiving their second season of coaching from Pettine. Of those 27:

More players have regressed – whether slightly or significantly – under Pettine’s leadership than have improved. Again, that’s not counting the offensive line, which certainly as a group has been worse. Not a good look for a coach trying to make it long-term in this league, and another reason to believe that we should be looking for a new coach at the end of the season.