For The Mets, The Future Is Now

November 1st, 2015. Mark that day down, as the New York Mets were still playing baseball. If I have said it once, I have probably said it 1,000 times – if you were to tell me the Mets would be playing baseball in November I would have laughed at you (probably hysterically). Who knew one trade (Cespedes), and a few young, blossoming stars (Syndergaard, D’Arnoud) would pave the way for a run all the way to the baseball seasons winding days. Terry Collin’s took the blame for Sunday nights 9th inning meltdown, and let’s face it – he was out-managed all series long by Ned Yost, of all people. But Yost pushed the right buttons for his side while New York and Terry Collins’ club just didn’t have the answers for the Royals pressure.

One narrative that blew out of epic proportions was that the season was somehow a failure for New York, which is clearly wrong (I can’t even begin to say this was close to a failure). Losing in five games to the back to back defending American League pennant winners is far from a failure, considering that no one expected them to be there in the first place. Now we look forward for the Mets and first thing is first – there will be no World Series hangover for this group.

Jacob deGrom has what it takes to be the anchor of this Mets pitching staff (Mike Stobe/Getty Images).

Matt Harvey, Jacob deGrom, Noah Syndergaard, Steven Matz and at some point in 2016 Zack Wheeler are all back in the starting rotation for the ’16 Mets. Are you friggin’ kidding me with that rotation? In order to maintain dominance in the National League east it is pretty evident that someone will need to be shipped out. Yoenis Cespedes in my opinion has one foot out the door as although he didn’t hit a home run for the last 16 games down the regular season stretch (and added a less than flattering .222 average in the postseason) – he revolutionized the Mets lineup and thus earned a nice payday come opening day of free agency (November 7th). The obvious choice is Matt Harvey. Harvey and agent Scott Boras turned some heads toward the end of the regular with Harvey bringing up his innings restriction set by Dr. James Andrews (180 innings) and then wouldn’t confirm or deny if he would go above that limit to help the Mets reach the postseason. At the time Queens was in panic mode.  Harvey, deemed the Dark Knight prior to tearing his UCL less than two years ago looked like the next great pitcher to wear the blue and orange.

Harvey is an interesting character – he bleeds raw emotion and wants to compete no matter what. His intense emotion swayed Collins to let him go back out there in the top of the 9th in game 5, even though history and numbers were against Harvey and where he was at in the game (108 pitches heading into the top of the 9th). But it is his demeanor, sometimes selfish that may sway management to looking into dealing Harvey (26) over staff anchor deGrom (27) or young ace of the future Syndergaard (23). The return for Harvey would still be plentiful as I would guess the  Mets would be looking for a middle of the order bat, preferably from the right side, as well as an A level prospect, mixed in with one or two lower end prospects. Starting pitching wins and loses you ball games so the market for Harvey would be plentiful if the Mets elected to shop him. 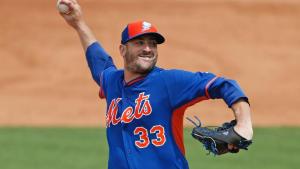 Matt Harvey has been a hot name to be dealt in New York, but should he? He was named NL comeback player of the year earlier this week. (Getty Images)

If the Mets dealt Harvey they are still looking at a core of deGrom, Syndergaard, Matz (24), Zack Wheeler (25), and most likely a returning Jonathan Niese (29). Dare I say they could even bring back ageless Bartolo Colon to fill innings on the backend of the rotation? Expect Daniel Murphy to capitalize on his historic post-season, get handsomely overpaid (and never live up to the money), while  the likes of Kelly Johnson, Juan Uribe, and  the above mentioned Cespedes all chase money somewhere  else. Out with the old and in with the new though as expect Michael Conforto to get an everyday job in the outfield, Gavin Cecchini is close, and Marcus Molina could play a role as early as next spring as well. Don’t forget Eric Campbell either as he has a chance to be a nice impact bat for this club for years to come.

Trade targets for the Mets if they were to deal a top line starter should start on the north side of Chicago. The cubs have a log jam in their middle infield, are said to be in the market for another top end starter, and have the assets to acquire such starter if they were to swing and miss on top end guys such as David Price, Zack Greinke, or Johnny Cueto. Starlin Castro is expected to be open for bidding after losing his starting job to Addison Russell at the end of last season. Javier Baez could also be a candidate if Castro was to be kept put. Throw in a Carl Edwards Jr, and outfielder Billy McKinney and that’s a nice trade all around.

I feel like Carlos Gonzalez is always made available in the baron wasteland of Colorado. Gonzalez in Citi field with a combination of Eddie Butler (SP) and Trevor Story (SS) and the Mets may consider that too.

**Disclaimer** I am not a fan of Harvey being dealt out of New York, but business wise it does make sense because of how many talented, young arms are in New York already. Although David Wright is starting to show his age at 3rd and Curtis Granderson is slowing down a little bit this team has a bright future if they push the right buttons with their trades. This past season it was trades that escalated them to the next level and again this offseason it will be trades that keep them in the hunt to repeat as National League champs and bring a title to Queens for the first time since ’86 (Thanks Buckner).