Time For Divisions To Go 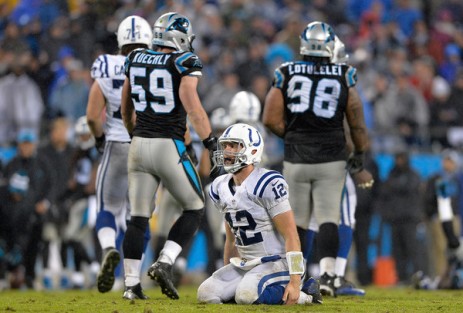 Andrew Luck is very lucky his Colts are in the craptastic AFC South. (Getty Images)

It was about a month ago now that we at Hard Foul Sports were sitting down for our weekly podcast – talking about the MLB playoffs. Not even two minutes into the conversation I semi-lost my sh*t because of how STUPID divisions are in sports. I could probably give you 3,000 words covering my disdain for divisions in sports but let me start with two things for you lovely readers:

I digress. Professional leagues are starting to see the light. The NHL has switched out to having two large divisions on each side, and while the NBA has divisions, they are worth less than an autographed EJ Manuel football because you are ranked where you finish. No automatic top four finish because you won the lousy Atlantic division with a 42-40 record because the Knicks, Nets, Celtics, and 76ers are all on the level of the mid 2000’s Niagara Falls varsity basketball teams.

Here’s my issue with divisions in the NFL though – it completely takes away from deserving teams making the playoffs. Remember 2013? The Arizona Cardinals went 10-6 and missed the playoffs? In fact the NFC West was one of the best divisions in football I have ever seen that year. The Seahawks and 49ers were awesome, (13-3, 12-4 respectively) and the Cardinals rounded it out at 10-6. AND THE DAMN RAMS STILL WENT 7-9 SOMEHOW. Meanwhile, the Packers snuck into the playoffs at a miserable 8-7-1. Props to Matt Flynn for letting them hang around, but an injury to Aaron Rodgers or not – you don’t deserve to get in. Last year the 7-8-1 Panthers got into the playoffs because the NFC South has the quality of the Big East basketball conference. Not the old awesome Big East but the new, crappy Big East…woof. How about the year 2008 anyone? The 11-5, Matt Cassel led, New England Patriots don’t win the division for the first and only time this century (just about) and don’t make the playoffs because San Diego won the AFC West at 8-8. For that matter even the Jets, who finished third in the east at 9-7 belonged in before the Chargers.

The AFC South actually is trying to be worse than the eye gauging NFC South was last year. NO MORE FOOTBALL IN THE SOUTH, PLEASE FOR THE LOVE OF ALL THINGS GOOD FOR MAN. But seriously, are you going to try and tell me the potential 7-9 or dare I say 6-10 Colts getting a home playoff game is best for business? Unfortunately for the league there are only five teams in the AFC with 5 or more wins. Last year at this time? 11 teams in the conference had 5 or more. Either way, give me an exciting Raiders team who might miss out on the playoffs at 8-8 or 9-7 over the Colts. Give me the Bills (!!!) and end the 15 year curse over the city of Buffalo. I am convinced it may never snow again in Buffalo once the Bills finally reach the holy land of playoff football. Hell, Give me the Jets, give me the Chiefs, give me ANYONE who finishes with a respectable record over the lowly AFC South winner.

At the very least it is time for the winner of divisions to no longer be guaranteed a home playoff game. If the Colts somehow manage to pull through and win 8 games, they should be hitting the road to face whoever finishes in 3rd (I predict the Colts will be the worst team record wise to get in). They should have to hit the road and face off with the Broncos at Mile High. Or maybe go take on Dalton and the boys in Cincinnati. In no way should the Steelers, Jets, or Bills have to go on the road to face a team who only got into the horse race because the division they play in was filled with ponies.

Wake up National Football League, it is 2015. Time to make an adjustment.

Thank you from a concerned NFL fan.

This entry was posted in miketolsma, NFL and tagged divisions, football, miketolsma, nfl. Bookmark the permalink.