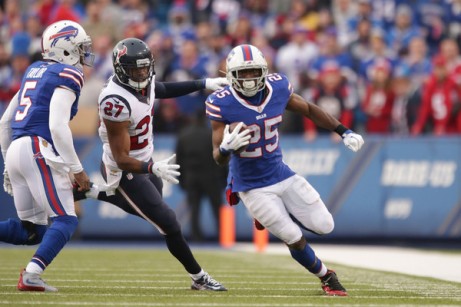 Shady McCoy proved to be dynamic once again vs. Houston (Getty Images)

With their backs against the proverbial wall, the Buffalo Bills stepped up when they needed to most and sealed the deal on a crucial win to keep their playoff hopes alive. The Bills maintained control of the game, failing to relinquish the lead that they had established early. A surge from the Texans in which they tied the game left some worry amongst the fans, but the offense quickly answered the bell as they scored the game winning touchdown. Here are my two biggest takeaways from Sunday’s victory:

The knack of finding the big play has been something lacking in the Bills offense for the better part of two decades. Fortunately, this year’s offense is very well equipped to do so, and have proven this ability frequently throughout the year. The offense is not a portrait of consistency by any means, but they can make up for this with big plays through the air and on the ground. Tyrod Taylor does many things well, but (excluding Monday Night Football) perhaps the thing he does best is throw the deep ball. He hit Sammy Watkins for two beautifully thrown 53 yard passes, and Charles Clay for 40 yards in what turned out to be the game winning touchdown. Lesean McCoy kept his hot streak active this afternoon and continued to provide the big chunks of yardage on the ground that Bills fans have become accustomed to over the second half of the season. Mike Gillislee (!!!!) even got in on the big play action, running for 30 yards on the Bills first drive of the game.

The big play opportunities in the passing game have become more frequent in the more recent weeks, and this can absolutely be attributed to Lesean McCoy’s success running the football. Opposing defenses have to respect McCoy on the ground, and because of this it has allowed Watkins to get open deep rather consistently. Tyrod showing the ability to on the deep throws is a tremendous sign, and it leaves defenses in a precarious situation. Play the run, or play the deep ball to Watkins?

2) Houston, we don’t have a problem 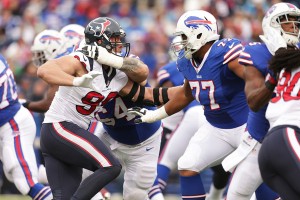 Sorry, I had to. The Bills managed to get through the matchup with the Texans without any significant impact for JJ Watt. This, undoubtedly, is a huge reason that they were able to come out victorious this afternoon. Managing to hold the best defensive player in the game to 4 solo tackles is a victory of monumental proportions. The entire offensive game plan appeared to be predicated on marginalizing Watt’s impact, and they had success doing so. The classic Bills sweep play on offense kept Watt’s impact at a minimum, and forced the Texans to pay more attention to McCoy, which in turn freed up Watkins and Clay for big chunks of yardage. The Bills did not hesitate to double, even triple up JJ Watt and they did a fantastic job at doing so. Even when they called slower-developing pass plays, Watt was not able to get in the face of Tyrod Taylor. Kudos to the coaching staff for drawing up a tremendous game.

Disgusted with his performance, I can almost guarantee JJ Watt was doing pushups the whole flight back to Houston, and is now jogging from the airport to his wood cabin. Alarm will be set 1 hour earlier than usual, which should allow him time for 50 additional logs he can chop before sunrise. After 15 raw eggs, he should be able to catch the bus to the Texans facility by 7am to start his one handed catch drills.

Fresh off an upset win in New England, the Bills will travel to Philadelphia to take on the 5-7 Fightin’ Chip Kelly’s. Expectations were sky high in Philadelphia, and the result have not quite followed suit. Sam Badford (not a typo) has been miserable this year, and the rest of Kelly’s roster rebranding efforts have not impressed either. The Eagles offense is constantly playing behind the first down marker, and has no semblance of a deep threat. The running game has struggled, as well. The Philadelphia defense is filled with a good amount of high level talent, but seems to be declining as the year has progressed. Oh, and it’s Lesean McCoy’s homecoming, so that should be fun.