Sabres: Coaches Challenges Are Taking Away From the Game

Risto has taken his game to another level this season. (Getty Images)

The only proper start for this write-up is an obligatory congratulations to Rasmus Ristolainen for his hat-trick recorded on December 10, 2015 against the Calgary Flames. A Buffalo blue-liner has not completed a hat-trick in over twenty years (Phil Housley 1987-88 season). Risto managed to notch all three goals in the short span of a single period of play (3rd).

The Sabres lost the game by a score of 3-4 after Sean Monahan was setup for the game-winner on a beautiful pass off of the stick of Johnny Gaudreau. It continues a trend of the Sabres losing to underperforming teams. That being said, Calgary deserves classification as a hot team, going 4-0-1 in their last five games and scoring over twenty goals total during that span. 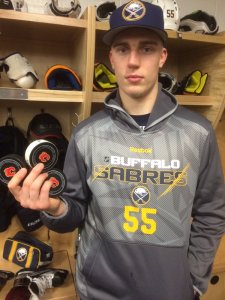 With a statistics roundup, it’s an impressive feat for Rasmus Ristolainen to be ranked third in Sabres goal scoring. He has seven goals which ranks him ahead of a banged up Evander Kane, and Matt Moulson, who hasn’t found the back of the net in 18 games. In the points department Risto has 22 which is five beneath Ryan O’Reilly’s lead. He has already put together an impressive 2015 campaign, we will continue to look forward to many more top-of-the-slot slappers.

Some might say that the “puck don’t lie” when summarizing Saturday night’s Sabres/Kings matchup. Many Buffalo households missed O’Reilly’s 100th career goal when channels were swapped for ESPN’s 30:30 on the Four Falls of Buffalo. Excuse my change in subject but, the ESPN documentary was one of the most eye opening, pride installing and rallying things I’ve seen in some time. It was a stellar overtime finish as the alternate captain was tripped-up by Alec Martinez’s outstretched stick when he toe-dragged around the defenseman. O’Reilly released an already loaded wrist shot and beat Jhonas Enroth on the blocker side which gave Buffalo a 2-1 OT victory.

Coach’s Challenges Are Detrimental to the Game 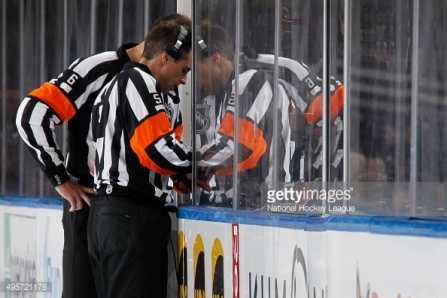 Coach’s Challenge: The Coach’s challenge is slowly bringing the pace of an NHL game down to professional baseball’s speed. (Photo Credit: Getty Images)

By the start of the third period the game had a heart-breaking loss written all over it as many fans couldn’t remove focus away from a disallowed Jake McCabe goal. The play began with Jack Eichel crossing the blue line, feeding a gorgeous saucer-pass that landed on McCabe’s left hand side which set him up for a single deke and score goal. The First Niagara Center exploded into cheers up until Darryl Stutter made the no-brainer move to challenge the scoring play. Brian Gionta was deemed offside by an insignificant amount that would [likely] not be visible to a line judge interpreting live play. The referee’s multiple replays on the small iPad-mini and long consultation with the folks in Toronto all but vacuumed the excitement out of the arena.

My opinion on this matter should be all but indicative at this point. For over 150 years the game of hockey has been played harmoniously without the use of video review. I can understand involving replay when it comes to goalie inference or an instance that gives a definite advantage. Gionta’s skate was ahead of the play by an inch. Realistically he wouldn’t have added to the play even if he was offside by a yard. The point I am making my way towards is the disregard for line-judges and their duties. If they cannot be relied upon for these types of calls the game gets harder to watch. Their job is to monitor movement across a line painted into the ice surface. We have been fine with a naked eye interpretation for years. Coaches have no reason but to challenge offside on any fast-break scoring play. This slows down the entire game, interrupts cheering and removes goal scoring from a league that has been suffering from a lack of it.

I would hate to see a system that has functioned so well for hockey open up to the boring and routine reviews that are now a part of Major League Baseball.

Moving forward it’s important for the Sabres to keep their sights away from the NHL scoreboard. Aim to build rather than view the remaining portion of the schedule as an uphill climb. This team has made definite progress, is riddled with a few injuries and is gradually seeing more and more goal scoring. An interesting fact regarding tonight’s game is the win count at Detroit’s Joe Louis Arena. It stands at an impressive 799 Ws, the Wings will look to take advantage of a club in the bottom ranks of the Eastern Conference.

Big things to look for tonight is whether O’Reilly can keep his seven game point streak alive and if the Sabres powerplay can take advantage of Detroit’s struggling 66% penalty kill unit (based on statistics compiled over 4 games). In their last ten games Detroit is 6-0-4 and Buffalo is 4-5-1. Puck drop takes place tonight at 7:30pm inside of Joe Louis Arena. 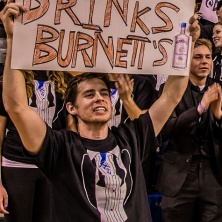 This entry was posted in NHL, ScottGoodwin and tagged buffalo, NHL, sabres, ScottGoodwin. Bookmark the permalink.