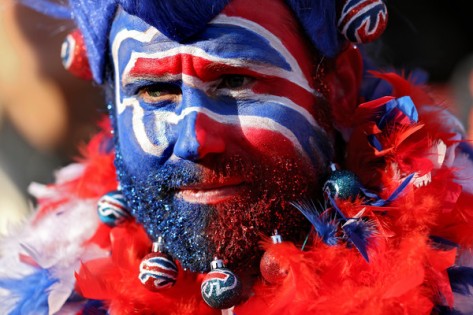 A pathetic performance by the Bills in the 1st half had Bills fans seeing red and feeling blue.

Summing this game up perfectly is the famous WGR call from a few years back: “what a freaking waste of jet fuel.” I could make so many comparisons between the Bills and the politicians in Washington DC but they’re probably not as funny as I think they are. However, I don’t care so here’s a few of them. Envision me reading these in a nasally north Buffalo accent, with about 25 years of cigarettes in my lungs.

“Congress has passed more bills than the Bills have completed passes, and that’s saying something!”

“Folks this isn’t the first time we’ve been let down by the people we trust in Washington.”

“Folks what do Congress and the Bills defense have in common? They don’t communicate and embarrass themselves regularly!”

“The only thing bigger than the Bills first half deficit is this country’s deficit!”

Thank you, thank you! I’ll be here all week. It doesn’t take a congressional investigation to realize what’s wrong with the Bills, so here are my observations on Sunday and the team overall.

1) Is the new and improved offense good enough? 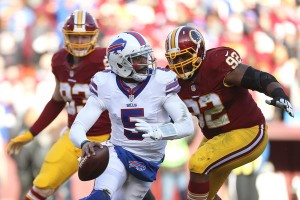 Tyrod’s stats are good but can they translate into wins? (Getty Images)

What if I told you that the Bills defense was 27th in DVOA, and the offense was 4th? In the modern day NFL, you would say that this is a more likely recipe success than if those rankings were reversed. This is why I am particularly discouraged about the last few weeks. The new-age NFL has created a league where points are easy to come by, and exceptional defense is a rarity. The Bills offense is a product of big plays, rather than consistent production. To their credit, Tyrod Taylor appears to have the capability to make downfield throws somewhat consistently, but outside of large chunk plays, the Bills offense leaves a lot to be desired. So how does a team that is 4th on offensive DVOA not have an offense that can play complete games and move the on a consistent basis? The simplified answer is that they’re the equivalent of a homerun reliant team in baseball. Feast or famine, if you will. Having an offense that can produce big plays is a valuable asset, but when they’re your main source of production, issues will begin to arise. Relying on low probability plays is not a way to create a productive offense. Tyrod Taylor is the best QB the Bills have had in a decade, but it is not good enough right now. This is not to say that Taylor cannot continue his development, because he very well could. However there is a long way to go for Taylor in terms of producing more consistently, while continuing his knack for the long ball. The pieces are in place around Taylor, and it is solely on him moving forward. I shouldn’t have to stress to importance of the QB position, but in the light of everything that has happened this year it appears to be overlooked in respect to the makeup of this Bills team. The defense has regressed, the coaching staff is full of clowns, and the QB has been average. Knowing what we know about NFL football today, upgrading average QB play needs to be the highest priority moving forward. It’s that simple. All options should, and hopefully will, be on the table during the offseason. Taylor will be the opening day starter next year, but I adamantly support drafting a QB very early in the draft. Like, first round early. If Tyrod can continue his growth, results will follow. If Tyrod cannot progress further, hopefully there’s a high-potential backup plan in place. 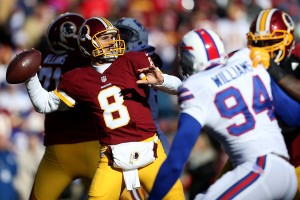 A classic cliché that has never proven to be truer than it is with the 2015 Buffalo Bills defense. For the first few weeks of the year I rolled my eyes at Joe Bills Fan who cried that Ryan had “ruined the defense,” but at this point those claims appears to be valid. It’s been an interesting game of tug-of-war between the personnel and the coaching that has transpired all year, and it came to a climax during the game against Washington. More reports that Mario Williams being unhappy, Rex Ryan (again) insinuating the blame falls on the players. Childish stuff. I, stunningly enough, am not an NFL defense coordinator and cannot speak to the x’s and o’s of the Bills defense, but I do know enough to say that Rex’s scheme simply does not fit the Bills personnel. Rex Ryan has run a successful scheme with the Ravens and Jets, so we know it works. It does not, however, work with this particular group of players. Most notably, the linebackers in the current defense have had a difficult time adjusting to a new defense. Preston Brown has struggled fully grasping the ins and outs of a MIKE LB spot in Ryan’s defense, and Nigel Bradham is playing a position that does not best utilize his strengths as a player. The linebackers have been the main recipient of the harsh transition, but the pass rush has been the most publicized. From consecutive 50+ sack seasons, to a nearly nonexistent pass rush. It’s perplexing, to say the least. There are two ways that this baby could go, but one is the heavy leader in the clubhouse. Rex Ryan could swallow his pride and adjust his scheme, even slightly, to better utilize the talent he has at his disposal. Being an NFL coach, however, comes with a grandiose ego and it is more likely that Rex proceeds running his scheme and adjusts the personnel around him. Looking Ahead:

A meaningless game awaits the Bills on Sunday against Kellen Moore and the Dallas Cowboys. Meaningless in terms of playoff implications? Absolutely. But at Hard Foul Sports, nothing is meaningless. The Bills should be without some significant pieces, and it should allow us as chance to see what some younger guys have to offer going forward. Karlos Williams and Mike Gillislee will get a chance during McCoy’s injury absence, Dezmin Lewis will hopefully spell the absence of Robert Woods, and Nick O’Leary and Chris Gragg can help contribute if Chuck Clay can’t go. It should be…fun to watch, right? Nothing says “December at the Ralph” like Kellen Moore fluttering a pass to Lucky Whitehead over the head of Kevin Reddick.