The way Detroit’s roster is set up reminds me of the type of team I’d have in the first couple years of franchise mode in NBA 2K.  They have an abundance of young talent – mostly at bargain prices – and a great deal of development to be done before this group is ready to compete at the highest level.  If I was playing with this Pistons team in some sort of franchise mode, I’d be elated. You’d have a hard time prying the controller from my hands before I had my way with this coming offseason, using the valuable players and cap space to try and improve upon what is already a promising core.  Even then, I’m sure I’d spend hours playing through next season, rounding out Andre Drummond’s game and doing my best to turn Stanley Johnson into a superstar.  The Pistons are far from a finished product, but that’s part of the reason they’re so intriguing to me.

I love teams made up of mostly younger players, as so many others do.  There are a lot of reasons as to why, but it can really be boiled down to vigor, juvenility, and excitement.  The Fab Five were so much fun because they were all a bunch of kids.  The Warriors have grown up and grown together over the past few years. There’s also Penny and Shaq. Kobe and Shaq.  You get the picture. These Detroit Pistons don’t deserve to be mentioned in the same breath as these squads, but if you squint really hard, you can see what the execs were thinking by putting this roster together. 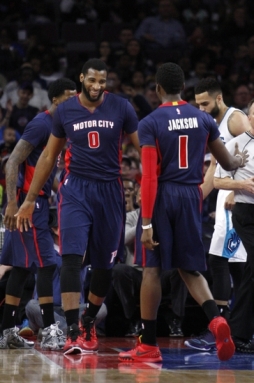 Of course, there’s more to it than getting a ton of young talent together in hopes that they can turn into something special.  The salary cap goes up after this year, and from the looks of it, some star players are going to be up for grabs. As of now, the Pistons are projected to spend about 66 million of the 84 million allowed, and a max deal for Andre Drummond would just about break the bank.  Reggie Jackson’s signed through 2020 and is due to make 15 mil next year.  The newly acquired Tobias Harris is under contract until the end of the 2019 season and will earn 17 million next season.  Assuming it takes a max contract to bring Drummond back or Detroit somehow finds a way to lure in another superstar, it’s not likely we’ll see drastic changes to this roster over the next couple years.

Now, since I’ve started writing this article, the three team trade between the 76ers, Rockets, and Pistons has been voided because of Donatas Montiejunas’ back injury.  Joel Anthony returns to Detroit and the team retains this years first round pick.  Montiejunas and Marcus Thornton are back with Houston. Anthony was expected to be released by Philadelphia after the trade, but now his status is a bit more uncertain.  The Pistons hold a team option for Anthony, and it wouldn’t be the craziest thing if they picked it up, bringing Anthony back to add some depth to the fron tcourt. On the other hand, Detroit could just as likely choose to move away from Anthony and free up $2.5 mil.

This team is 29 and 29, and they’re not currently in a playoff spot, but I can’t help but think that Detroit would give a lot of teams trouble as is, and they’re only going to get better.  The primary reason for me thinking this is flexibility.  Tobias Harris, Reggie Jackson, Stanley Johnson, Andre Drummond. All of these players are 25 or younger, and they’re all valuable — either as building blocks or trade assets.

Once this summer rolls around, I wouldn’t be shocked to see Stan Van Gundy and Jeff Bower move a lot of pieces.  Since Van Gundy was named the head coach and president of basketball operations in May 2014, he has proven that he’s not the least bit reluctant to switch around his roster as he sees fit.  Acquiring Reggie Jackson at the trade deadline last season was the most notable pickup of the Van Gundy era, but it was only one of seven trades he has made in the past year and a half.  Every single one of these trades have been kind to Detroit, and now they have options.

They can stick with the squad that they’ve got for the most part, and bank on the grown-up versions of Drummond, Harris, Jackson, and Johnson.  I’m sure they could also put together some interesting trade packages in an attempt to bring a superstar to the Motor City.  I don’t follow this team close enough to come up with an honest take on what I think they might do this offseason, but judging by the plethora of moves they’ve made since May 2014, I don’t think anything is off the table.

Whatever the future holds for this team, I think it’s safe to expect Van Gundy to continue to focus on long-term success. The Pistons haven’t seen the playoffs since this team changed ownership in 2011, but there is a buzz of optimism around them, and for good reason.  This whole thing boils down to trusting Van Gundy as both a coach and executive, and being patient enough for his vision to manifest itself on the court.  I’d say so far so good, but that doesn’t make it any easier for Pistons fans to swallow another season on the outside of the playoffs looking in… or does it?

The promise of a brighter future only keeps the angry mob of fans away for so long, but Van Gundy’s seat isn’t warming up quite yet.  All of these moves have been purposeful, and fans and management alike seem patient enough for this all to play out in the coming years.  For now, those around the Pistons organization are keeping the faith that Stan “The Plan” Van Gundy really knows what he’s doing.