Mike Tolsma and I have decided to take turns previewing divisions, and I would like to thank him for his awesome format for doing so. Like Mike, I also value depth, but I will also try and look at things from an analytical standpoint as I am often prone to doing.

Since Magic Johnson and Co. took over the Dodgers and started spending the money from their enormous TV deal, the team has essentially been the odds on favorite to win the division, and even the World Series. This season seems to be shrouded in a bit of doubt though, with the loss of Zack Greinke to the division rival DBacks and a mountain of injuries coming out of spring training. And a simple check of the calendar will remind you that the Giants are once again due to make it to the fall classic and once again take the crown as best team in the MLB. However life and baseball are a little more random than that, and this division seems like it might be rather complex. Aside from the Story of the year (or the Trevor Story so far rather), this division is filled with all sorts of interesting storylines, some of which have already been mentioned.

As far as the Dodgers go, can they overcome some of injuries and losses, and use what is still a pretty solid major league roster to grind out another division crown? When you have the best pitcher on the planet that seems like a possibility. The rest of the rotation looks a little iffy at times, however Brandon McCarthy and Brett Anderson are both due back at some point, and maybe Hyun-Jin Ryu can even come back from the dead and help anchor the rotation behing Kershaw and Scott Kazmir. The lineup might have some question marks as well, with aging players such as Carl Crawford still seeing significant playing time. However if Yasiel Puig can tap into his talent pool and recreate his 2013 and 2014 success, he may just be able to keep the lineup above water. Adrian Gonzalez is a model of consistency, and phenom Corey Seager has all the tools to be an elite major league hitter.

As far as the Diamondbacks go, this season may end up being a bit of a disappointment. Losing AJ Pollock was obviously a huge blow, and going forward it will be interesting to see if Greinke and Shelby Miller can anchor the rotation like they envisioned when they were brought in during the offseason. Greinke is obviously an ace, however he has struggled in first couple outings for Arizona. The team overpaid immensely for Miller, and they mortgaged their future in doing so.

The Giants once again have a very solid team top to bottom, however the back end of the rotation might be a question mark, and they also might have overpaid for pitching when the brought in Jeff Samardzija. If he and fellow first year Giant Johnny Cueto can hold up behind Bumgarner, this team has a chance to definitely make the 4th World Series in 7 years come to fruition. 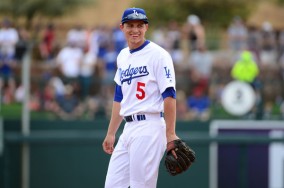 Will the addition of Corey Seager be enough to take the Dodgers to the World Series?

As mentioned before, Seager is as real as it gets when it comes to prospects. Although he probably profiles better at 3B going forward, this team has a need at short and that’s most likely where he will stay for the time being.

Look, it’s incredible that Dodgers have such a wealth of talent, and Urias is just another example. The teenaged lefty is on the precipice of reaching the majors, and at the end of the day the only reason he might not reach the majors this season is because of his age. With the injury concerns that surround the Dodgers staff, it might not be a stretch to think that Urias can come up and help the Dodgers on a tough division.

If you want to see what the Diamondbacks system could have looked like, just go and take a look at the Braves top prospects. The Giants have some interesting pitchers that can help moving forward, including some reliever type pitchers that can bolster the pen late in the season. Also, Colorado has a top 10 system at this point, however with a team that isn’t really close to being good they probably won’t make much of an impact this season.

This division is complicated, and the Dodgers are by no means odds on favorites to win it again. However I’ll bet on the young talent and cornerstones they have in place in close division. It wouldn’t surprise me at all, however, to see the Giants making a run for another championship.

This entry was posted in cruzserrano, MLB and tagged baseball, cruzserrano, mlb, nlwest. Bookmark the permalink.