NBA Westeros Conference First Round Preview: You Win or You Die 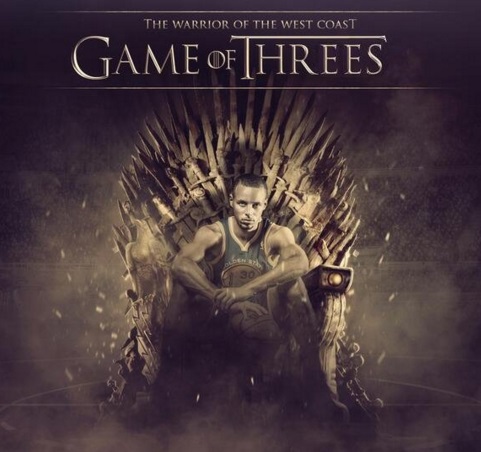 The regular season went out with a bang last Wednesday, delivering a satisfying finish to a wild ride of a season. The first round of the playoffs kicked off this weekend, but the second round doesn’t start until May, so there is still time to catch your breath before the playoffs really get fun.  This would be a very appropriate time to grab a beverage of your choice and sip on it while you ponderously stare off into the middle distance, asking yourself the difficult questions about the NBA.

Do the Thunder have what it takes to take down Golden State?

How will desperation affect the Clippers?

Will this season finally start to take a toll on the Warriors, or do they continue to be a juggernaut?

Why did the basketball gods let the Rockets into the playoffs?

There are plenty of these appetizing little questions for us to nibble on before the playoffs really get going.  Of course, any speculations or judgments that we make right now mean nothing, but if you’re an NBA fan, the first round of the playoffs probably doesn’t confound you. Parity isn’t usually the this league’s forte, and I think that is especially true in this first set of matchups.

The Warriors are not going to lose four games to the Rockets when they’ve only lost nine all season, and it would take the perfect storm of flukes, injuries, and Gregg Popovich going missing for the Spurs to fall to the Grizzlies.  The Thunder in all likelihood will beat the Mavericks, assuming Kevin Durant and Russell Westbrook didn’t disappear alongside Pop.  The series between the Clippers and Trailblazers is more interesting to me, but I don’t see either of these teams making a deep run.  The first round is usually pretty chalky, but if nothing else, it should give us a better idea of what we should expect as these playoffs move forward.

Here are my quick takes on the first round matchups in the West. They’re mostly focused on how this sets the stage for the rest of the playoffs. 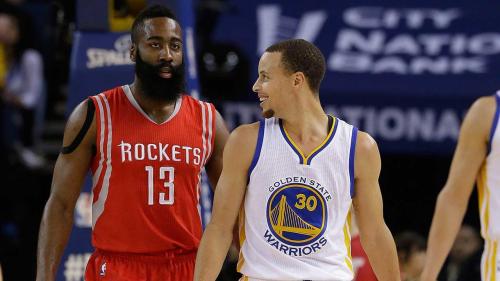 It was all laughs for Steph Curry and the Warriors in Game 1 until he tweaked his ankle. (Getty Images)

The Warriors have been so great over these past two years that I don’t have any desire to read about them or to watch talking heads try and top each other’s superlatives about this team. In a way, it has become boring to me, like Linsanity or Tebowmania or any other sports story that you can’t go through your day without hearing about.  The team itself is the furthest thing from boring, and I watch them any chance I get, but the discussion is tired at this point.

They won a championship and Steph Curry won regular season MVP… everyone talked.

They started this season off red hot… everyone kept talking.

They put together the ultimate season and beat Chicago’s record, Steph Curry hit 400 three pointers and (almost certainly) won MVP honors for the second year in a row, and once again, Golden State rolled into the playoffs looking like a force of nature… the talk is starting to sound like static to me, so forgive me for looking a little glossy eyed during this Houston series. I’m not going to change the channel, but I seriously doubt this series will move the needle for me at all. It’s like watching a rerun of Scrubs in that regard.

As much as I  loathe watching this Rockets team, they do deserve credit for finishing strong.  James Harden is supremely talented and managed to have another great year even though he showed up to training camp out of shape and only played defense on his own terms. When Dwight Howard is focused and involved, he can have a huge impact on the game, however his shining moments are few and far between. Houston has a very talented roster, but they don’t have a shot against the Warriors.  They might be able to steal a game if Harden absolutely goes off and Golden State has a bad game from behind the arc, but I can’t see this series going any more than five games.

The Grizzlies had no match for Tony Parker, or anyone really, in Game 1. (Getty Images)

It’s hard to say that the Grizzlies are just happy to be here, considering their recent playoff history and that they’ve been within sniffing distance of a Western Conference title for a while.  This can’t be a fun experience for Memphis fans, being stuck with a team that has virtually no shot to win the West.  Maybe a little solace can be found in the fact that their team still has the same tough, physical persona, and the roster is full of guys you don’t want to mess with.  However you choose to view it, this is going to an unwatchable series from start to finish.

In Game 1, Vince Carter (yes, that Vince Carter) shot the lights out, and that was the only silver lining for the Grizz.  Kawhi Leonard, who was just crowned Defensive Player of the Year for the second straight year, has no equal and will do what he pleases. Same goes for Aldridge. The thing is, they probably won’t need to log a ton of minutes in this series if it plays out like it did in Game 1, and that’s what I expect to happen.  Memphis’ best chance to win might be to start a brawl and hope for mass ejections.  Unlikely. 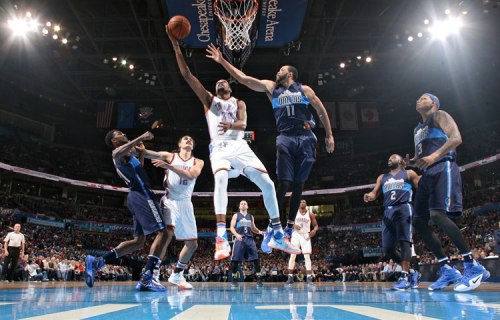 Kevin Durant and Co. did whatever they wanted against undermanned Dallas in the first game of the series. (Getty Images)

Before I saw what Russell Westbrook and Kevin Durant did to the Mavs in Game 1, I was a little uncertain about how this round would go for the Thunder.  That is not the case anymore. Oklahoma City is a clearly superior team and this is their series to lose.  I figured Dallas, being a veteran team that is well coached, might give them some trouble. They still might throw some tricky looks at the Thunder, but if they end up stealing a game, it will be because Durant, Westbrook and company didn’t do enough.

Dirk Nowitzki has been surprisingly efficient throughout the regular season and that trend carried over into Game 1.  He was doing everything in his power to get the offense going in true Dirk fashion.  He shot 15 times, usually in situations where he created his own space, and scored 18 points.  Unfortunately for Dirk, he was the only moving part in an offense that scored 70 points, and I don’t think Wesley Matthews or an injured JJ Barea are going to pick up the slack.

Although this probably won’t be a competitive series, it might be worth watching at times.  Rick Carlisle is a master strategist who won’t go quietly.  If nothing else, he’ll brew up some creative schemes to try and make Billy Donovan and his staff adjust.  Maybe this shows us something about the two superstars on the Thunder, and how they react to Carlisle’s monkey wrenches.

The return of Blake Griffin to his old self should have Portland fans worried. (Getty Images)

This is by far the most intriguing series, and probably the most competitive one.  In one corner we have the Los Angeles Clippers who are one bad series away from a roster cleansing, and in the other we have a young and hardy Portland team led by Damian Lillard, who has already built a reputation for stepping up in big moments.

Game 1 of this series was a story of Los Angeles’ physicality and defense.  Damian Lillard knew going into this series that he would see a lot of pressure in the form of traps and double teams, and that’s exactly what happened. He actually handled it well and found open teammates quite often,  but it was what happened once those teammates had the ball in their hands that was the problem. C. J. McCollum and Al-Farouq Aminu were a combined 6 for 23 from the field, something that I see bending the other way as this series continues.

On the defensive end, the ‘Blazers have their work cut out for them.  They’ve typically been more concerned with defending the long ball and conceding a bit of the mid-range stuff, and that isn’t the best formula against the Clippers.  If they do continue to play that way, DeAndre Jordan, Blake Griffin and Jamal Crawford will continue to eat them up inside.

Portland’s shooting will improve, and their young players will probably settle down a little more each game, but the Clippers are already where they need to be to win this series.  Lillard going supernova could change this series, but it would take consistent offense from the other guys and a well-executed change in the team’s defensive game plan if they were to win the series.  I don’t think that happens, but I think they come close.