The Bills 2016 season will not be defined by a loud offseason but by how well Tyrod Taylor plays in his second year in Buffalo. (Getty Images)

The Bills offseason has been a comedy of dysfunction, errors and plain bad luck. Since Rex Ryan declared that his team “won the offseason” the football gods have seemed determined to render that statement false, even if it was kind of silly in the first place. The team and it’s fan base has taken a beating, once again leading to low expectations and the belief in some circles that this season may already be shot. It’s pretty hard to not feel this way. From top draft pick Shaq Lawson needing surgery shortly after Doug Whaley said he wouldn’t, to the hiring of Rob Ryan after he led the Saints defense to one of the worst defensive seasons of all time in a move of seemingly blatant nepotism, to reports of LeSean McCoy fighting a cop, to the litany of suspensions and training camp injuries, it’s been a chaotic offseason from hell.

But how much does it matter?

The loss of Marcell Dareus for 4 games is a mistake the Bills must not compound. (Getty Images)

This question may sound ridiculous at the outset. How could this level of uncertainty and chaos within a team not have a negative impact? And that answer is of course it does, but perhaps not as much as one may think. Among the litany of stories that has made fans shake their heads in disgust in the lead up to this season, 3 things stand out to me as concrete negatives right now: the injuries to Shaq Lawson and Reggie Ragland and Marcell Dareus getting a 4 game suspension and his subsequent decision to enter rehab. Ragland and Lawson were highly touted by the Bills and national observers and were thought to be potential day one contributors and we all know how good Dareus is, so to lose any of them for any extended period of time certainly hurts. However the thing about the offseason and preseason, is that negative stories get the most press and therefore the most attention. There’s a certainty to them, a tangible nature that fans can look at and judge clearly. This is in stark contrast to the potential improvements the Bills may have made in the same time frame, improvements that have been overshadowed by an offseason that could leave you convinced that either the Bills are cursed, or don’t know what they’re doing.

Typically when a team improves, the changes are tangible. New players, New coaches, new tactics. Something fans can wrap their minds around and discuss with some level of certainty, even if that certainty is usually proven false. That’s not the case for the Bills entering the season. The important players and coaches remain mostly the same from 2015 to 2016. So what improvements am I referring to then? The hidden gains of player development and growing comfort with the coaches’ schemes. Tyrod Taylor working over the offseason to improve his game doesn’t make any headlines. LeSean McCoy feeling comfortable and healthy entering the season doesn’t break news on NFL Network. Greg Roman having an entire offseason to tailor his offense to the strengths of Tyrod and his playmakers doesn’t get hundreds of retweets. However these factors may prove to be just as important if not more important than the stories that make fans get down on the team. It can’t be stated enough: the power of having a good offense can wash away a lot of the issues plaguing the Bills. It happens around the league all the time, especially in this new era of the NFL that the Bills are finally looking to become serious participants in for the first time in 16 years. 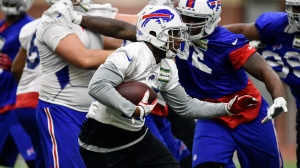 A refreshed LeSean McCoy could be a game changer this season. (Getty Images)

Fans are experiencing a bit of cognitive dissonance when it comes to trying to figure this team out. I know I am, especially when it comes to feeling good about a Bills offense entering a season. It’s been quite some since I felt this excited to watch the Bills play offense. Typically you enter Bills season hoping they don’t throw up on themselves offensively, and are able to scrape out enough points to win tight games. To actually feel excited to watch them play is an alien experience. As a result it’s harder to trust than it perhaps it should be that the offense will fulfill their promise. This, combined with all of the rest of the emotional baggage we carry as Bills fans causes some apprehension.

The difference between the perception of the Bills as a mess and what we may see on the field this year crystallized this past Saturday for me. Before the preseason game against the Giants, fans got rocked by two back to back surprises, but not “surprise party” type surprises more like “surprise, you have a flat tire” type surprises. The release of Karlos Williams and Marcell Dareus’ decision to enter rehab came within about 30 minutes of each other, and while time will tell the real impact of those stories, at the time it was two more negative pieces of news to place on top of the pile of crap that had been the Bills offseason. It was pretty depressing, and if my Twitter timeline is any indication, many fans joined me in that feeling.

And then the game started.

Of course (and this should go without saying but sometimes a disclaimer is necessary) it’s just preseason. Every fan has their own way of how to judge these glorified exhibitions. But when Tyrod faked a Giants defender out of their shoes, rolled out and hit a streaking Charles Clay 50 yards downfield on a dime, I forgot everything else. It was a truly incredible play, something only a handful of people in the league could pull off, preseason or not. Between Tyrod’s other great throws, McCoy looking quicker and shiftier than he has yet to look in a Bills uniform and a defense doing a really good job on the Giants, from the starters to the 4th string, the game ended with me in a great place. Even while the game must be taken with a huge grain of salt it was still a great reminder of what really matters, and that’s what these high level playmakers can do on the field. Despite how loud the offseason has been with tales of Bills dysfunction, it just may be the hidden gains the team has made that will win the day as the most important facet of the offseason. But for now we wait until opening day. Because no matter which way you think this season may go, seeing is believing.