Breaking Down The Bills Schedule

The Bills will look to avenge last year’s tough loss to the Jaguars, a game the 2016 Bills cannot afford to lose. (Getty Images)

The final week of preseason is the football fan’s equivalent to a child on Christmas Eve. After months of planning and analyzing, after our season tickets are purchased, fantasy teams are drafted and suicide pools joined, NFL previews are read and preseason games are endured, now we wait. It’s the quiet before the storm that is the NFL season. As we try to kill a little time before Week 1 kicks off, it’s nice to take one more look at the schedule. Like glancing at the Maps app on your phone one last time before embarking on a trip, studying the schedule can help settle the inevitable nerves that pop up before the season starts. We know some parts of the trip will be bumpier than others, but at least we know there’s a path to get where we want to go, which in the case of the 2016 Buffalo Bills is the postseason. While the schedule has been incessantly analyzed since it’s release in mid-April, after weeks of training camp and preseason games now is the best time to get a true gauge on the Bills opponents before the season starts in earnest.

When the schedule was first released, at first glance it looked pretty difficult for the Bills, highlighted by a visit to Seattle on Monday night, and hosting the NFC finalist Cardinals at New Era Field (By the way, how long will it be before this stops being weird to say?). And of course, our annual date with Tom Brady is expected to be an uphill battle as usual. However, how difficult is the schedule as a whole? Let’s take a look.

For this ranking, I ranked each of the Bills games in one of five tiers of difficulty (From most difficult to easiest):

The Must Win Tier (All at home):

These four games are the easiest games on the Bills schedule. However, because of this there’s an added pressure that exists; a loss in any of them will cripple the Bills playoff chances if not put them on life support. In order for the Bills to prove themselves a good team, these are the games the Bills must not only win, but dominate. It can’t be stated how important it is for the Bills to reestablish themselves as a dominant home team in 2016. These are the only games the Bills will play this year where it will be possible for them to win and still leave fans not feeling great if they do so in an unconvincing fashion.

Jacksonville’s roster has improved, not sure you can say the same about Blake Bortles.

Toughest Game in the Group: Jacksonville

Jacksonville has made great strides improving their roster, especially on defense adding impact rookies Jalen Ramsey and Myles Jack while Dante Fowler Jr will return from last year’s season ending injury. Adding these young players on top of some of the free agent acquisitions they’ve made, I expect the Jaguars defense to give the Bills more trouble than one may expect. However, there’s no fear, Blake Bortles is here to deliver the Bills turnovers. He’s thrown 35 interceptions over the past two seasons, good for most in the league in that span. Jacksonville has two excellent receivers in Allen Robinson and Allen Hurns that make the most of Bortles inaccuracy, but if the Bills play smart Bortles should hand the game over to them.

But Evan, you ask, why aren’t you choosing Miami as the toughest game of the group? Well from a place of objectivity I probably should. Miami is a pretty good team that’s not that far behind the Bills. However, the Ralph has been a house of horrors for Ryan Tannehill, and I see no reason why New Era Field won’t be the same. I believe I speak for most Bills fans when I say Miami coming into Buffalo doesn’t scare me in the slightest.

The Easier Said Than Done Tier

At New England (without Brady)

This section is defined by games Bills fans may be a tad overconfident about. Los Angeles was very close to being in the Must Win pile, but as the cliche says, going on the road in the NFL is never a gimme.

The Jets game at home could be placed in a higher tier of difficulty, but I firmly believe in Ryan Fitzpatrick’s regression. He threw a league leading 31 interceptable passes last season (as per Cian Fahey’s 2015 Quarterback Guide), and the only reason the 15 actual interceptions he threw last year wasn’t in the mid-20s was because of sheer luck. The Bills and Jets roster wise are close, but the advantage at QB plus playing at home in front of a raucous home opener crowd on Thursday night will should win the day for Buffalo.

Patriots fans think they can still win with Jimmy Garoppolo under center. The Bills need to prove them wrong.

It’s difficult to get a handle on this one. Patriots fans seem pretty confident that this will be one of the games they can win to help stay afloat during Jimmy Garoppolo’s stewardship while Brady is suspended. Bills fans have been marking this game as a win since Brady’s suspension was announced. Someone’s going to leave very disappointed. Rex Ryan must unleash his defense on New England’s inexperienced quarterback to help Tyrod Taylor and the offense, since I expect them to be slowed by a good New England Front 7. You simply cannot lose to New England when Brady is out, and a loss here would be bad for the Bills confidence only 4 games into the season.

The Toss Up Tier

This tier is defined by road games against opponents on close to equal standing as the Bills. If things go to plan, these four games could have the most impact on the Bills playoff hopes. A 3-1 record probably means the Bills will win 10+ games, a 1-3 record will leave the Bills staring at “In the Hunt” graphics as we try to figure out some way for them to get in the postseason if they can somehow pull off a couple upsets to get to 9-7.

Baltimore was pretty terrible last year because they got hurt, however, even at closer to full strength I don’t think too much of their roster. They’re lacking weapons surrounding an inconsistent regular season quarterback on offense, and some of their best defensive players are aging. Miami and New York are typically tough to beat on the road, but I don’t think they’ve made the requisite changes to improve enough after both getting swept by the Bills last season. However because of sheer NFL quirkiness it’s safe to expect the Bills to lose one of those two games. 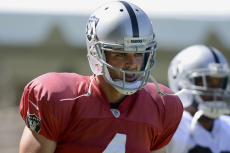 If Derek Carr develops into a consistent performer, things could get a little tricky for Bills out in Oakland.

Oakland worries me because of their youth. Young players can take massive strides in the span of one offseason. I have my doubts about Derek Carr, but the Raiders are a team that has the possibility of winning 10 to 11 games themselves this year if their talent takes hold. Guys like Khalil Mack and Amari Cooper can win games off the back of just a few spectacular plays. And Oakland’s Black Hole is notoriously hard to win in.

These are the games people are referring to when they say the Bills have a tough schedule. They’ll be underdogs in each, perhaps considerably so. Arizona is the most well rounded team in the league, and Cincinnati isn’t far behind. Pittsburgh has an offense boasting a top 3 receiver, top 3 running back and an elite quarterback. And New England with Brady back speaks for itself. Obviously it’ll be a bear to win even one or two of these games.

There are 2 positives to playing these tough teams however. I listed this tier as Measuring Stick Games because these are the types of games that don’t carry pressure. From outside of the season looking in, it’s not really fair to expect the Bills to win any of them, except maybe Pittsburgh at home late in the season. As a result the team should be able to play loose and find out where they really stand against the league’s best. Another big positive for the Bills is that 3 of these 4 tough games are at home. Now the level of the advantage the Bills will derive from playing at home this year remains to be seen but we’ve seen what it can do for Bills teams of the past. The most recent example was in 2014 when the Bills were able to take down Aaron Rodgers and the Packers. I’m targeting Arizona as the game most winnable on this list, despite the Cardinals being probably the best team on it. It’s a West coast team coming east to play a 1:00pm game and the Bills have 10 days off to prepare. 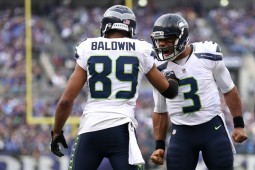 Russell Wilson, Doug Baldwin and the Seahawks defense have been dominant at home for years. The Bills will have to play the perfect game to pull off the upset.

This game gets a tier all its own. Far better teams than the Bills have shown up in Seattle, especially for a primetime game, and have gotten slaughtered. If I said I had no expectations for the games in the previous tier, somehow I have even less for a Bills trip to the Pacific Northwest. In a weird way I’m looking forward to this game quite a bit if the Bills hold up their end of the bargain and have a solid start to the season. Going into such a daunting environment, to play Russell Wilson and the most intimidating defense in the league will serve as a stress test of sorts for Bills, and just being able to hold their own will prove quite a bit about them.

Wins Needed From Tier to Make the Playoffs: Just leave Seattle with your pride intact Bills.

By breaking the schedule into tiers, you gain a bit more clarity about the Bills chances this year. Yes the schedule is tougher than years previous, but the path to the postseason is still there. Of course the margin of error is small, but it was always going to be. The plan is clear for 2016 Buffalo Bills; handle business, win the games you’re supposed to, and the playoffs and relevance will be within their grasp. Crap the bed against an inferior opponent and the Bills will get what they deserve, another year without the postseason.