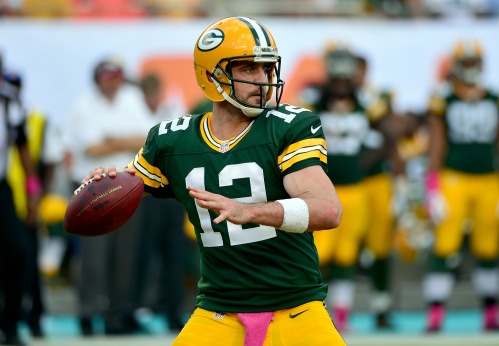 Aaron Rodgers has his number one target back and is ready to unleash on the NFL once again. (Getty Images)

With football season only days away you might find yourself trying to catch up on everything that’s happened around the league. Who’s supposed to be good and who’s in the running to be a tire fire this season? Well hopefully you’ve been checking out the Hard Foul Podcast NFL preview series “32 Teams, 32 Questions” but if you haven’t you’re in luck. Behold my bite sized preview for each NFL team. A few sentences on each team, short and to the point.

Julio Jones is awesome. Not much else is. Matt Ryan can’t stop throwing interceptions in the red zone, that’s a slight issue. A mediocre defense makes 8 wins a stretch.

Great coach, great (at times) QB. Aging stars gives them a ceiling, won’t be able to keep up with the AFC North’s best.

If Tyrod Taylor can continue to play aggressively while limiting turnovers, the sky’s the limit for the offense. A defense full of high level players at some spots and replacement level players at others will make it an inconsistent unit. A healthy Bills team wins at least 9 games.

Both a 15-1 record and Cam’s spectacular 2015 will be hard to repeat. However, the Panthers may have a worse record than last year and still be just as good. They are Seattle East. Super Bowl contender.

Jay Cutler is older than you think. Healthy WRs will make the Bears dangerous offensively, but they lack defense to put them in the playoff hunt. Franchise is racing the clock to figure out roster before Cutler hangs em up.

The Bengals may have made the Super Bowl if Andy Dalton doesn’t try to tackle a Steelers player after throwing a pick last season. If Dalton stays healthy, Cincy has one of the best rosters in the league.

They’ll stink again, but this time there’s finally a plan. Playing young guys will give this season a purpose. Instead of a tire fire, this Browns season is a planned demolition. Deshaun Watson or bust is the mission.

Season rests on two rookies, Dak Prescott and Ezekiel Elliott, a simultaneously scary and exciting prospect for Cowboys fans. A stellar offensive line gives them a shot, a mediocre NFC East gives them an even bigger shot, but unless Romo gets back early and stays healthy, the drop off from Romo to Dak and a crap defense will be too much to overcome.

All defense and no QB makes Denver a dull team. But seriously, unless Denver’s defense is just as good as good as they were last year they will not be making the playoffs.

Matthew Stafford has a lot to prove without his security blanket Calvin Johnson. A decent defense and Marvin Jones won’t be enough to cover for the loss of Megatron and lead them to the playoffs, but they’ll be better than people expect.

The Texans tried their hand at Extreme Home Makeover: Backfield Edition this offseason with additions of Lamar Miller and Brock Osweiler. I don’t believe in Brock as a long term solution but he’s certainly better than the pupu platter they had QB last season. AFC South favorite. 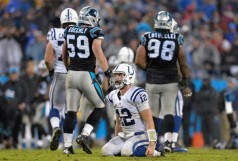 I don’t know what Andrew Luck did to deserve this but the Colts seem pretty committed to not finding help for the poor guy. Keeping both GM Ryan Grigson and Coach Chuck Pagano were the dumbest moves of the offseason. If they weren’t in the AFC South, this team’s playoff hopes would be dead in the water.

I still refuse to believe a guy named Blake Bortles will be a good NFL quarterback. However if he only gets a tad more consistent and safer with the football, the Jags talented roster legitimately could challenge for the division. But probably not, since it’s the Jags.

Andy Reid’s plan of building a solid, boring team may finally pay off this year. Even with the potential issues surrounding Jamaal Charles, KC will be able to screen pass their way to 10 wins in an unsettled AFC West.

Aaron Donald and Todd Gurley are each in the top 5 in the league at their positions. The rest of the team is decidedly not. I feel bad for these two stuck with this talentless bunch. But at least they get to live in LA, so that’s nice. They go 7-9, as is tradition.

Newly redesigned stadium. New coach. New washed up vets they have to rely on in Mario Williams and Arian Foster. Same old inconsistent and average Ryan Tannehill. If it weren’t for the Bills in the same division, the Dolphins would get a lot more notice as one of the worst franchises of the past decade.

I admire the guts to shove a middle finger at conventional NFL wisdom to trade so much for Sam Bradford. This really might be the best team he’s ever played on. Unfortunately he’s only going to be playing on it for 8 weeks in between DL stints.

How New England looks in the first 4 weeks of the season is one of the biggest mysteries of the season. Jimmy Garoppolo won’t be good, but Rob Gronkowski is. Patriots have to win 2 out of their first 4 without Brady to feel comfortable. That being said, once Brady is back the Patriots are the presumptive AFC favorite.

There are few things in the NFL more consistent than the Saints offense over the past decade. They’ve finished in the top 12 in points scored for 10 years straight. Unfortunately their defense has been pretty spotty for the past decade too, and reached its apex of crap last season. An aging Drew Brees will have to win shootouts, once again.

A bad defense last year, an influx of talent from a free agent shopping spree and the draft will help. The Manning to Beckham connection will flourish as usual, but the lack of running game is what keeps Big Blue from being clear cut NFC East favorites.

Ryan Fitzpatrick played the best season of his career last year. The optimistic Jets fan can say that a light bulb finally went off for him, that Fitz is a changed man. I’d give a 98% chance of that not being the case.  A tough start to the schedule and a regression in FitzMagic will sink the Jets.

You hear that? That rumble in the distance? That’s the Oakland Raiders hype train and it seems like everyone is aboard. The talent on the roster is exciting, headlined by Khalil Mack and Amari Cooper. But for the Raiders to reach 9+ wins, Derek Carr must get better and that’s not a given for me.

Trading Sam Bradford for a 1st and a 4th to the Vikings was an obvious move. Starting rookie Carson Wentz Week 1 was not. A fascinating decision to throw their prized rookie to the fire will leave the Eagles with few wins but finally some answer as to their future at quarterback.

A team ravaged by injuries last year but still getting to the precipice of the AFC Title Game only to hurt by suspensions this season. The loss of Le’Veon Bell for 3 weeks hurts. The loss of Martavis Bryant for the season will hurt more. But as long as Antonio Brown and Big Ben stay healthy, Pittsburgh are a threat to the Patriots.

The Chargers had the season from Hell last year. It can’t be that bad again. Philip Rivers finds himself the best QB in the division. Despite a roster that’s not that talented, if the Chargers stay healthy I expect them to challenge for the AFC West.

San Francisco is a team that finds themselves in transition from a dumpster fire to a slightly smaller dumpster fire. They start Blaine Gabbert at QB and have a roster bereft of talent, but at least they have a competent coach in Chip Kelly. They’ll be terrible but if they beat out Cleveland for DeShaun Watson in the draft it’ll all be worth it. It’s a race to the bottom.

Losing talisman Marshawn Lynch will hurt, Thomas Rawls will have to recover from injury to fill his shoes. But the defense is still spectacular. And Russell Wilson ascended to a higher level of quarterback in the second half of last season. If he maintains that quality, Seattle is the Super Bowl favorite, WIlson will be top 3 in MVP voting.

Famous Jameis Winston gives the Bucs a taste of hope. Despite a disasterous start to his rookie campaign, Winston became much safer with the football last season down the stretch. Excellent weapons and solid defense helps their cause, Tampa is a playoff sleeper.

The Titans will be better than you think. Not playoff good, but “competitive in most games” decent. They’ve built a solid running game to complement Marcus Mariota, who appears to be ready to take the leap. Unfortunately the uninspired hire of Mike Mularkey at coach tempers my excitement a bit.

Kirk Cousins has been asking if we like that for months now, and my answer is still no. Cousins is still inaccurate when going down the field, and even though the Redskins made the playoffs last year, not beating a single team over .500 is a sign that they haven’t proven much. Captain Kirk goes 7-9 in a contract year.