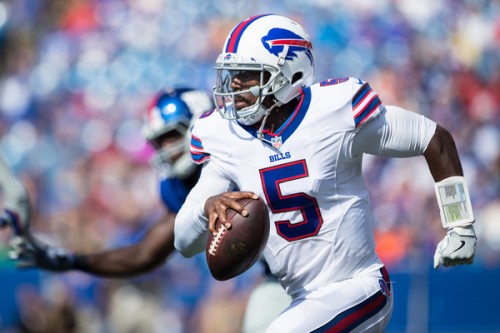 Tyrod Taylor returns to Baltimore as the Bills kickoff the 2016 season. (Getty Images)

Welcome to my first ever NFL picks column.  One of my favorite reads each week was when my favorite writers would pick every NFL game and give their reasons for doing so.  My basic philosophy in making picks is to look at the quarterbacks, the head coaches and the pass rush in that order.  So, if you are a bad QB with a bad head coach with a crap pass rush, I’m not going to pick you. Finally, remember when reading my picks that Vegas wasn’t built by winners, so obviously don’t bet all your money on my picks… just bet some of it (no not really). Hopefully, you will enjoy reading my picks each week as much as I enjoy making them.

The picks start off with an NFC South rivalry between the Bucs and the Falcons.  Seems like it was just yesterday that Matt Ryan was the hot young QB, but now it is Jameis Winston. Vegas thinks that both teams will have losing records this year, but I think that the Falcons will have the better year just because I don’t think that Matt Ryan has jumped the shark quite yet.  I also think that Dan Quinn will prove to be a legit NFL coach, while Dirk Koetter will be coaching his 1st NFL game as a head coach so give the Falcons a slight coaching edge as well. I’ll give the 3 and take Atlanta.

Exotic smash mouth vs Shaun Hill or Sam Bradford.  The Vikings have a fantastic defense and one of the best running backs of all time, while the Titans have Mike Mularkey coaching Marcus Mariota. I don’t think much of Mularkey, but I really like Mariota and rookie Derrick Henry.  I think that the Vikings offense will be out of sync just enough that the Titans and their underrated defense pull off the upset.

The MoneyBrowns come in to Philly to take on rookie QB Carson Wentz and rookie head coach Doug Pederson.  This ugly game is actually my best bet of the week because I am a big believer in new Browns coach Hue Jackson.  Jackson as offensive coordinator of the Bengals squeezed every last bit of talent out of Andy Dalton and will try to do the same with RGIII. I think the Browns make enough big plays in the passing game to make it worth taking the points vs a quarterback who played his college football in North Dakota making his 1st NFL start.

Probably the best of the early games is when Cincy travels to NYC to play Jets.  It is a battle of the slightly above average Andy Dalton vs the slightly above average educated Ryan Fitzpatrick, who apparently went to Harvard. Eifert will be out for the Bengals and they will also be breaking in a new offensive coordinator as well. Todd Bowles really impressed me as a head coach in his 1st season with the Jets and I think that he will have his Jets ready to play and will give the Bengals all they can handle.  I wish the spread was 3, but I will still suck it up and take the Jets and the points at home.

Everyone’s favorite team to make the leap, the Raiders travel across the country to play a 1pm game vs the aging Saints. This could be a make or break year for Sean Payton and Drew Brees as another year with a losing record could start the drive to rebuildingville.  With Derek Carr, Amari Cooper, and Khalil Mack the Raiders have 3 of the best young players at their positions.  So why on earth would I take the Saints then?  I believe in the “west coast team playing at 1pm” difficulties… especially for a young team like the Raiders.  I think that Brees can still make some magic while the season is still young. Lastly, I think that the Saints really know this could be their last shot at making a run and will come out with guns blazing early in the season.

The LA Chargers(?) travel to KC to open the season against Alex Smith and the Chiefs.  I actually like some of the moves the Chargers have made in the offseason.  I think that Travis Benjamin will excel now that he has a legitimate quarterback throwing him the ball. Ken Whisenhunt and Philip Rivers made sweet music together back in 2013 and they are back together this year.  And Melvin Gordon can’t be that bad… can he?  Unfortunately, the Chargers are going against a very good Chiefs team on the road to start the season.  Arrowhead is a very tough place to play and Andy Reid showed last year that he is still one of the best coaches in the league. If the line was 7.5 I would be all over the Chargers, but at 6.5 I think the Chiefs barely cover.

The Bills travel to Baltimore to take on the Ravens in a game that could be a crucial playoff tiebreaker if both teams live up to expectations. Tyrod Taylor, Ed Reed, and Rex Ryan all return to Baltimore to take on Joe Flacco and a Ravens offense that struggled greatly last year.  The Bills offense was a surprise and carried a defense that was a huge disappointment. I cannot imagine the Bills defense not improving and I would think that Taylor improves as well in his second year as a starter.  I think the vertical passing game of the Ravens runs right into the strengths of the Bills defense and I do not think that the Ravens will be able to muster together enough of a running game to keep the Bills honest.  I think the Bills win this one straight up. 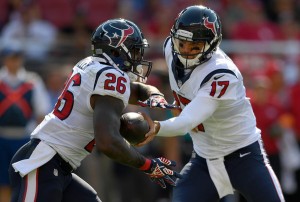 The 72 million dollar man Brock Osweiler is the man in Houston now as the Bears come into town to take on the Texans.  As much as Osweiler will improve the Texans at QB, I think it will be running back Lamar Miller who will be the biggest signing for the Texan offense.  Miller was criminally underused in Miami and should provide balance to a Texans offense that revolved are Nuk Hopkins last year.  The Bears could be sneaky good on offense this year if athletic freak Kevin White can stay healthy as he nicely compliments Alshon Jeffery in the passing game giving Cutler another big target to throw rocket balls too.  I don’t think the Texans are the team to let Cutler get going as Watt and Clowney should harass Cutler enough to give the Texans the win.

The last early game on the day is the Packers traveling to humid and hot Florida to take on the Jaguars.  5 points is an odd spread as there are very few scores that involved a 5 point differential, leading me to think that Vegas doesn’t have a great opinion on this game.  To me this game strikes me as a garbage time game in that the Packers will be up for most of the game and it could be a garbage time TD that covers the spread for the Jaguars.  Looking at that line of thinking you see one of the best WRs in the league in Allen Robinson with a quarterback who is not afraid to throw it up to him, so I think this is a win for the Packers, with the Jags only making it close in the 4th quarter.

The biggest spread of the week is for the team making the longest road trip of the week as the Dolphins are spotted 10 vs the Seahawks.  This game looks like a mismatch as Seattle’s dominant defense gets to go up against Ryan Tannehill and the pop-gun Miami offense.  The only chance Miami has in this game is hoping their defensive line cause Seattle’s patchwork offensive line trouble and possibly force a turnover or two.  I think that Wilson proves to be too elusive and Seattle runs away with the win.  On a fantasy note… I do like Kenny Stills as a random starter this week as he could get loose for a big play as the game gets out of hand.

Will Dak Prescott live up to his preseason performances? (Getty Images)

No Romo, no problem?  Dak’s the way we like it? While the Cowboys offensive line can give the rookie all day in the pocket, he will have to face a real defensive game plan this week and not a preseason plan as he faces the Giants and aggressive defensive coordinator Steve Spagnuolo week 1.  The Giants got rid of Coach Coughlin but kept the McAdoo offense that fit Eli so well.  I think that the Giants put up some points on offense and Prescott makes a few rookie mistakes and the Giants win this one.

You don’t stop a Jim Bob Cooter offense, you can only hope to contain it.  The Colts secondary is in shambles and Stafford even without Megatron has enough weapons that he can take advantage of a beat-up Indy defense. Andy Luck will be making his triumphant return and has great young receivers in Hilton and Moncrief… but can his offensive line protect him?  I think this game could be high scoring with the Lions keeping it close enough that it makes sense to take the points.

Jimmy Garoppolo will feel like he is in Dorne surrounded by sand snakes as he comes into Phoenix to play the Cardinals on Sunday night.  I cannot see Garoppolo doing well vs a fast and aggressive Cardinal defense that will send the kitchen sink at the young QB.  However, do not discount the Patriots as they have a very underrated defense lead by 2 great linebackers in Collins and Hightower that should be able to handle David Johnson. I do think that the Cardinals can confuse the young QB enough to get a deflating win over the Patriots.

One of the biggest matchups for this game will be Antonio Brown vs Josh Norman and the rest of the Redskins defense.  Will the Steelers be able to get the ball to their top playmaker with the Redskins not having to worry about Le’Veon Bell or Martavis Bryant?  Cousins will be able to attack and put up points versus an inexperienced Steelers secondary with speedster DeSean Jackson and matchup nightmare Jordan Reed.  But, I believe that Roethlisberger will be able to work some of his magic and keep some plays alive long enough to make just enough happen that it makes sense to give the points.

The last game of the week is the LA Rams going into San Francisco to take on the much quieter Chip Kelly and the 49ers.  The 49ers are in my opinion the favorites to land the #1 pick in the 2017 draft as they are mostly devoid of talent on both sides of the ball (with the exception of Hyde + Torrey Smith).  The Rams have one of the best running backs in the league in Todd Gurley and possibly the best (non JJ Watt) defensive player in the league in Aaron Donald. I can’t believe that I am recommending that you take Case Keenum on the road on Monday Night Football, but I guess that I am.