Sputtering Bills Can’t Put It Together In Baltimore 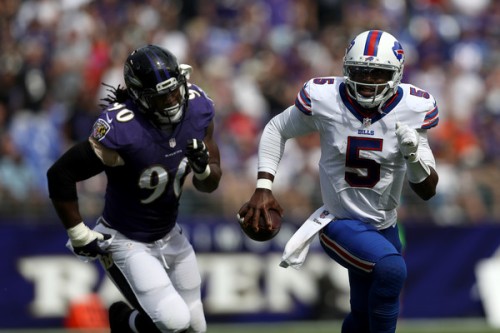 Tyrod Taylor could get nothing going, playing one of his worst games in a Buffalo uniform. (Getty Images)

Sunday’s game was a complete flip of what was expected.

I spent a lot of time in the lead up to the season trying nail down what I thought I knew about the Bills. While we had no idea if the team would be just mediocre or playoff good, it seemed like fans had a pretty good idea as to how the Bills would win games: a good offense and a defense held together with tape and glue that just needed to keep it together enough to give the team a chance.

Well after week 1 how laughable is that notion now? The Bills turn in their worst offensive performance in a season opener in 30+ years and the defense played well enough to win. However despite how surprising the defense was, I can take little solace in their performance. The Bills offense left me dumbfounded yesterday. Never in my worst nightmares for how the 2016 season was going to start did I imagine a 7 point, 160 yard effort. A zero deep throws to Sammy Watkins effort. A 5 yards per attempt from Tyrod Taylor effort. This is where I must give credit to Negative Nancy Bills fans everywhere that I’ve doing battle with for months, you were ready for that abomination masquerading as an offense. Any sort of appreciation for a nice defensive game gets completely swallowed by the Bills black hole of an offense.

The Impotence of Tyrod Taylor

I was really looking forward to watching Tyrod Taylor play in Year 2. Not just because of what a good year could mean for the Bills in terms of wins and losses but because the dude was just fun to watch. Even when he wasn’t playing his best in 2015 it seemed like he was always good for a few plays that dazzle and leave you saying “That was pretty cool”. Take for example the Bills game in Tennessee last season, a game yesterday reminded me of. Tyrod, limited by his weapons and having a bad day through the air eventually started to take the game into his own hands and make plays on the ground, a decision that saved the game. I’m considering going to Kinkos and printing out flyers to put around the city because that man was nowhere to be found in Baltimore.

I can deal with ineffectiveness. I can’t deal with tentative play. From the very first play of the game Tyrod showed that he was willing to take whatever the defense was giving him instead of imposing himself on the Ravens. He looked like a guy who was doing everything he could to not make a mistake instead of the player who just signed an extension and should have the confidence to take risks to make big plays. While I acknowledge the offensive line was very poor and forced Tyrod into tough positions many times, too many other times Tyrod had more time in the pocket and was more than happy to quickly check the ball down. In fact fear to pull the trigger and go down field was evident on the first play of the game:

I couldn’t hold out on you guys….

1st play of the game for #Bills offense pic.twitter.com/SP21rcWIuz

Nowhere is this fear of mistakes more evident on the stat sheet than the Bills embarrassing lack of a SINGLE deep pass to Sammy Watkins. We don’t know for sure that it wasn’t just an uber conservative game plan by Greg Roman until we see the All 22 footage, however I find it hard to believe there weren’t a few opportunities to throw a few deep passes to Watkins when he was singled up. And yet Tyrod couldn’t pull the trigger. The whole point of having Sammy Watkins is when your offense sputters, you can heave the ball up to him and he can make a big play for you out of nothing. Not only could Tyrod and the Bills not execute this, they didn’t even attempt it. Truly unacceptable by them. Once it became evident that Tyrod wasn’t going to take any chances a small Ravens lead felt like it was 25 points. Late in the game, only down by 6, knowing that you’re literally one play away from changing your fortunes, the Bills already seemed hopeless, a feeling reminiscent of terrible QBs of the past. Even though they only lost by 6, the return of this feeling that I thought had been extinguished is the biggest loss of them all.

Give Rex credit for the defense but not much else. 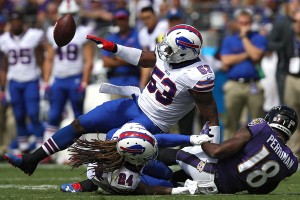 The defense kept them in the game and was the only bright spot. (Getty Images)

For so many the instinct after a game like that is to instantly blame the coach. Chants of “Fire Rex”  were ringing throughout the Twittersphere. If that’s how you feel I have to ask you what game you were watching, because I don’t know how you watched yesterday and don’t place the vast majority of blame on Tyrod and Greg Roman. Last season Rex was savaged for having a poor defense and received none of the credit for a good offense, an assessment I think is fair. However we have to be consistent. The defense was not spectacular, but it was perfectly adequate yesterday. I would sign up for 16 games of bending but not breaking right now. I’ll give Rex the credit for that.

There was still much to be frustrated about in the performance of Rex Ryan. The stupid penalties still linger. Special teams penalties, unsportsmanlike conducts, it was like the Bills were playing the hits of 2015. I argued last year that coaching may not be to blame for the high penalty count, that it was more aberrational. However 2016 started right where 2015 left off. A pattern is building and unless the penalties take a nosedive soon, Rex will have to take the heat for them. Rex’s worst moment yesterday was the challenge of LeSean McCoy almost touchdown on the Bills only scoring drive. I can’t think of anything more Drought-era Bills, than Rex Ryan throwing a challenge flag as Tyrod is literally crossing the goal line to score at the same time. I know the spotter in the booth told him it was a sure fire challenge win so that’s why he did it. But when the ball is at the 1 foot line, and it’s early in a tight game where you might need those two challenges, to throw the red flag there lacked common sense. Believe in your offense to gain a foot in two plays Rex. Add in the mismanagement of timeouts and an inability to get plays in on time, and it was a nightmare of a day for Rex and the coaching staff. But at least the defense showed up.

Stop snapping the ball with 3 on the play clock all the time.

We can’t be sure if it was a technology issue, indecisiveness by Greg Roman calling the plays or Tyrod struggling to translate the play to his offense, but the Bills were once again constantly under the gun at the line of scrimmage, struggling to get the snap off on time. Not only does this open you up to running rushed plays, not giving a quarterback time to adjust and risking stupid delay of game penalties but it also has another underrated effect. By not snapping the ball until the play clock is almost at zero, you telegraph when the play is going to start. Defensive lineman don’t have to worry about going offsides because they know the Bills will have to either snap the ball, call timeout or take a penalty, so Ravens defenders don’t have to time any snap counts, just go when the play clock is at :01. This contributed to how much penetration the Ravens were getting into the backfield.

That game was a Snoozefest.

Typically when I’m watching football on Sundays I have the Bills game on the main TV and NFL’s Red Zone channel on my computer. If you’re not familiar with Red Zone (where the hell have you been) it’s a channel that lets you watch all of the games, taking you from game to game watch the most exciting action. It’s tremendous, really changes the Sunday experience. I was almost as excited to watch Red Zone again as I was to see the Bills back in action. This is until the game started. The Bills/Ravens game very quickly became a snoozefest, watching the Bills scuffle down the field while the Ravens weren’t much better. It was probably the worst game of the week. Meanwhile the Red Zone is showing me Drew Brees and his 4 touchdown, 400 yard day and Derek Carr’s mad comeback to beat him. I see Kansas City come from 21 down to beat San Diego and Jacksonville push Green Bay to the limit. All of this great football happened around the league and Bills were nowhere near it. Not only is it discouraging to watch the Bills lose, but to watch them lose while yawning made it even worse.

Thursday night versus the Jets is a much bigger game than I could’ve foreseen because of how poorly the offense looked for Buffalo. The Bills have to win and they have to look competent doing it, or else the Bills may be staring down the barrel of 0-4, an outcome I didn’t think was possible. We’re on to New York.