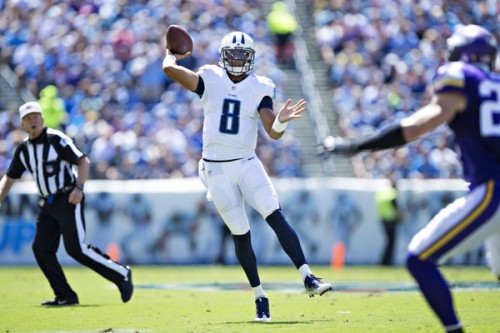 Marcus Mariota and the Titans could be a great value against Detroit this week. (Getty Images)

Welcome to week 2 daily fantasy fans. If you stacked Brees and Co., sprinkled in some Oakland receivers with Spencer Ware you probably cashed in everything you entered this past weekend. I didn’t do so bad myself, but there’s always room for improvement. And like my Math professor says “Practice, make it perfect like Michael Jordan.” Here are this week’s picks, hopefully they help fill out your lineups.

This is probably the most I’m willing to spend on any QB this week. Brees has trouble with road games and I think he’ll be overly owned this week. I know this matchup is going to be tempting to load up on for a lot of people based on last weekend’s NO/OAK game. This game has potential for a shootout but basing your picks off of last week’s performance is not advised in my opinion. If the Giants get up early expect them to use Jennings to manage the clock and keep Brees off the field. I’d also like to note that there is a 60% chance of rain for game time.

Coming off of a productive week, Marcus faces a Detroit defense that allowed 450 yards of total offense last week. I’m hoping he’ll be low owned and have him in plugged more than any other QB. There is a real shootout possibility here and this is my favorite QB pick of the week.

Joe plays a much softer defense in Cleveland this week. He has lots of weapons to distribute the ball to and appears in sync with the newly acquired Mike Wallace.  I don’t love him this week but certainly a good pick that could be overlooked this week.

I’m not sure if Blake reaches his value this week but coming off an impressive 300+ passing game against a Packers defense. He has the weapons to take advantage of the San Diego defense this week.

Even without D. Thomas there’s a possibility that Siemian picks apart an Indy defense that gave up 3 TDs to Matthew Stafford last week. 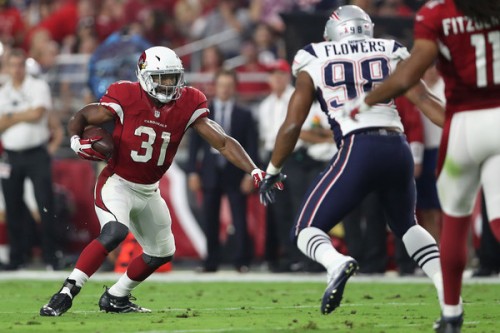 David Johnson should see an increase in touches this week, he could take your lineup over the top. (Getty Images)

Guaranteed to get the majority of the work at home this week. A solid option if you want to pay up for it. Always possible that he breaks out a huge run and he can catch out of the backfield.

One of my favorite RB picks for this week, going against a terrible Indy defense. He can catch out of the backfield and looks like he’s picked up right where he left off last year.

I really like Tennessee’s matchup this week and Murray has a high ceiling this week. He got a great start to his season last week. Another pass catching back here who will likely see a good amount of touches. Did you see that flip last week!? If not go look it up and try to tell me that he doesn’t want to get into that end zone.

Ivory is ruled out again this week for a general medical issue (whatever that means) so Yeldon will get the majority of the work again. He has a better matchup this week after the Packers last week. He played 63 out 72 offensive snaps against the Pack. 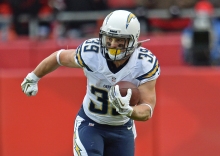 Danny Woodhead with a good matchup is always a tremendous value.

With Keenan Allen out, look for Rivers to check down often to Woodhead coming out of the backfield. A potential dual threat with significant rushing yardage last week.

Both of these guys are tier one operators. I think you get what you pay for here and both have great weeks. I like Green a little more because of the game script but either of these guys could have huge weeks with big play always a possibility. Both will be highly owned.

No real middle ground here for me this week, I’m spending big elsewhere and grabbing low value high upside guys. If you’re looking for someone in the middle, I’ll list off a few here worth looking into yourself.

I’m surprised DraftKings didn’t raise his stocks higher this week. Plug this WR2 into your lineups as a WR3. Brock Osweiler likes this rookie A LOT.

Another Titan here that I like for their matchup this week. And another rookie, with 7 receptions on 11 targets for 76 yards. It’s only a matter of time before Mariota feeds this kid a TD and this week could be the week. 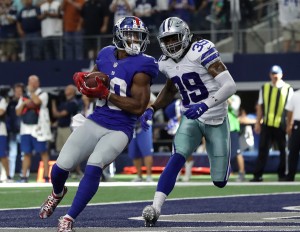 Victor Cruz returning to his old self could be great value until his price increases. (Getty Images)

The Salsa is back! I have no idea why Cruz is priced this low. If anything was proved last week, it’s that Cruz still has his step in more ways than one.

Another Titan (Surprise!) One of Mariota’s favorite targets. Should get plenty of red zone looks.

Playing the majority of the offensive snaps last week. Allen had a TD and a 2-point conversion so I think he’s a major target for Luck in the end zone.

The whole receiving corps in Baltimore is up for grabs and I think any given Sunday someone could have a big week. Pitta is trying to earn his way back from on and off seasons. He has a good match up to do it with this week.

After a tight defensive battle with Buffalo last week expect the Ravens to take advantage of Josh McCown and the Bears.

With Tom Brady still suspended an improved Dolphins defensive looks to get to an inexperienced Garoppolo in a crucial division game.

That’s it for Week 2! Feel free to tweet me with lineup questions or any other Daily Fantasy questions you might have. Good luck this week.