Who the hell is Quincy Enunwa? Your DraftKings lineup needs to find out. (Getty Images)

Welcome to Week 3 daily fantasy fans. I did okay last week, hopefully you did better than okay. My best lineup was just over 170 points so a lot of room for improvement.  Let’s get to the picks that will help you create your winning lineup.

The younger Manning has had a modest start to this season but could see a break out here with the matchup against Washington this week. There’s plenty of weapons and his QB rating through the first 2 weeks is over 100.

Carr has quietly put up two 25 point games to start the season off.  I really like both sides of this matchup against Tennessee, it could potentially be a high scoring affair.  The Oakland defense is going to have their team playing from behind a lot this season. Which means Carr will be called on to throw the ball. 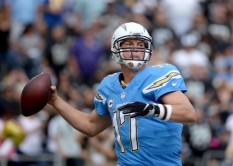 This game has the highest vegas line at 51 this week. I like Rivers more than Luck in this matchup. I think Rivers has more weapons at his disposal and the Colts defense isn’t much to talk about.

I’m all over Mariota again this week. For this price I think he exceeds his value. He was part of my top lineup last week and I like his matchup with Oakland this week.

Williams has more touches than anyone else in the league through the first two weeks.  He has the whole backfield to himself again with Le’Veon Bell still suspended. DeAngelo is good for a 100+ rushing game and a 4-5 catches for 35 yards no matter what defense he’s faced with.

Cincinnati is currently ranking 32nd against the run through the first two weeks. He gets at least 5 targets and 20 rushes this week. If Denver gets up early expect more out of C.J.

I like Elliott as a flex play this week. He hasn’t been playing bad football despite a pair of fumbles last week.  The Bears defense has injury problems and Elliott could take advantage and have a huge week. If the Cowboys get up early they will manage the clock and keep the ball on the ground.

Murray gets a great matchup as receiving back this week in a potentially high scoring game against the worst defense in the league.

Gordon is the first 100+ yard rusher for San Diego in 22 games. The workload is solely his. He going to have a ton of touches against a Colts defense that has allowed three top-10 running backs this year.

Charles Sims is filling in for Doug Martin and could be tremendous value for you this week. (Getty Images)

Sims is looking at a high output RB2 type of week with Doug Martin out with a hamstring injury.  Tampa runs the ball about 35% of the time. I think Sims gets enough touches to make him a viable value play this week.

Fozzy took over for Stewart last Sunday and rushed for 100 yards and caught 3 passes for 31. He will likely be sharing touches with teammate Cameron Artis-Payne who is getting the start and is more of a Jonathan Stewart type back. I think Fozzy might snake a TD on the goal line this week.

Dak only seems to be getting better every week, hopefully that continues to continue for Dez’s sake. The two need to be in synch to have success. Dez put up 20 points last week and could put up more against beat up Chicago defense.

The talk here in NYC in that Revis Island is no more and he has lost a step in the offseason. I like the matchup for Maclin. This game could have a sneaky shootout potential.

You could almost make an argument for any of the options that Philip Rivers has this week. Personally I like Benjamin the best.  He has the highest ceiling in my opinion.

Diggs has more than 50% of the Vikings receiving yards and 40% of the receptions. He plays a better defense this week, but I think the Vikings have to get him involved.

Brandon Marshall is a risky start this week, and if you don’t want to pay up for Decker, Quincy could be a nice WR2 this week. If Marshall does start he could even be a decoy to free these guys up. Enunwa is tied with Travis Benjamin for highest catch rate for receivers with double digit targets (93%).

I have Witten in my season long league, so I might be a little biased. Jason and Dak seem to be looking more in synch each week. With the Bears defense focusing on Dez, Jason could get a lot of check down looks.

Dennis Pitta’s chemistry with Joe Flacco could make him a contest changer in your lineup this week. (Getty Images)

Pitta lead the team in targets last week and has been receiving more than 25% of the Baltimore receptions through 2 weeks. Second in the NFL for Tight Ends to Greg Olsen. He is clearly an important part of the Ravens offense and a favorite target of  Flacco’s. I think Pitta can beat the Jags LBs and get open this week. A lot of value here.

Really like this matchup like I said earlier. Clive is a red zone threat that can make a play at any point during a game.

This is more or less a gut play for me. Watching the Bronco’s defense dominate last week has me on a high for them. I think they get to Andy Dalton often.

Despite losing to a New England team that apparently doesn’t know how to lose no matter who’s under center, I think this D has a rebound week against Cleveland.

My favorite cheap defense pick of the week. The Bears are starting Brian Hoyer and their offense is a mess right now.

That’s it for Week 3, as usual feel free to tweet me with lineup questions, start or sit advice and any other questions you may have about Daily Fantasy or DraftKings in general. Thanks for reading!