Giants Let One Slip Away to Washington 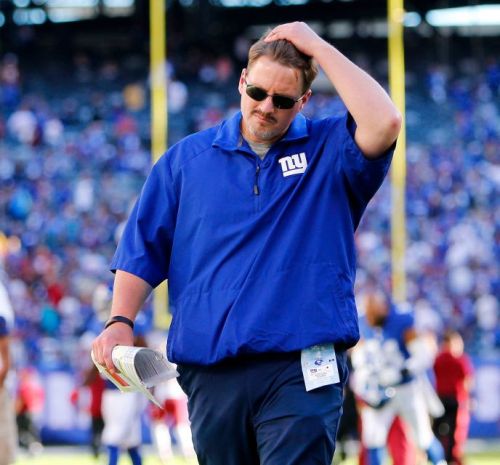 Yes, Eli screwed up. Yes, Eli deserves a pass. I’m not going to defend him, because your opinion on Eli is what it is. He is who he is. He’s a leader, a champion, and occasionally the guy who throws a boneheaded interception to cost the Giants the game. Sunday was one of those occasions, and my rationalization of him didn’t make the ending suck any less.

If you told me New York would get the ball with just under two minutes remaining, carrying two timeouts, and needing only a field goal to win the game, I’d feel great about their chances. Or at least that’s how I always used to feel. The Ben McAdoo edition of this offense is still very much something I can get behind, they’ve been reasonably productive, and it seems like the framework is there for bigger and better things that seemed unreachable while the unit was in the hands previous offensive coordinator Kevin Gilbride. But this past Sunday, Big Blue’s offense sputtered in a way reminiscent of their past. But now, instead of conservative play calling bringing them down, it was almost the exact opposite.

About halfway through the third quarter, the Giants literally gave up on the ground game. The final carry happened with 22:58 left in the game, bringing the team’s total to 21 rushes for 121 yards – something like 5.8 yards per run. It’s remarkable that Ben McAdoo went this direction with his play calling, especially after Week 2’s matchup against the Saints where I thought he was wasting opportunities by sticking with the run for too long. I can’t have it both ways, I guess, but I’m not alone in either criticism.

The third quarter is where the momentum and the win probability flipped, and I have to think the sudden neglect for offensive balance played a role. I’m interested to see how McAdoo decides to finish games from this point on, because his offense has – for the most part – lived up to expectations in the first part of the game, but stumbled down the stretch. It should and will be taken into consideration that he’s still getting his feet under him as a professional head coach, but twice so far he has trusted his judgement instead of taking what the opposition was giving him. I understand it’s a hell of a lot easier for me to call him out on this stuff after the fact, after countless people have gone through this game with a fine-tooth comb, but I’m definitely going to keep an eye on McAdoo’s ability to read the temperature of the room and make better strategic adjustments in-game.

The path he went down wasn’t the craziest thing in the world; Breeland and Hall missing from the secondary did seem like an invitation to throw the ball wherever Josh Norman wasn’t. Eli probably shouldn’t have passed the ball every single time he took a snap, but I don’t hate the idea of pushing the ball downfield with these receivers and this quarterback. That doesn’t change after Eli threw the game away in the fourth, by the way. His two interceptions in the last three Giants possessions of the game were a death sentence, and they were both his fault. The game was out there for the taking, New York’s defense was bending but not breaking, and all he had to do was orchestrate a little fourth quarter comeback – something he had done 28 times before. Instead, he blew it.

Eli Manning lost the game for us. Odell Beckham Jr. cried, embarrassed himself with a field goal practice net, and was an all-around distraction (still catching 7 for 121, though). Washington pulled off a fake punt. It was the kind of game that would make Giants fans sick to talk to anyone about for at least a couple days (part of the reason this is being written on Tuesday and published on Wednesday). All of these things can be brushed off fairly easily though. Yes, winning cures everything, but also this was a little bit of a “game from hell” as Bill Simmons might say. Eli may have a few games like this, but I wouldn’t expect many. Odell Beckham Jr. will only see Josh Norman one more time in the regular season, and I’ve heard he’s made peace with the kicking net. Fake punts don’t happen every week. The optimist in me wants to look at this and think they may have killed a few birds with one stone against Washington, they’ve gotten these hiccups out of their system, and they’ll look better going forward.

Of course I’m telling myself what I want to hear, and it is within the realm of possibility that Eli will regress, or OBJ will become a bigger distraction than he is an asset. I don’t think that to be the case though.

Oh yeah, the other side of the ball. It didn’t come as a shock that Cousins and the passing game was able to move the chains at a pretty decent clip, although the big plays to DeSean Jackson and Jamison Crowder didn’t look great on the secondary. Washington ran the ball 30 times for 90 yards, which made me pleased the defensive line, but also reminded me of the lack of persistence in the ground game from McAdoo.

Ultimately, I don’t think there should be serious concerns with the defense. They’re still very good at stopping the run, and their pass defense isn’t atrocious. They allowed five field goals, or they held Washington to five field goals that might have been touchdowns. Even if this is a middling D that’s just strong up front, I’m happy with that. If New York is going to win a lot of games this season, it’s going to because the offense hits its stride. The Giants can make due with Spagnuolo’s unit that is already a clear improvement over last year. However, they’ll only go as far as the offense takes them.

Here’s hoping Eli’s mistakes and OBJ’s immaturity won’t be weekly issues. I don’t think they will be, even though I bet we’ll see another bad game from Eli, and we’ll probably see OBJ lose his cool again before it’s all said and done. I’m choosing to look at this as a perfect storm, where a lot of things went wrong at once. I doubt Big Blue’s games in the near future will play out like this on offense, but if they do, I’ll start criticizing McAdoo and questioning everything I think I know about my favorite team’s quarterback and top wideout.

One response to “Giants Let One Slip Away to Washington”