Phillip Rivers is chomping at the bit for the chance to save San Diego’s season. (credit: USATSI)

Hello again, and welcome to week 7 of my DraftKings weekly column, where I offer up some my picks each week for the 1pm Sunday only slate. It looks like a bit of a tough week this week, I don’t like the matchups for a lot of the more expensive guys and there’s not many obvious bargains. So, I’m mostly covering the middle tier guys this week. Hopefully, I can help you fill any holes you might already have in your lineups or help you start fresh and give you a core group of guys that you can build your own lineup around.

There are only 4 QBs this week listed $7k or more this week and I’m not really digging any of them. Tom Brady and Matt Ryan are the only two I would consider as playable this week. There’s a lot of potential between $6500 and $6000 so that’s where I’m focusing this week.

I think this Chargers team is better than their record shows and that might be stating the obvious. The Falcons have allowed an average of 301.5-yards per game over the last 4 games. Rivers is definitely capable of hitting that 300-yard mark even with Travis Benjamin listed as questionable.

The over/under for this game is 47 and I’m taking the over. Both of these guys are very middle of the road QBs and have similar stat lines on the season. Both of their completion percentages are mid-sixties and they’re both averaging around 265-yards per game. Derrick Carr has one more game played and is most likely the better of the two but faces the tougher defense. Bortles is facing an Oakland defense that has allowed the most passing yards total this season. I like the shoot-out potential here.

Cousins had been very quiet and very consistent all season long. He is currently a top 10 QB and is facing a Lions team that has allowed 17 passing TDs on the season so far. That’s almost 3 TDs a game. Kirk has only one 3 TD game on the season and that was against Cleveland who is second to last in the league for TDs allowed with 16 just in front of Detroit. This could be Cousins biggest week of the season so far.

If you’re looking for a bottom of the barrel, minimum priced QB, I think Kessler is definitely worth taking a look at. He had 336-yards passing and 2 TDs for 24.7 fantasy points last week. The Bengals defense is averaging 20 fantasy points to QBs this season. Kessler could be settling in to the Browns offense and if Terrelle Pryor Sr. returns that only helps him with the in-state rivalry matchup against Cincinnati.

By this point in the season the high end guys are pretty obvious: Bell, Murray and Johnson. Murray is my favorite even though he had a down week against Cleveland. I’m going to go through more solid starts and bargains this week. 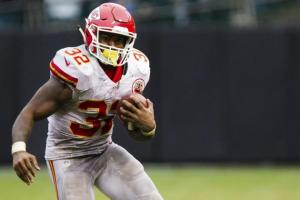 Charles or no Charles, Spencer Ware will get his touches. (credit: Kelley L. Cox/USA TODAY Sports)

Even with Jamal Charles back in the lineup Ware has found a way to stay productive. The former backup is still carrying the majority of the work load. Ware had 24 attempts to Jamaal’s 9. With Charles listed as questionable the current state of things in the backfield of Kansas City looks like they will remain the way they are, at least another week. New Orleans also averages the most fantasy points per game to running backs in the league.

With Doug Martin ruled out again this week and Charles Sims still on IR Jacquizz is going to have another busy Sunday. He had 101-yards rushing last week on 30 attempts and caught 5 for 28-yards on 6 targets. There’s certainly some points per reception value here. Rodgers had just about 21 fantasy points last week and that was without finding the end zone. Oh yeah, and the 49ers rank last in the league with an average of 150-yards rushing allowed per game this season.

Figuring out what is going on in the Jags back field has been tricky. Oakland’s defense is known to be vulnerable to the run. I’m considering the cheap stack option; $7500 gets you all the Jacksonville RB touches. Oakland allowed 183 yards total rushing along with 45 fantasy points last week. If the two combined manage to get 30, that makes it a worth while play.

Looking for cheap long shot? Try the Lions or the 49ers backfields. With Theo Ridddick and Carlos Hyde ruled out this week there will be a plethora of backs trying to gain a foot hold. The starter for the Lions is slated to be Zenner and the 49ers have Mike Davis. I’ll list all the back that could see touches as coaches will most likely go with the hot hands. Take these guys at your own risk.

A.J. had had a couple of slow weeks and is due for big week. He gets a sweet matchup this week against a Cleveland team that’s allowed over 1000 reception yards and 8 TDs to receivers this season. Green is going to be one of my top WR targets this week.

Cooper is averaging 10 targets and 6 receptions a game, which ranks top 10 in both categories. The Jags secondary is improving but I think they’ll have a hard time handling someone of Amari’s caliber who’s averaging almost 100-yards a game.

Kansas City had a nice home matchup against New Orleans this week. On average the Saints are allowing over 200 yards receiving to WRs per game this season. Vegas is projecting 28 points for Kansas City this week. Maclin has a shot at seeing at least 7 of those points.

Jordan Reed had been ruled out of this weeks contest due to a concussion, so all the wide receivers in Washington should see an uptick in production this week. The Lions are allowing an average of 45 fantasy points a game to WRs and have given up 7 TDs to wide outs in the last 4 games. James Crowder is also worth a look this week too. 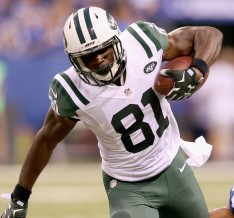 Not the cheapest bargain but I think this could be a sneaky low ownership play this week. Everyone will most likely be scared off by the QB situation or looking at Marshal as the obvious red zone target. The biggest reason I like this play is the fact that the Ravens defense has allowed 10 receiving TDs in the last 4 weeks. I won’t have a lot of Enunwa in my lineups but I will be looking at him.

Matthews appears to be developing a nice chemistry with his quarterback Marcus Mariota. He now has two scores in the last two weeks and hasn’t dropped a target in three weeks. Coming off of his best game of the season Matthews and the Titans face the Colts this week.

Henry had scored three weeks in a row now and his price has only gone $300 since week 5. I’m not sure if draftkings just missed this one or are counting on gates to cut into his production. Either way he’s a steal going up against Cincinnati who allowed over 200-yards to the New England TEs last week.

With Dwayne Allen ruled out this week Doyle becomes the every down TE for the Colts. He caught a TD last week and had thee total on the season so far. It’s not the best matchup for a tight end this week but you get what you pay for here, but if he finds pay dirt he becomes a valuable play.

The Patriots play a Pittsburgh team with no Big Ben this week. Sign me up. This will most likely be the highest owned defense of the slate. Pretty self explanatory here.

Another quarter back swap game here so again, there’s probably going to be a lot of people on this pick. The Jets offensive line didn’t look like it could slow anyone down last week. I don’t think it matters who’s under center they’re not going to have a lot of time to throw the ball.

That’s all for week 7, as always feel free to shoot me a tweet or comment in the section below. Good luck! 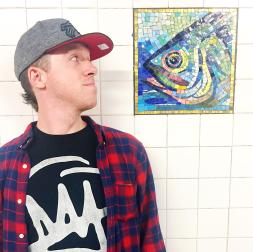