The first game on Sunday is also one of the best games of the week as AJ Green and the Bengals take on the Redskins in London. (Getty Images)

Don’t call it a comeback… but yes that is a winning record you see for last week. I am sorry for losing money for everyone that had been fading my picks.  But you know what they say about karma.  I hate how the NFL only has 2 late afternoon games this week. There is no reason to have a 9am London game and 6 teams on byes during the same week.  Speaking of byes, why doesn’t the NFL just give every division their own bye week and then have them play each other the week after the bye? Then nobody gets an unfair advantage and it is easy for people to remember.  Of course, we are talking about the NFL and common sense here, my bad.  On a good note for Roger, in a very scientific poll I did on Twitter (@yardsperpass) people thought that Gary Bettman was worse than him. Congrats Roger, you don’t suck the most! On that high note… let’s get to the picks!

Does London finally get a decent football game?  I think it does as you could make the case that this is the best matchup in a long time as the Redskins and Bengals play over in the UK. Jay Gruden used to coach Dalton as his offensive coordinator and oversaw some of the Bengals best seasons. He has since worked the same magic with Kirk Cousins turning him into a legit starting QB as well.  Both these teams can move the football, with Cincy ranking 5th and Washington ranking 6th in yards per game. These teams look very similar to me, but the public is all over the Bengals… So, I will zig when others have been zagging and take the ‘Skins and the points.

The 4-2 Chiefs travel to Indy to take on the roller coaster that is the 3-4 Indianapolis Colts.  This game most likely will follow the same pattern every Colts game follows. The other team will put up points, the Colts will fall behind, late in the 2nd half Chuck Pagano will realize he has one of the 5 best quarterbacks in the league and will decide to let Andy Luck take control.  Luck will mount a furious comeback that either gets the win, or just falls short. The reason I am going with the Colts here is that Andy Reid, while being an excellent coach, typically messes up the clock at the end of games. If there is one guy you need to use the clock effectively versus, it is Luck, so give me the Colts and the points.  By the way Moncrief being back will be huge if he plays.

The Raiders make the long trip across the country to Tampa Bay to take on the Bucs in an early for them 1pm start.  Somehow Oakland is 4-0 on the road and only 1-2 at home. While the Bucs are 3-1 on the road and 0-2 at home. If we go by those records it is an easy win for the Raiders. But if we look a little deeper we can see some cracks in the Raiders armor.  While their offense is good… they are last in the NFL in total defense and are outgained by an average of 60 yards per game.  While the Bucs outgained teams by almost 20 yards per game and are 13th in both offense and defense.  The public also loves the Raiders and as I like to remind people, Vegas wasn’t built by winners.  Give me the Bucs at home. 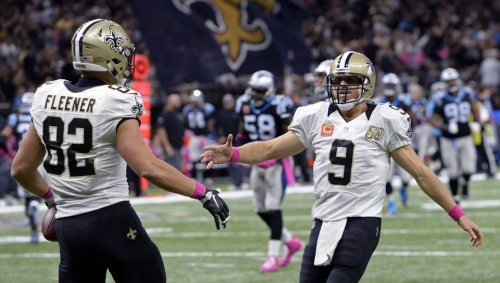 Playing Drew Brees in the Superdome is always a dangerous proposition. (Getty Images)

I really like the Seahawks here.  I know betting against the Saints in the Superdome is a big no-no, but Seattle’s defense has been excellent all year and it has been their offense holding them back.  Going against this awful Saints defense which has allowed over 27 points in 5 of their 6 games will be just what the doctor ordered.  I also think it is great that the line is 2.5 and not 3, because I could definitely see the Saints getting the score close in garbage time.  It is going to be a big day for Michael on the ground as the Seahawks make the long trip home a happy one.

Who would’ve guessed at the beginning of the season that this would be a matchup of teams with winning records as the Lions travel south to take on the AFC South leading Texans.  3 of the Texans 4 wins have come at home vs the Bears, Titans, and Colts. Not exactly murderer’s row there. While the Lions aren’t exactly world beaters either, they have at least beaten the Eagles and Rams. Theo Riddick should be back to full strength for the Lions and has to be licking his chops going against the 29th ranked rush defense. Finally, look at the differences in quarterbacks… Stafford vs the money stealer that is named Brock Osweiler. I can’t believe I am taking a Jim Caldwell coached team on the road, but let’s be honest, the real genius is Jim Bob Cooter!

Hey did you know that the Jets QB went to Harvard? And that is about all that I want to talk about for this game.  Poor Geno Smith, finally gets his shot and then tears his ACL and is out for the season.  Did you know that 2 tickets for this game are going for under $25. That means it would cost you more to go to IMAX or a 3D movie than to go to a NFL football game. Granted, the movie would probably be more fun.  Why am I still writing about this game, I’m taking the Brownies.

Game of the day as the 6-1 Patriots make the short trip to Buffalo to take on their friendly rivals in Western NY. The Bills are the only team to beat the Patriots this year, albeit it was without Brady and with a healthy McCoy.  Both of those will appear to be different on Sunday as Brady will be there and McCoy is looking like he will be out with a hamstring injury. This game was quickly bet up to 6.5, but then has dropped to 5.5 in some places with still the public being huge on the Pats.  When the line drops, but the public isn’t changing that means the sharps are causing the action.  I don’t think that the Bills win here, but I think that it’ll be close.  The Bills played the Pats very tough in their 2nd game last year and I think that they can do the same at home on Sunday. 6 is just too much for a division game underdog.

The Cardinals, fresh off their thrilling 6-6 tie on Sunday Night Football come to take on the biggest surprise in the NFL right now, the 1-5 Carolina Panthers. I really do think that the Panthers are better than a 1-5 record, but I also think that Arizona is better than 3-3.  The Cardinals struggled against Seattle’s top notch D, but their D has also turned it on as well, ranking 2nd in the NFL in yards allowed. A top tier defense is not exactly what a Carolina team that is struggling wants to see.   I feel as though Vegas has this line right on the money, but I am going to lean towards the Panthers because they are at home and because I feel like their size can cause some problems for the Arizona D.

Joey Bosa and the balanced Chargers go for the season sweep of the Broncos. (Getty Images)

The best worst team in the league, The San Diego Super Chargers travel to the mile-high city to take on their old AFL rival the Denver Broncos.  It is kind of amazing the ways the Chargers have found to lose games this year, but if you look closely, you will see that they are on a 2 game win streak with wins over these Broncos and the Falcons in Atlanta.  The Chargers can put up points. Denver had lost 2 in a row before beating the Texans easily last Sunday.  Trevor Siemian at quarterback makes a huge difference for the Denver offense, but they will be without top running back CJ Anderson who had knee surgery. Big shoes for their rookie RB Devontae Booker to fill.  I think that’ll be too much of a drop off for a team that relies on the run game and defense like Denver does… Give me the Chargers.

The NFL in their brilliance only has 2 4 o’clock games this week… but at least they are good ones as the late national game will be the Packers traveling to Hotlanta to try and slow down Matty Ice and the Falcons. Atlanta is your typical shootout team, a ton of offense and a Swiss cheese defense.  Green Bay however, has been a defensive team this year with their 7th ranked defense keeping them in games, while Rodgers has struggled due to injuries and a non-existent run game. I thought that this game would at least be Falcons by 4 or 5, just due to how easily they score points.  Sure, they have lost 2 in a row, but they were to a good Seattle team on the road and at home to the sneaky good Chargers.  I think people are still expecting superstar Aaron Rodgers to break out, but I don’t see it… I think the Packers will continue to struggle on offense and they have no chance at outscoring the Falcons.

The NFL is hoping that getting America’s team on Sunday Night Football will help ratings as the Cowboys host the Eagles who are fresh off of a big win over the previously undefeated Vikings. Dallas has built their team around a fantastic offensive line and the best rookie running back in years. Rookie QB Dak Prescott has played so well that it looks like Tony Romo will be relegated to backup duty when he is healthy enough to return.  The Eagles have been playing safe football with Carson Wentz managing games and allowing the Eagle defense to be the star of the show. The Eagles have only allowed 88 points through 6 games, 3rd fewest in the league.  The strength of the Eagles defense is stopping the pass, not the run though and the Cowboys just annihilated the Packers defense last week on the ground (it had been the #1 rush defense). As much as the rest of America doesn’t want to hear it, this Cowboys team is very good and very real.  I’ll keep taking the Cowboys and will be making them my best bet of the week.

It’s a scary matchup for Jay Cutler as he makes his return on Halloween on Monday Night Football against a dominant Viking defense. The Vikings are #1 in the NFL with 16 takeaways and are playing against a QB that has been known to be careless with the football. However, if you can stop watching that great Minnesota defense, you will see an offense that has been just as frightful. The Vikings are 31st in offense (worse than the Rams!) and average less than 75 yards per game running the football.  This means that they are going to have trouble putting a bad Bears team away.  The public is all over the Vikings at only 4.5, but doesn’t this game have the feel of a 10 point win for Minny, only to be cut to a 3 point win in garbage time due to Cutler padding some stats.  It sure does to me.  I’ll take the Bears.