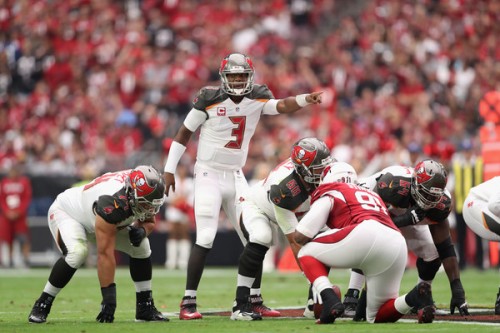 Jameis Winston has a great matchup and is one of the best value plays on DraftKings. (Getty Images)

Hello again, Week 8 is here and it marks the halfway point of the season. I may have been a week late on the Bortles pick last week. He could be the QB#1 this week after all that garbage time on Thursday. But, as usual I’m focusing on the Sunday 1pm slate this week, there are 6 teams on bye and there’s an early 9am game so there are only 10 games on the slate this week. As always there are the obvious and not so obvious picks and I’m here to help you navigate through all these matchups and find the guys that can get you those big numbers and get you above the cash line in your tournaments.

High End
Aaron Rodgers (GB) – $7500
This matchup has the highest over/under of the week, currently at 52.5. This is projected to be a close game with Atlanta getting a 3-point advantage at home. Green Bay’s running game is borderline non-existent so Rodgers will be throwing the ball a lot. He had 56 pass attempts last week which is his highest all season. The Atlanta defense has given up the third most fantasy points to QBs this season.

For this price and against the worst team in the NFL this pick is way too tempting for me to not include this week. Fitz knows that he’s on the hot seat and has to play better. This matchup could be a step in the right direction if the offense is able to get on the same page. His stats aren’t worth mentioning, but according to media here in NYC Brandon Marshall wore a
FitzMagic shirt to a press conference earlier this week so at least we know he has the support of his number one wide receiver.

Jameis Winston (TB) – $5700
By far my favorite QB pick of the week. His value allows you to be able to get who you really want at other positions. He has a decent matchup at home against an Oakland defense that has been exposed in the past this season. The Raiders defense is still allowing an averaging over 300 passing yards a game this season.

High End
Ezekiel Elliot (DAL) – $7200
Elliott went up against a highly ranked Green Bay run defense last week and still ran for over 150-yards. In his last 4 games he hasn’t rushed for less than 130-yards. Averaging 5-yards per carry. Ezekiel is on a hot streak. The Eagles have a great defense but an average rush defense. On the season as a whole they have been averaging almost 20 fantasy points a game to running back. I think Elliot is very capable of passing that mark this week.

Solid Start
Jacquizz Rodgers (TB) – $5800
Rodgers has the starting role for a third straight week, Doug Martin is ruled out again. Putting up over 20 points again this week without finding the end zone. Rodgers is in for at least another 25+ rushing attempts this week. He broke 150-yards last week and he will look to continue his success against an Oakland team that has allowed an average of 117.5-yards per game to running backs this season.

Latavius Murray could be a great value for your Week 8 DraftKings lineup. (Getty Images)

Murray returned last week from a turf toe and immediately reestablished himself as a presence in the Raiders backfield. He found pay dirt twice proving that he is the clear goal line back. With only 59-yards on 18 attempts for an average of 3.3 yards a carry Murray is a touch down dependent play this week. But, for the price he is coming in at this week I think the risk may be worth the reward.

Devontae Booker (DEN) – $3700
We get to find out if we have another Jaquizz Rodgers on our hands this week as Booker fills in for C.J. Anderson who could be out for several weeks. Once again this season an injury opens up an incredible value play. He scored once last week and rushed for 83-yards of 17 carries. He’s up against a Chargers defense that has allowed an average of over 27 fantasy points per game to running back and 8 total touch downs through 7 weeks.

I will be paying up this week for a lot of my wide receivers. I’m not seeing much value further down the board and there have been a lot of injuries to contend with. So I’m going to pay for guys that I know are healthy and in good matchups this week.

High End
Mike Evans (TB) – $8100
I really like Evans with Winston this week and I have him solo in a few of my other lineups. He has 6 TDs through 7 weeks and his only game without one was against Denver. He’s been in double digit targets since week 2. The WR1 in Tampa is set up to have a potentially great week at home.

TY Hilton has been a target monster for the Colts and money in daily fantasy this season. (Getty Images)

Hilton has seen double digit targets in all but one game this season where he had 9 against Houston. This matchup has the second highest Vegas over/under at 49.5 with Indy as 2.5 point favorites at home. In the last 4 weeks the Kansas City defense has given up 7 passing TDs and averaging and allowed 222-yards to wide receivers. Hilton could be in for another big one this week.

Larry Fitzgerald (ARI) – $7500
Fitz has a great matchup against the Panthers this week. Carolina is allowing almost 200-yards a game and an average of 32 fantasy points to receivers this season. Carolina is a 3 point favorites at home so Vegas seems to think the Arizona will be playing from behind, which only helps Fitzgerald this week.

Solid Starts
Terrelle Pryor Sr. (CLE) – $6100
Pryor practiced fully Friday and looks to improve on last week’s performance after dealing with a hamstring issue for several weeks. The Jets defense has been less than sensational this season allowing the third most total yardage to receivers so far this season.

Michael Thomas (NO) – $5000
Drew Brees is at home this week so expect him to put up some points because New Orleans always seems to play better in the dome. Thomas has been a productive target these past several weeks generally out performing Sneed and Cooks. In the past 3 games the Seahawks have given up an average of 230 reception yards and almost 40 fantasy points to receivers.

Solid Start
Gary Barnidge (CLE) – $3300
Barnidge has a nice matchup this week against a struggling Jets defense. He has yet to find the end zone this year and if the Browns can keep the game competitive enough he might be able to get there this week.

Bargain
C.J. Fiedorowicz – $2800
C.J. has seen an increase in targets these past few weeks and that will likely continue this week against Detroit. The Lions have given up the second most fantasy points to TEs this season.

Bargain
Arizona Cardinals – $2700
There are not a lot of great defenses to target this week. So I’m going with the cheap defense against the struggling Panthers this week. They have 20 sacks on the year and they’re averaging 15 fantasy points per game.

That’s all for this week as always feel free to comment or tweet me with any questions about your lineups or DraftKings.