Michigan’s Talented Mr. Peppers: He’s Done It All In College but What Position Should He Play at the Next Level?

Jabrill Peppers has the skill and athleticism to play all over the field, but at which position will he be most valuable?

If you have been watching college football this season, or even if you’re a casual football fan on the outside, chances are that you’ve heard of Jabrill Peppers, Michigan’s do-it-all Heisman candidate. Peppers is possibly the ideal embodiment of the “positionless football” revolution; a guy who has lined up at outside linebacker, safety, offensive weapon and returned kicks. According to information from the University of Michigan Athletic Department, Peppers has lined up in 12 different positions this season. So, the question on everyone’s mind is: what position will he play in the NFL?

To attempt to answer this question, I took a look at a variety of information, from scouting opinions to the (Wikipedia listed) height and weight of the top 20 players (according to ProFootballFocus) at running back, safety, wide receiver, cornerback and linebacker, and at what I believe his closest comparison is at the professional level.

Deone Bucannon is a hybrid safety-linebacker for the Arizona Cardinals. Bucannon was a first-round draft pick out of Washington State University, and stands 6’1 and weighs in at 211 pounds (according to NFL.com). Bucannon is a tackling machine with a nose for the football. In 2015, he accounted for 112 tackles, with 3 passes defended, an interception and 3 forced fumbles. This year, Bucannon is on pace for 122 tackles and 6 passes defended. He doesn’t have an interception or forced fumble yet, but he has forced at least one fumble in both of his professional seasons so it is not out of the question to think that he may pop a ball out in the second half of this season. If you are the sort of football fan who seeks out editorial articles to read about the sport, then you have probably come across a feature about Bucannon and how his positional flexibility is emblematic of a larger fundamental shift in football (if you haven’t come across one of these articles, here’s a good one) . So, if Bucannon is his closest comparison, and he plays a safety/linebacker hybrid, let’s find out what the scouts are saying.

NFL scouts largely believe Peppers will play a hybrid defensive position, and I think that makes the most sense for him. One NFC personnel executive pegged Troy Polamalu as a comparison for Peppers. A second scout in that article compared Peppers to Charles Woodson, and yet another scout said that he’s better than Jalen Ramsey, who was the fifth overall pick in the 2016 draft. Some of the more astute readers may have picked up that Woodson and Polamalu both won Defensive Player of the Year honors and are locks to make the Hall of Fame. Obviously it is premature to be anointing a college player as a future Canton inductee, but those are the sort of expectations people have for a player as gifted as Peppers. If you’ve come this far, you probably are curious as to where Jabrill Peppers might end up being drafted, and that’s certainly the next piece of the puzzle.

Walterfootball.com is probably my favorite mock draft resource as well as a site that I’ve been reading since high school. Right now, they are picking Peppers to go seventh overall, to the Colts, but I think he could end up going much higher. I believe that there are 4 sure-thing blue chip prospects in this year’s draft class: Myles Garrett (Texas A&M), Jonathan Allen (Alabama), Leonard Fournette (LSU) and Peppers. If you want to include the two USC kids (Adoree Jackson and JuJu Smith-Schuster), I wouldn’t put up much of a fight on that. Currently, the Browns have the first overall pick and I have to believe that would be Garrett. The next two picks are currently San Francisco and Chicago. Walterfootball has them taking DeShone Kizer (Notre Dame) and Deshaun Watson (Clemson), respectively, but I am not so sure that will end up being what happens. I think that Peppers is an elite talent, and both of those teams need help in the secondary. Neither Kizer or Watson should be considered a sure thing at this point, and we have seen teams have success with quarterbacks who fell out of the first round in recent years (I’m looking at you, Seattle, Dallas and Oakland). I am not going to try to predict the future, but my point here is that any team after the first overall pick could easily take Peppers, and once Garrett and Allen are off the board, I believe Peppers becomes the best player available (unless the team drafting has a desperate need for a running back, then Fournette might make the most sense for them). Regardless, Jabrill Peppers is a top-four draft prospect in my eyes, which is the final piece of information I need to figure out where he will play in the NFL. 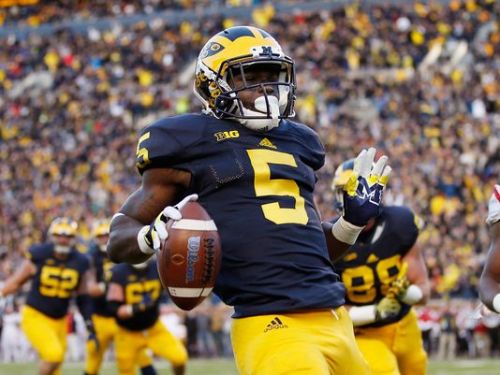 Peppers is a monster with the ball in his hands, but could he make the biggest impact on the pro level on the defensive side? (Getty Images)

If all things were equal, I have to think that Peppers would want to play in the NFL as an offensive weapon, like he does in college. Offensive players do get most of the glory. However, all things are not equal. I see Peppers playing the hybrid safety-linebacker position that many scouts are prognosticating for him, possibly moving into the slot to play some corner (think what Tyrann Mathieu does). If Peppers is going to be a top ten pick (definitely) or even a top five pick (possibly, I’d say at least 50% chance), then that is not the kind of draft capital you spend on a non-quarterback or tackle offensive player, unless they are a singular prospect, like Leonard Fournette this year or an A.J. Green.

Based on all the factors, I believe Jabrill Peppers is heading towards a hybrid defensive position that may combine the most positions as any player we have seen. We already know that there are players like Mark Barron and Deone Bucannon out there who play a safety-linebacker hybrid role. But imagine a player who can play that position, and move down into the slot, or even outside if the scheme dictates it. It is not hard to see why NFL Defensive Coordinators are embracing positionless football. When you have a player like Bucannon or Peppers on the field, your base set (4-3 or 3-4) becomes your nickel look without swapping any personnel. That ability negates much of the advantage that an offense gains from running a no-huddle approach; by being able to change scheme without substituting players, the advantage of the no-huddle goes from two-fold (fast pace and the defense is unable to substitute players) down to the singe pace advantage.

It is possible that we have not seen a more versatile player than Peppers ever enter the NFL. In the early days of football, it was much more common to see a player line up at multiple positions, or even on both sides of the field. The game has changed so much since then that it is unfair to compare a player like Jabrill Peppers to the athletes of the past. Peppers is the first player I can remember being drafted as a hybrid player. Even Bucannon was drafted as a safety and encouraged to play a hybrid position by his coaching staff. For a team to spend a top draft pick on an openly multi-positional player signifies the beginning of an era. Much like Michael Vick signified the beginning of the era of the mobile quarterback by being a high draft pick, Jabrill Peppers will signify the true beginning of the age of positionless football by being a high first-round draft pick.