A Moment Stolen in Seattle 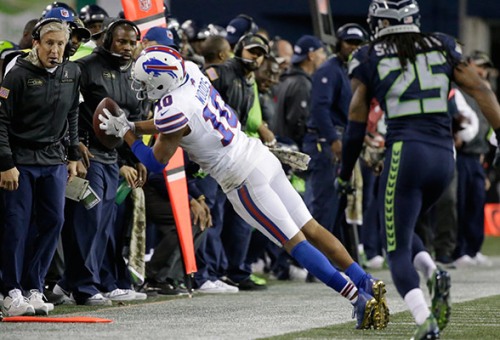 A great Robert Woods performance is one of many that have been thrown in the background because of bad officiating. (Getty Images)

In another world, I’d spend this column writing about how Tyrod Taylor just played the best game of his career. How he patiently was able to break down the defense taking what the they gave to him all night. How he did it against the league’s best defense on the road on Monday Night Football. I’d write about how the Bills offensive line spent the night shoving around Seattle’s defense. I’d write about how LeSean McCoy looked healthy and special again. About how Robert Woods just dominated the vaunted Seattle secondary as a lead receiver and put up 10 catches and 162 yards. I’d write about how the Bills offense finally looked like the embodiment of an efficient ground and pound offense we’ve all been waiting for. About how the defense, after giving up 28 points in the first half only gave up 3 in the second half and got pressure to Russell Wilson. About how Lorenzo Alexander just got his 10th sack in the 9th game of the season. Or about how Shaq Lawson just got another sack and looks really good. But I’m not. Because the officials just sucked the life out of the best Bills performance in years.

It’s truly incredible how much the NFL allows officiating to affect its product. Monday’s game was really good by any objective measure, probably one of the games of the season so far. And it wasn’t just about how valiant the Bills were fighting back but also how Seattle (aside from the exploits of new Buffalo Public Enemy #1 Richard Sherman) played a hell of a game. The sports world should be buzzing about not only what the Bills did but about the return of the Seattle passing game, two incredible Jimmy Graham one handed TD catches and the way Cliff Avril completely took over at the end and saved the game for them. It was a great game from the first second to the last.But that’s not the story. Instead we’re talking calls from officials so bad and so inconsistent that it leaves fans thinking the games are fixed. After Richard Sherman goes after Dan Carpenter’s knee with no unnecessary roughness call and the officials stand over the ball on the ensuing long enough to basically force the Bills into taking a delay of game penalty, followed by Robert Woods getting called for the weakest taunting call you’ll ever see and how can any Bills fan not think Monday’s game wasn’t tilted against us? The NFL can do all the studies it wants trying to figure out why their ratings are dropping; it’s a waste of time and money. They just need to look in front of their faces. Not only is the NFL’s product often bad but even when it is good it’s marred by bad officiating. And the fans are left to just deal with it, get pissed, get over it and come back a week later. It’s a crap deal and fewer and fewer people are willing to sign up for it.

But I digress. The Bills did plenty in this game to cost them the win from a bad interception by Tyrod because of a miscommunication with a receiver to the offensive line not being able to hold up on the biggest plays of the game at the end. Over the bye week, after the anger has slightly alleviated we’ll all be able to analyze this game, both the good and the bad, a little more clearly and try to figure out what it means for the Bills and their playoff chances going forward. We have two weeks to simmer on what could’ve been if they pulled off this win. We could’ve spent two weeks talking about how the Bills just pulled off one of their biggest wins in recent history. Instead Bills fans are left to ponder if this moral victory will gain any meaning as the launch point for a playoff berth or instead will just become part of Buffalo’s long history of feeling screwed as Bills miss the playoffs yet again. It’s up to the Bills to get better from this and turn this game into just a blip on the radar of their journey back to the postseason by winning 6 more games. But it’s up to the officials and the NFL to get it right the first time and prevent situations that make entire fan bases feel like this. Because it’s just not right.