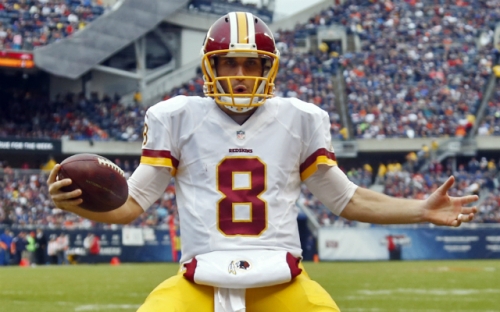 Cousins and the Washington offense look to keep things rolling in a momentous meeting with the Packers this weekend. (Credit: USATSI)

I’m going to admit right off the bat that week 10 was not kind to me. Hopefully the only pick you took away from last week was Jordy Nelson. Other than that, I let you down on pretty much every other pick. Week 10 might have actually topped ‘way off week three.’ Bad weeks are bound to happen in daily fantasy, especially with football. The only thing to do now is hop back in the saddle and move on to week 11. And for the record, I’m blaming the super moon.

The last time Andrew Luck played against the Titans was week 7. He earned 30.8 fantasy points and threw for  3 TDs on the road. Luck will have the home field advantage this time around and he’ll be going against a Tennessee defense that has failed to improve. They’ve given up 20+ points in the past 5 games.

The Packers have given up 8 passing TDs in their past 3 games. After tying Cincinnati in week 8 and beating a tough Minnesota team last week, Cousins will look to keep the momentum going at home this week against a conference rival. Kirk hasn’t put up less than 18 fantasy points since week 1. With a floor like that it’s he’s hard to not play this week.

The 2016 king of garbage time is at the lowest price he’s been all season. He has 7 TDs and hasn’t thrown for less than 250-yards in his last 3 games. The Lions are coming off of a bye this week so they should be prepared to pick apart the Jaguars defense early which means Bortles will be playing catch up. The Lions defense seems to be improving but they still rank 3rd in the league for the most passing TDs allowed this season with a total of 20 through 10 weeks.

Le’Veon Bell is expensive, valuable, and a hell of a lot of fun to watch. (AP Photo/Don Wright)

Normally I would stay away from the a running back this expensive but I cant help myself this week. Combining a value QB and some lower prices guys at WR I can easily fit Le’Veon in to a lot of my lineups. Cleveland has allowed 7 rushing TDs through their last 4 games and weather maybe be a factor in this one. The forecast is showing around 25mph sustained winds which would hurt kicking and passing games.

I like Shady coming off of the bye this week. His price is a little high for me but I’ll be taking him in a few lineups anyways. Hopefully the price tag keeps people off of him and keeps his ownership down. Shady hasn’t scored since week 6, so he’ll likely be itching to find pay dirt this week. Cincinnati has allowed an average of 22 fantasy points and almost 100-yard a game to RBs this season.

I’m always a little nervous when putting a New England running back into my lineups, but this matchup is to good to pass up. Blount leads all RBs with 37 rushing attempts in the redzone and the 49ers rank last in the league for rushing TDs allowed with 13 total this season.

The Giants are on a 4 game winning streak after starting 2-3. They will look to extend that steak to 5 games at home this week against a struggling Bears team. It appears that Odell might be having fun again after a rough start to the season. The only thing that concerns me is the weather with sustained winds around 20mph. I’ll be checking the weather Sunday morning but, either way that only eliminates the deep ball and even on short routes Beckham as the ability to make huge gains after the catch.

Jeremy Maclin has been officially ruled out of Sunday’s matchup with Tampa Bay. That gives Hill the bump up into the WR1 spot this week. Tyreek has 20+ fantasy points in the past 2 of 3 games and with Maclin out that only increases his targets and production this week. While the Chiefs are known to rely more on the run, getting a WR1 at this price is a deal. I’m expecting high ownership on this one.

Since returning to play week 9, Eli Rodgers has 145-yards and 1 TD. Not a bad stat line for a rookie. Antonio Brown is still the obvious go-to for Big Ben but I think Rodgers has jumped Sammie Coates who’s put up 2 fantasy goose eggs in the past 2 weeks.

I have Kirk Cousins stacked with Reed this week. It’s a little odd feeling when you’re playing a TE/QB stack and the TE is the more expensive one. Regardless, if they combine for more than 35 fantasy points I’m getting my money’s worth. Green Bay has been vulnerable to TEs this season landing in the bottom 1/3 of the league in yardage allowed and TDs against from TEs.

With Gronk out of the equation for Week 11, Bennett looks to continue his Pro Bowl-caliber season. (Credit: Ron Schwane/Associated Press)

Gronkowski is currently ruled out for Sundays game against the 49ers and won’t make the trip to the west coast with the team. Bennet has showed what he’s capable of when given the lead role. The way New England uses it’s TEs we can expect that he will be involved in some way. Not my favorite TE pick this week but he’s a solid option for me in this price range.

I’m honestly a bit confused the pricing of Vernon Davis these past few weeks. I understand that he’s playing second fiddle to Reed but this seems low to me based on how he’s played the last 4 weeks. He’s been in double digit fantasy points 4 weeks straight now and hasn’t dropped a target in 3. If you want to look at the whole season he has 26 catches on 29 targets. Davis is averaging less than 50-yards a game and has only 2 TDs on the season, one coming last week with a healthy Jordan Reed in the game. So, if your looking for a bargain TE this is who I’d recommend because if he gets a target he’s not likely to drop it.

The Chiefs defense has earned double digit fantasy points 5 weeks straight. They have 1 interception in each of those 5 games as well as a total of 13 sacks and 2 defensive touchdowns. In addition, if you start Tyreek Hill you might want to consider startng the Chiefs defense. He usually fields punts and kick offs for KC, I know returns for TDs have been scarce this year but if he manages to get one that’s double points of you start both.

This price honestly blows my mind but I’ll take it any week. This unit is much better than DraftKings seems to think. They currently rank 5th in the league for most fantasy points earned. They are tied with the Panthers for the most sacks in the league with 30 and Carolina has played one more game than the Bills. Cincinnati has allowed 28 sacks this season, second worst in the league. The people over at Pro Fantasy Football have the Bengals offensive line ranked 23rd in the league. Their only Achilles heel this season has been points allowed. I’m going to have lots of the Bills defense this week.

That’s it for week 11. If you have comments, questions, complaints or even a good joke feel free to tweet or comment. See you next week.