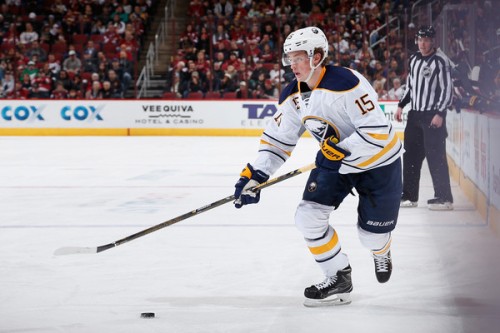 Who cares if he hasn’t played yet this year? I’m still very much thankful for Jack Eichel. (Getty Images)

I’m a simple man, so when it comes to defining what I’m thankful for in the sports world the answer is simple: I like it all. But there are a few things that stand out:

While the Sabres wunderkind hasn’t played yet this season, his absence has only made me appreciate him even more. The lack of Jack on the ice not only has lead to less goals but less eye opening moments. I miss the end to end rushes, the wrap arounds, the absurd slapshots, Rick Jeanneret screaming “Yeichel!”.  Thankfully the long wait is finally over and hopefully he can add to that highlight video very soon.

Jeff Fisher has brought so much more joy to my life, way more than the coach of the LA Rams should. But this guy is just special. From the hilarity of watching him on Hard Knocks with his 7-9 Bulls**t speech;  or making breathtakingly bad decisions on a week to week basis, one of which helped get the Bills a win; or holding Rams fans hostage as he inexplicably held Jared Goff out in favor of Case Keenum until this week for some reason, to him sporting this incredible look in the above picture, Jeff Fisher has had a year to remember. And for that I salute him.

3) The “In The Hunt” Playoff Graphic

On recent Hard Foul Podcasts and Hard Foul Bills Shows, I’ve lamented with my co-hosts about how tired I am about the Bills constantly being on the “In the Hunt” graphic they show during during games on CBS or FOX to display who’s still in the playoff race. And it does suck to never be in one of those 6 playoff slots as the season goes on. However for this particular Bills season, as tumultuous as it’s been, I’m pretty happy that the Bills are still in a position to make a push for the postseason. Of course it can all come crashing down with a loss or two. But the Bills kept hope alive and in Week 12 of the season I’m happy about that.

Following Leicester City this season was some of the most fun I’ve ever had watching sports. (Getty Images)

It’s been 10 years since this commercial made me a soccer fan and it’s been a great run. I’ve fallen more and more in love with the sport as the years pass and each new year has brought new moments for me to cherish. From watching the US Men’s National Team end Spain’s 35 game unbeaten streak and pushing Brazil to the limit in the 2009 Confederations Cup to Sergio Aguero’s improbable last minute goal in the last minute of the last game of the season to win Manchester City the English Premier League title in 2012, the sport has been incredibly good to me. But I’m not sure any of that tops what happened this year. If you don’t already know the story, Leicester City had 5000:1 odds to win the English title. It was basically considered impossible. And yet game after game they continued to win, and game after game I watched. Didn’t matter if the game was 7:30 AM, I was there. I was obsessed with their story. And to watch them actually win the whole thing was about a surreal a feeling sports has ever given me. Well except for one thing.

A moment I’ll always be thankful for. (Getty Images)

The greatest moment of my career as a sports fan happened this year so you better believe it’s going on this list. I’m not sure if words can accurately describe my range of emotions as a fan of LeBron James watching his Cavaliers fall behind 3-1 and making history to overcome that deficit to win the NBA Championship. I’ve tried to write a full column about it and each time I fail miserably. I’ve never been more resigned to losing in the days and hours after the Cavaliers lost game 4, and that’s saying a lot for a Bills fan during the playoff drought. It was impossible for them to come back. The Warriors were unbeatable. And then they weren’t. I still shake my head when I think about it and I’ll probably never stop. Until the Bills or Sabres win a Championship or at least make the Finals or Super Bowl again, those 2 weeks in June 2016 will be impossible to beat. And for that I thank you LeBron James and Kyrie Irving for being great and the Golden State Warriors for melting down enough to make it happen.