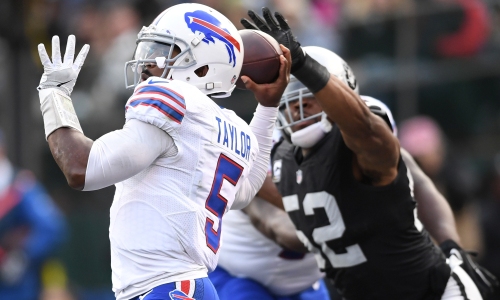 Tyrod Taylor’s interception after Khalil Mack tipped his pass was the icing on the collapsing Bills cake. (Getty Images)

There was a unique moment in the middle of the 3rd quarter of the Bills game against Oakland. It happened so quickly that if you blinked you may have missed it. Prior to the game, opinion was split amongst Bills fans as to what would happen against the Raiders. One faction felt that Oakland was a superior team and it would be quite the upset to be able to take them out. The other side thought that Oakland had been lucky to get where they are and that the Bills had a good chance to get a big win. Most fans were somewhere in between. But when the Bills scored to take a 24-9 lead in the 3rd quarter, for the briefest of moments we were unified. Unified in our disbelief that the Bills had a 15 point lead on the road against a 9-2 team. Unified in the possibility that the Bills might actually be good, and unified in the thought that this might finally be the year for the Bills to make the playoffs.

And just like the Bills, over the next quarter and a half those thoughts disappeared.

The main feeling the day after the Bills’ stunning (but not so stunning) collapse is one of bitter disappointment. But as it was it was happening amongst the anger and shock I felt, I found myself experiencing something I didn’t expect: abandonment. At 24-9 I was so proud of the Bills. I wasn’t dumb enough to assume the game was in the bag, of course, but I also felt confident in the thought that even if the Bills were to blow the game they would’ve played a game that fans could be proud of, a game that would’ve taken a herculean effort from Oakland to overcome. Instead what we got was 29 straight Raiders points that couldn’t have happened any easier or any faster if the Bills had actually left the stadium and flown back to Buffalo early. They showed no resistance defensively and no resolve offensively. Tyrod Taylor was consumed by the moment, unable to make the play or two necessary to stop the bleeding. Perhaps it wouldn’t have mattered because the defensive dam had already burst, but I have a hard time remembering a set of drives more than ill timed than what the Bills did during Oakland’s run:

That, combined with a Bills pass rush that got swallowed up by Oakland’s offensive line and a Bills secondary that offered little resistance and allowed Derek Carr and his receivers to finally get in sync, it was like the entire team stopped playing.  I’m used to watching terrible Bills football but having to watch that after the Bills had spent 2 and a half quarters building hopes up to a fever pitch was cruel and unusual punishment.

Bills fans after 16 (soon to be 17 years) of no playoffs don’t ask for much. Yes we want to be relevant again but above everything else we want a team that fights. A team that wants it as much as we do. I know these guys are professionals and want to play well, and I typically hate those who try call out the effort of a team but after watching yesterday I’d a hard time rebutting anyone that makes that case today. The game was crying out for anyone to do something. Try just one deep bomb to Sammy, and we don’t care if you force it. Try to generate a little pressure on Derek Carr, and bring the house if you have to considering the secondary was getting roasted anyway. Even try a fake punt or a trick play of some sort like Andy Reid did for his Chiefs yesterday! Don’t just sit there and let the Raiders deluge roll over you like a flood. Yes, Oakland is very good and they deserve a lot of credit. Their offense is a bomb just waiting to go off and Derek Carr is the perfect trigger man to light the fuse. Their home crowd was raucous and reminded of the Ralph during the occasional big home win. Khalil Mack is ridiculously good. But the Bills didn’t have to make it that easy. Those aren’t valid excuses for no one to step up and show some fight for their desperate fan base, especially after they gave us a glimpse of what could be earlier in the game. The Bills on Sunday were the absentee father that shows up after years of disappointment, buys his kids an Xbox One and says he’s back for good, only to leave for a pack of cigarettes and disappear again. In the days and weeks to come to we’ll comb through the wreckage of another Bills season to try to figure out who we want to fire and blame. We’re Bills fans; we’re used to that. We’re used to disappointment. But yesterday was a uniquely cruel way to disappoint.