A rough night from Stephon Gilmore and the secondary left the Bills with no shot at winning Thursday. (Getty Images) 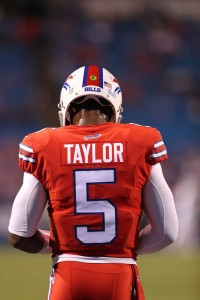 Tyrod Taylor spent most of the night searching for an answer, despite a gaudy stat line. (Getty Images)

The Bills offense was empty calories while the Jets were a wholesome meal.

The 3 best plays of the game belonged to the Bills; Tyrod’s two long throws and Robey-Coleman’s fumble return for a touchdown. The problem is that the next 20 plays on the list belong to the Jets. The Bills for all of their big plays lacked consistency of quality from play to play and drive to drive. The big plays kept them alive and provided the crowd with a thrill. But they were sandwiched in between 3 and outs and complete defensive breakdowns. While the Jets, despite dealing with their disaster plays, never stopped producing, carving up the Bills secondary consistently. END_OF_DOCUMENT_TOKEN_TO_BE_REPLACED 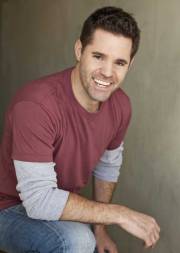 On an all new episode of the Hard Foul Sports Podcast, Evan Sally and Jim Bearor are joined by David Tuchman of Pro Football Focus. You can follow him on Twitter @TuckOnSports. We started the show recapping last night’s season opener as the Broncos took down Carolina. We then got David’s takes on his Jets, Rex Ryan and the Bills, his worst 5 teams in the NFL and much more.

If you have an Android device and don’t want to use SoundCloud there are several apps on the Play Store that our show is available on. We recommend Podcast and Radio Addict. END_OF_DOCUMENT_TOKEN_TO_BE_REPLACED 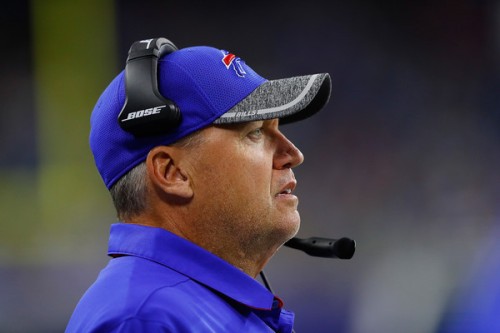 On an all new episode of The Hard Foul Podcast, Evan Sally and Jim Bearor finish up their NFL preview series, “32 Teams, 32 Questions” with the AFC East. Does Brady’s 4 game suspension put the division up for grabs for the first time in years? This week’s intro music is brought to us by The Same Sun and their new single “TRIP”. If you like what you hear check out the full track HERE and make sure to check them out on Facebook.

If you have an Android device and don’t want to use SoundCloud there are several apps on the Play Store that our show is available on. We recommend Podcast and Radio Addict. END_OF_DOCUMENT_TOKEN_TO_BE_REPLACED

The “Same Old Browns” Are Building It Wrong

The concept, in and of itself, isn’t bad. Build from the lines out. Shore up the middle of your offense and defense, and supplement talent in the trenches with reliable players outside.

On Sunday afternoon, against the 4-12 Jets, coming off a 7-9 season, the “Play Like a Brown” Browns, well, ummmmm, played like Browns. And that “concept” of how to build a sustainable winner proved to be far from reality. 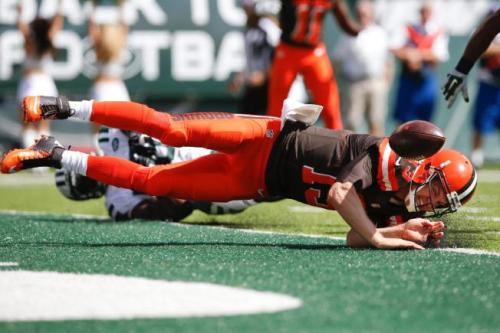 Josh McCown fumbles in the endzone and suffers a concussion. (AP Photo)

Ray Farmer and Mike Pettine have consistently defended themselves for building a roster devoid of playmaking talent. They don’t seem to care if they don’t score, as long as they’re able to block and rush the passer and defend.

END_OF_DOCUMENT_TOKEN_TO_BE_REPLACED

Intro to The Hard Foul 32

In recent weeks I’ve called the Bills quarterback situation putrid, crappy, craptastic, a pupu platter  and myriad other names that would disappoint my mother. To summarize: it’s bad guys. I don’t think a single Bills fan would disagree. But is it the worst in the league? That’s a question more up for debate. When sifting through the bottom of the QB barrel there are definitely a lot of bad QBs out there. We placed the Bills last because A) Even though Matt Cassel is a “veteran”, he hasn’t performed well or done any real winning since 2010, B) EJ Manuel, while he’s only had 14 career starts, the vast majority of his games have been very bad with him only topping out at mediocre in the others, and C) Tyrod Taylor is a complete unknown but the track record for QBs taken in the 6th round (except for that Brady fellow) is pretty bad. As of right now Matt Cassel is the presumptive favorite to start Week 1 so let’s dig a little deeper.

END_OF_DOCUMENT_TOKEN_TO_BE_REPLACED

There is nothing like a quarterback battle to kick off training camp. It brings out the best in players. The repetitions, the rivalry, the competition. There are five teams with interesting story lines surrounding the quarterback position. Two teams have battles going on, while the other three have signal callers on the hot seat.

The Buffalo Bills and Houston Texans have battles going on right now. Rex Ryan has gone as far as to not name an opening week starter until the game, while the Texans have two QBs who will most likely not be a starter for the long term. Of all the QB situations, the Bills may have the best situation for success. All you need to do is look at the playmakers around the position including the additions of LeSean McCoy, Percy Harvin, and Charles Clay. Whoever has the reins for Week 1 against the Indianapolis Colts will have one simple task: manage the game and limit turnovers. Many believe Matt Cassel has the fast track lead to be the starter as the 33 year old is the perfect fit for the Bills current situation. Opposing defenses will know what they are going up against, as Cassel will not surprise anyone with his arm strength or accuracy. With new offensive coordinator, Greg Roman, look for the Bills to bring a rush heavy attack. While EJ Manuel may be more athletic, he is prone to mistakes, and Tyrod Taylor is more of an unknown at this time.