For the good of the franchise in the short AND the long term, it’s time to give Johnny Manziel the keys to the offense for the rest of the season.

That statement isn’t an indictment of Josh McCown. McCown looked good before he went down with a concussion that has sidelined him since the first series of the season opener. There’s just simply more at play here. 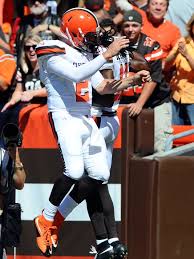 Manziel has made his share of mistakes through the first two games of the season. Ball protection is a major issue. He’s still a work in progress when it comes to standing in the pocket and going through progressions.

That said, Manziel proved on Sunday that he can win exactly the way the Browns were going to ask McCown to win: Throw the ball just 15 times. Don’t throw interceptions. Manage the game.

What’s more, Manziel gives the Browns a big-play factor that McCown doesn’t have. Both quarterbacks could have executed the throw to Benjamin on the first offensive series for a touchdown. Only one could have executed the throw in the fourth quarter – quickly eluding an untouched defender, rolling to his left, turning his body and launching a perfectly placed ball. That QB isn’t Josh McCown – it’s Johnny Manziel.

Manziel gets his first win as an NFL QB. (AP Photo)

For all of Manziel’s faults and struggles – and some were again on display Sunday, the one thing he gives you is game-changing ability. And if he can already prove that he can win games by simply managing, it’s a bonus to have his big-play ability on the field over McCown’s conservative, veteran approach.

As importantly, the Browns need to make a firm evaluation of Manziel so they can move forward at the position. They need to see his body of work over the course of the season. Will he continue to prepare the way he did last week? Will he make marked improvements in the pocket? Will he protect the ball in critical situations?

We don’t know the answers to those questions. The body of work just isn’t there to make a determination. It’s time that he gets that body of work. Nothing against Josh McCown, but it’s Johnny Time in Cleveland. For better or for worse.

This entry was posted in adambennett, Cleveland. Bookmark the permalink.