Odell and Eli Steal the Show in the Worst Way 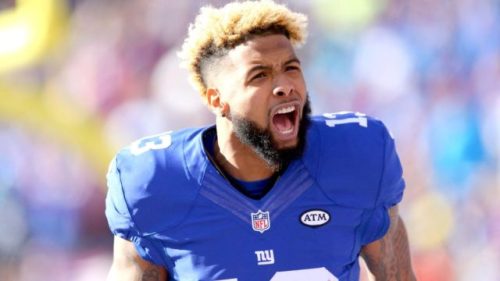 Odell Beckham Jr. continued to be a distraction in Week 4, while also failing to produce in any meaningful way.  (credit: Foxsports.com)

My biggest takeaway from this game is that the Vikings are very much for real, and their defense is arguably the best in the league. Sam Bradford was in control throughout, converting third downs and spreading the ball around nicely. As good as Minnesota’s offense looked, the lack of production from McAdoo’s offense made New York’s defense look worse than they were. Things on Spagnuolo’s side of the ball were actually going alright considering they were rolling with Trevin Wade in the place of Eli Apple, and Jonathan Casillas had a bad, costly missed tackle that led to a 14-0 Vikings lead. The way I saw it, the defense hung in there and gave Manning and the offense ample opportunities to get rolling, and yet again, Eli, Beckham, and the boys stood them up.

My second biggest takeaway is that I can see myself growing to resent this offense. The expectations were high for them even when we had no idea if Victor Cruz was going to be a factor, and now what we’re getting from Eli and Odell is exactly the opposite of everything I hoped and thought it would be. This duo is still the heart of the team, but right now that heart is palpitating. Beckham’s “this guy might be a little crazy” narrative is picking up steam, and Eli has been subpar for the past two weeks – or half the season so far, depending on how you want to look at it. Manning completed 2 of 8 against the blitz for 7 yards (all 4 of his picks have come against the blitz), and his offense converted a measly 2 of 12 third downs. Odell Beckham Jr. was on ESPN Radio today, and said he’s frustrated by his role in the offense and he’s “not having fun anymore,” which is one of a few bitter little tidbits concerning him that have popped up since Monday night.

The current situation between the Giants’ two most important players is definitely not good, that’s for sure. On a positive note though, I do like the way McAdoo chose to address it:

“The first thing is, we have to be smart with the quarterback and his decision-making,” McAdoo said, when asked a more concerted effort needs to be made to get Beckham Jr. involved. “You don’t ever want him to force balls that can make a lot of things worse. At the same point in time, it is my responsibility to make sure a playmaker like Odell has an opportunity to touch the football and we’re going to continue to work at it.”

The way he sees it, a lot of the blame should go to Eli, and I agree with him. Also, it makes more sense to take this angle because Eli isn’t as volatile as OBJ, and a harsh assessment will almost certainly not get under his skin. Eli, you don’t get a pass for this one, we’re not mad, we’re just disappointed. It makes for an uncomfortable week for Eli and his fans, but ultimately it gets brushed off. His play has been a problem, but it’s not the problem.

The elephant in the room is the dissatisfied wide receiver, which takes center stage in the national media every time. Terrell Owens, Randy Moss, Keyshawn Johnson, and Chad Ochocinco all come to mind. Typically, diva wide receivers aren’t worth the hassle, even if they’re tearing it up on the field. The only reason I’m not in full panic mode yet is because the stuff Odell is complaining about has validity to it. Obviously the way he’s voicing his opinion is uncomfortable, and could be symptomatic of a deeply flawed relationship with his quarterback and a fundamentally dysfunctional locker room. All this being said, his concerns aren’t unfounded.

If this offense is ever going to execute at the level they’re capable of, it means more targets for Odell – even sometimes when he’s double covered – and it also means both sides finding a middle ground. The effectiveness of Victor Cruz and Sterling Shepard should take away from Beckham’s targets, but not to the degree that we’ve seen to this point. Feeding him the ball won’t fix everything – winning does that – but it’s a nudge in the right direction for an offense that has been searching for answers lately. It’s a slippery slope, feeding a receiver can lead to forcing it to a receiver, which shouldn’t happen with a roster this rich with talent. The success of this team in the next few weeks will largely be determined by how big of a step McAdoo and Eli take towards getting their superstar wideout involved, and I’m more concerned that they’ll overcorrect this issue than I am that they’ll fail to address it.

At the beginning of the season, it wasn’t hard to visualize a balanced, purring version of this offense where everyone did their job, and all three pass-catchers got a chance to shine. Right now, that balance is out of whack, and the mumblings of discontent have become too loud to ignore. On top of this, Eli Manning is dropping the ball. The conversation surrounding this offense is toxic, and the offense itself might be.

All of Big Blue’s problems can be boiled down to their franchise quarterback and their star wideout. (credit: Getty Images)

Things are not well, but all it will take to quell this unease is a couple of productive games for Beckham that come in weeks where the offense achieves and sustains rhythm. Yeah, that sounds unrealistic right now, as the image of Eli looking confused and struggling to get each and every snap off is still crystal clear in our memory, but there’s a chance this could be the peak of the drama. New York’s offense shit the bed on Monday Night Football and everyone saw. The coach, the wide receiver, and the quarterback have all given their thoughts on the matter, and every sports media outlet is piecing this all together in a way that reads undesirable for the Giants offense (and rightfully so). I have trouble listening to the postgame conversation after a loss as it is, but this is on another level for me. The game happened on Monday, today is Tuesday, and I feel like we’ve seen this story covered from every angle possible. I’m ready to move on, even if the same problems persist.

Beckham will either become satisfied as his targets increase, or he’ll continue his meltdown and this shit storm will be the demise of the 2016 Giants. I don’t think he’s capable of slowing his roll, and I’m fine with that. I’ve accepted the reality that Beckham is a high-maintenance player, and while it isn’t ideal, it’s also not the worst thing in the world that he’s overly passionate about his role in the offense. He’s a peacock and McAdoo has to let him fly – while keeping a leash on him. He’s the fire that has to be harnessed properly or he’ll burn his team to the ground. Like I said, far from ideal, but this is the reality of the situation. Odell has all the volatility and raw power of Anakin Skywalker (second Star Wars reference in two articles for me), and his handling is the determining factor of New York’s season and future.

Oversimplifying things often doesn’t capture the full problem, but I have no hesitations about pinning all of this team’s problems on Eli, Odell, and Coach Ben. Expectations, ego, and emotion are at the crux of all this.  Odell’s passion is getting the better of him, Eli is missing throws and making poor decisions, and all of this is under the umbrella labelled “McAdoo”. Figure it out boys, these issues are too easily identifiable to let them derail the season.